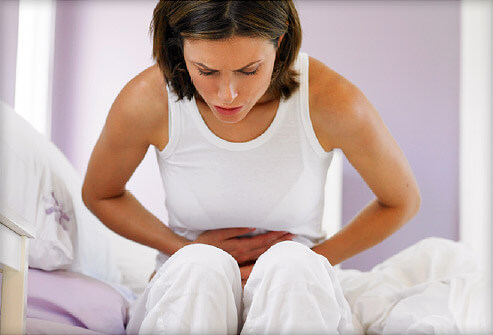 Being one of the most painful and difficult digestive complaints to treat, Crohn’s disease is a growing problem worldwide. It can be confused with Ulcerative colitis, irritable bowel syndrome and gastric ulcers.

If you are suffering from it you may find yourself quite despairing when looking for treatment solutions. This is because the cause and cure alike are almost a complete mystery to modern medicine. Crohn’s disease treatment is seen as an attempt to reduce symptoms, while a Crohn’s disease cure has still not been discovered. The time has now come to open up your options.

Today I will share with you the holistic view, covering food, herbs and mind-body medicine giving you a new ray of hope. Many people have completed our program and reported success at relieving the symptoms of Crohn’s disease.

The key to healing is to make the complex simple, and this is what I will aim to achieve.

Simple natural solutions may require a little effort but can be well worth the reward.

Life’s journey is all about learning, growing and ultimately healing,

Get our recommended program for Crohn’s disease on Amazon

What is Crohn’s Disease

Crohn’s disease (CD) is a chronic relapsing inflammatory bowel disease. It is characterized by a transmural granulomatous inflammation (ulcers) which can affect any part of the gastrointestinal tract, most commonly the ileum, colon (small and large intestine) or both. It affects 1 in 500 – 700 of the population.

Its prevalence has continually increased over the past 50 years with the highest incidence being reported in northern Europe, the United Kingdom, and North America

It usually affects the intestines, but may occur anywhere within the Gastro-intestinal tract from the mouth all the way to the anus. The condition starts as small ulcers in the lining of the gut and these early ulcers are called “aphthous” ulcers. These are similar to mouth ulcers.

It’s more common between the ages 15 – 40 and in people who smoke. It can also run in families. It was observed that in Canadian and New Zealand populations, females are 10–30% more likely to acquire the disease than males, whereas males with CD are reported as up to three times more likely in Japan and Korea. (6) 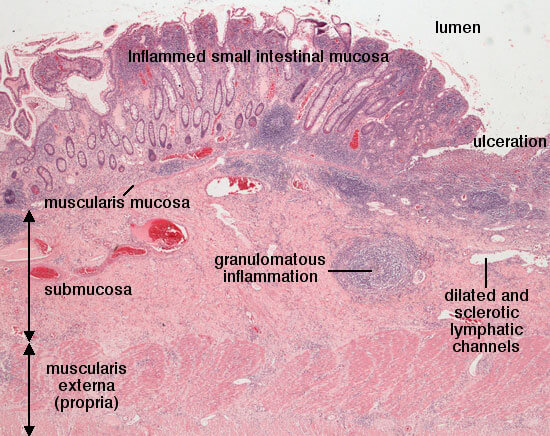 The most common Crohn’s symptoms include:

Visual investigation
Ultrasound, CT scan, and MRI can all be used, but a cross-section analysis of all three is most conclusive giving up to 90% accuracy.

Capsule endoscopy is a relatively new, simple, noninvasive imaging technique that is gaining recognition for small bowel exploration. The investigation involves consumption of a disposable, small, wireless camera within a capsule which passes through the gastrointestinal tract allowing direct visualization of the mucosa. A meta-analysis comparing the diagnostic yield of capsule endoscopy to other imaging modalities found an increased diagnostic rate of 15% over the other methods. (6)

Antibodies
Perinuclear anti-neutrophil cytoplasmic antibodies (pANCA) and anti-Saccharomyces cerevisiae antibodies (ASCA) have been found in CD patients and the identification of these markers can help differentiate CD from ulcerative colitis where diagnosis remains ambiguous. (6)

According to modern allopathic medicine, the cause of Crohn’s disease is a complete mystery. All they know is that it’s an autoimmune disorder. An autoimmune disorder is a condition that occurs when your body’s immune system mistakenly attacks and destroys healthy body tissue.

Why would the body do this?

Obviously, there must be something going on with the gut tissue that the body identifies as foreign to the body’s healthy tissue and is worth mounting an attack on. Some kind of toxin, irritant, allergen, pathogen, bacteria, or other invading microbe is what most commonly triggers an immune response.

The bacteria Helicobacter pylori can be detected in the oral mucosa or ulcerated lesion of some patients with recurrent aphthous (ulcers) like those seen in Crohn’s disease. (2)

Those who suffer from CD have chronic inflammation of the gastrointestinal tract Crohn’s disease may involve the small intestine, the large intestine, the rectum or the mouth. Because the generation of pANCA and ASCA antibodies occurs most likely from an abnormal response of the intestinal mucosal immune system to intestinal flora there appears a direct link between gut flora/microbiota.

When the gut microbiota is out of balance and overpopulated with negative bacteria like Helicobacter pylori the immune system will be activated to attack the invader, eventually becoming confused thus beginning to attack the intestinal lining itself. This will trigger a cascade of immune activity eventually resulting in the autoimmune attack.

The common sense approach would be to support healthy gut microbiota, reduce inflammation and encourage healing of the intestinal wall, supporting healthy immune responses and knocking back Helicobacter pylori.

Let’s look at how we can do this holistically using natural foods and herbs.

Pharmaceuticals
Corticosteroids are widely prescribed for the induction but not the maintenance of remission due to increasing resistance over time, patient dependence and adverse side effects with long-term use. Anti-inflammatory 5-aminosalicylate drugs also have a long history of use but have failed to bring remission or prevent relapse over time. (6)

Immunosuppressant drugs are the other primary option for the conventional pharmaceutical approach.

None of these approaches appear to address the underlying cause of the problem or promote any actual healing of the intestine, leaving surgery as the last resort.

This is where foods and herbs come to the rescue as they really have the power to heal.

We will start with food.

Fungal proportions (especially Candida) increased with disease and antibiotic use. Dietary therapy can have rapid effects on microbiota composition distinct from other stressor-induced changes and effectively reduces inflammation. Findings reveal that dysbiosis results from the independent effects of inflammation, diet, and antibiotics and this has shed new light on Crohn’s disease treatments. (7)

A high dietary intake of fats, polyunsaturated fatty acids, omega-6 fatty acids, and meats have both been associated with an increased risk of Crohn’s disease, while a high fiber and fruit diet has been seen to be protective. (6) Too much fat, especially processed trans-fats has shown to be inflammatory.

Little is known about the responses of microbial life to environmental stressors. Similarly, it is unknown whether dysbiosis resulting from inflammation is rapidly reversible. Patients with Crohn’s disease are often exposed to antibiotics and dietary changes which are likely to affect the microbiota, but the influence of these factors and their interactions with each other are not completely understood.

Dysbiotic Crohn’s disease is associated with increases in specific fungi including Candida Albicans, prior antibiotic therapy and a higher concentration of human DNA in feces. (7)

It would, however, suggest the combination of probiotics (Obligate Anaerobes) and an anti-inflammatory, anti-fungal diet and herbs could promote long-term healing of Crohn’s Disease. See the diagram below.

Don’t worry if this doesn’t make sense. It’s a little scientific and complex, but in a nutshell, let’s say this. A good Crohn’s disease diet plan will include lots of healthy micro-organisms to populate the gut, such as fruits, herbs, and vegetables. 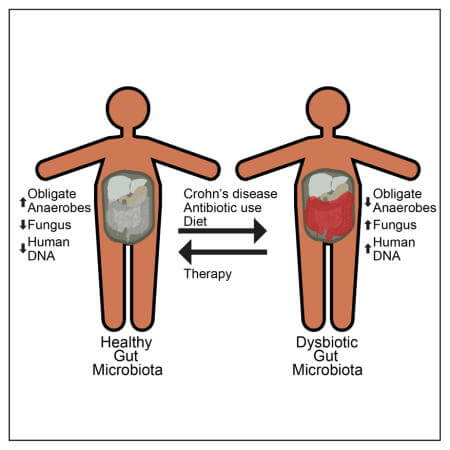 Studies give strong support to the role of tube feeding, showing efficacy similar to corticosteroids and better improvements in growth and mucosal healing. it has been suggested that tube feeding might be used not only to achieve but also to maintain remission.

Of course, this might work if you are bound to a hospital bed, but what if you want to continue with your normal active life. It would appear that the easier food is to digest the more your gut will be allowed to heal. Smaller meals of easily digestible fruits and vegetables and a lot of liquids will encourage healing. (9)

Foods to eat more of on the Crohn’s diet:

Culinary and digestive herbs you can eat often on the Crohn’s diet: 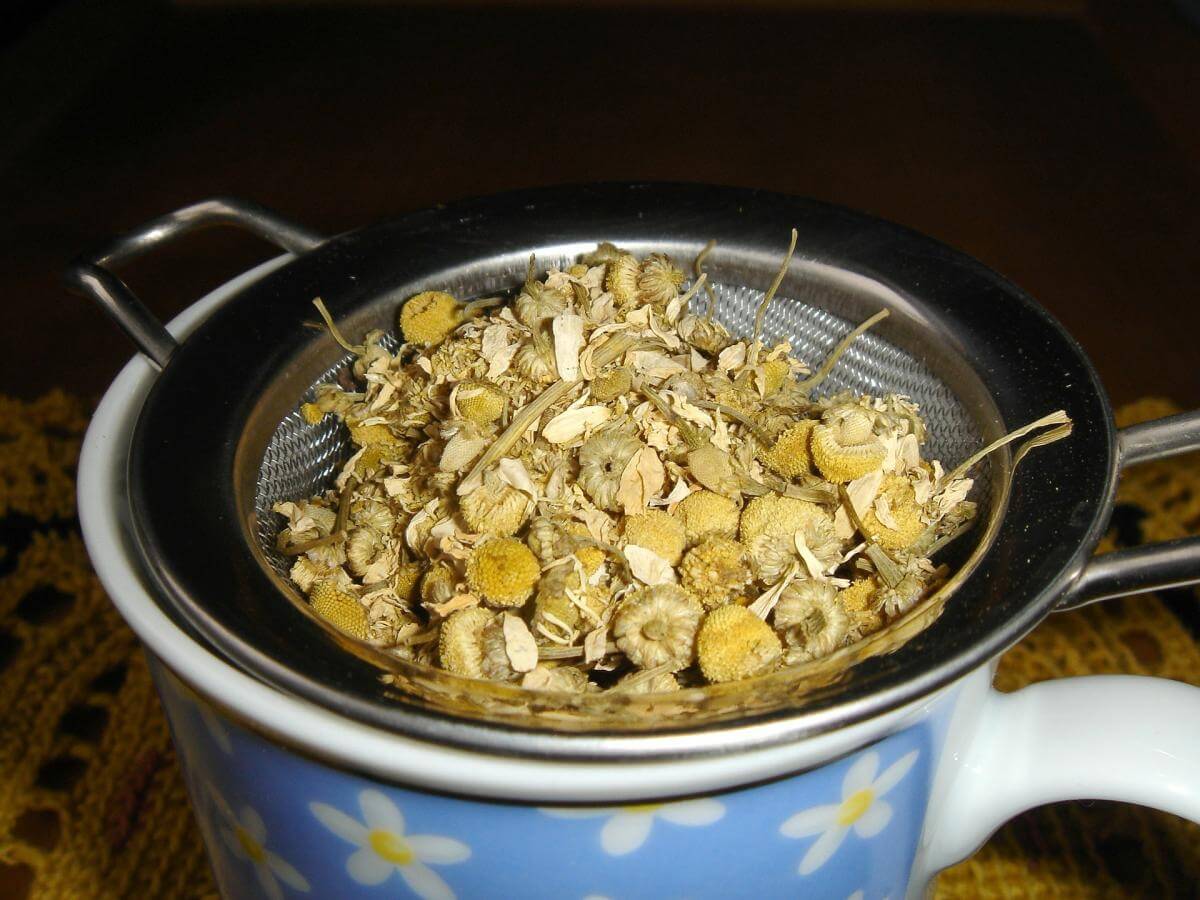 Favorable results have been widely found from the use of herbal and plant products in inflammatory bowel disease. (12) 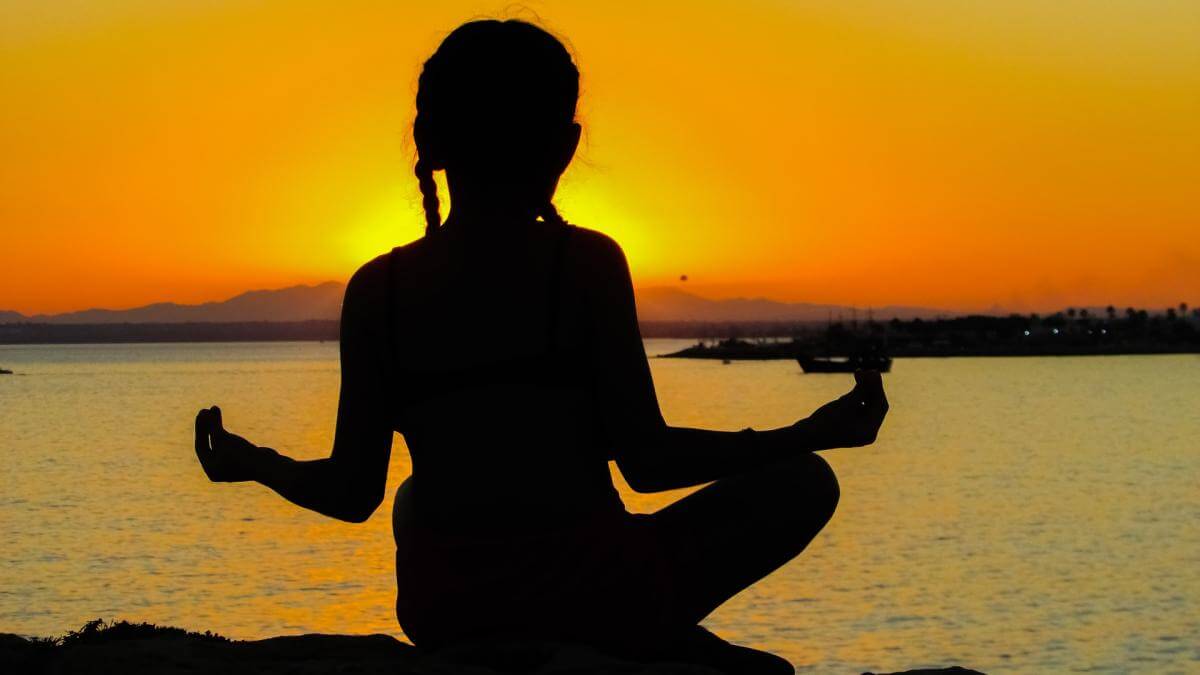 There is a powerful link between the brain and the gut. Called the brain-gut axis it comprises a neural-neuroendocrine circuit between the brain’s hunger-satiety and hormonal reward systems in conjunction with the gut microbiota, which regulates our emotions and food-decision making. However, the consumption of high-sugar and high-fat diets have overridden this energy/pleasure circuitry to the point of addiction. (13) Addiction, depression, and anxiety can all be linked to this gut-brain connection or disconnection.

You may feel worried, embarrassed, or even sad and depressed about having a bowel condition and you may, therefore, be having a psycho-somatic (mind-body) influence. The gut-brain connection is well documented and is, therefore, a major consideration.

Addressing negative attitudes and beliefs and learning to curb these influences can have a profound impact on any health condition, but especially those relating to the intestine. This is because the intestine acts as our emotional brain and our emotions can be affected by our beliefs and attitudes.

Read more about Probiotics and the Gut-Brain connection

You have a powerful mind and the healing effects of positive thinking should be used whenever possible. Try meditation, reading and perhaps some type of social activity that involves an emotional support network of kind friends.

Energy healing, massage or other relaxation technique would be well worth investigating. learning and practice. Find something that resonates with you and take the plunge.

Part 1.
Follow the Ultimate Herbal DETOX for one month while following as many of the other recommendations above as you can. You will receive a recipe booklet with dozens of suitable recipes. The Ultimate Herbal DETOX also contains the herbs Aloe Vera, Cayenne, Golden Seal, Licorice, Slippery elm, Milk thistle, Dandelion, and Wormwood.

Part 2.
After completing the one month plan you can follow up with another month of Colonaid capsules taking 4 capsules daily. During this part of the program, you should consume 100 ml of high-quality Aloe Vera Juice daily.

Follow up.
Repeat the program again in 6 months then once a year thereafter as prevention.

How to get the Ultimate CROHN’S DISEASE Program

Get our recommended program for Crohn’s disease on Amazon

An extra bottle of 120 capsules of Colonaid will be added at no charge saving you $55.00 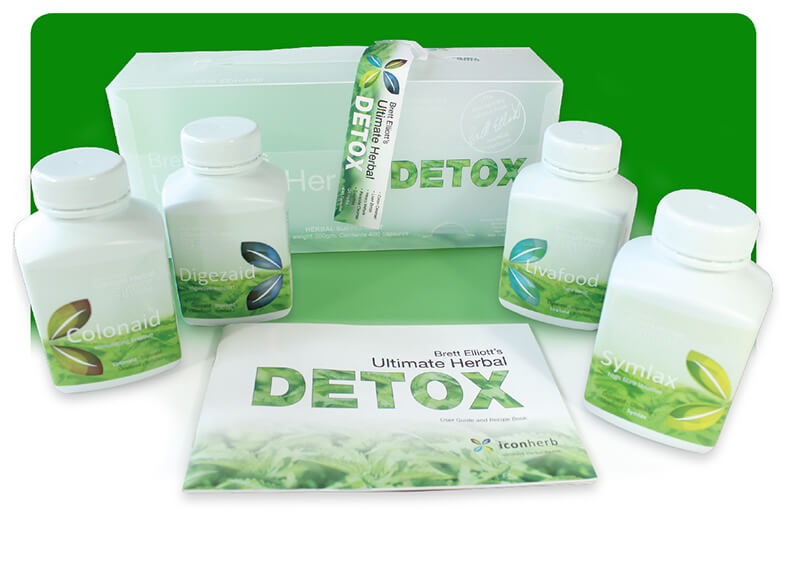 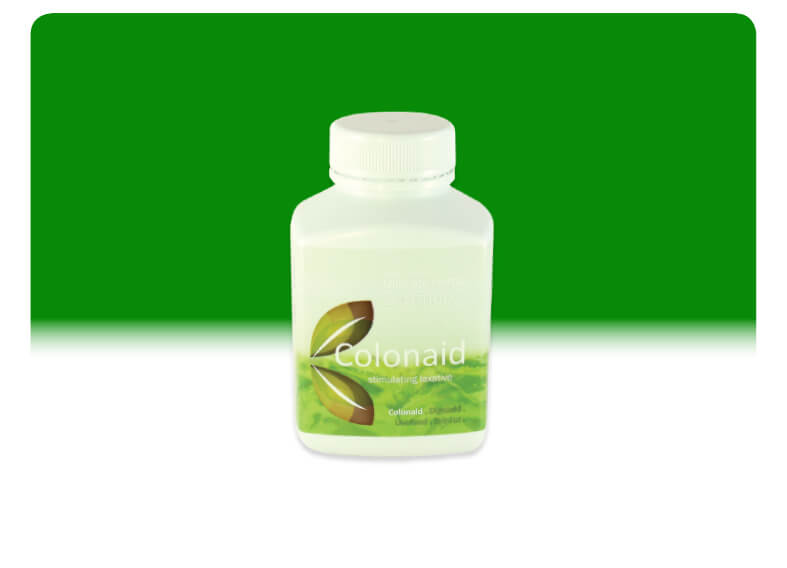 (9) Diet therapy for inflammatory bowel diseases: The established and the new. PUBMED https://www.ncbi.nlm.nih.gov/pmc/articles/PMC4734995/

(11) Effect of licorice versus bismuth on eradication of Helicobacter pylori in patients with peptic ulcer disease. PUBMED https://www.ncbi.nlm.nih.gov/pmc/articles/PMC4166824/

(13) Genes, emotions and gut microbiota: The next frontier for the gastroenterologist. PUBMED https://www.ncbi.nlm.nih.gov/pmc/articles/PMC5423040/