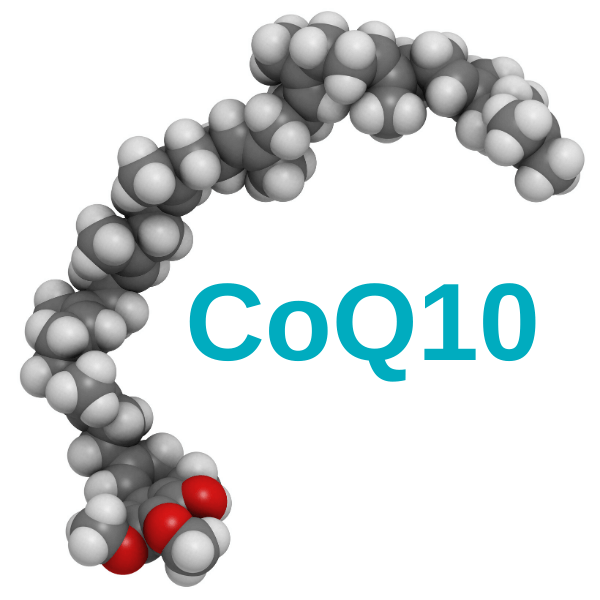 Coenzyme Q-10 (CoQ-10, Ubiquinone, or Ubidecarenone) is a naturally occurring quinone that is found in most aerobic organisms from bacteria to mammals. It was first identified in 1940, and isolated from the mitochondria of the beef heart, in 1957. Coenzyme Q10 is also known as Coenzyme Q, CoQ, CoQ10, Ubiquinone, Ubiquinone-Q10, Ubidecarenone, or Vitamin Q10. (1)

The various types of Coenzyme Q can be distinguished by the number of isoprenoid side-chains they have. The most common Coenzyme Q in human mitochondria is CoQ10. The 10 refers to the number of isoprene repeats. CoQ10 is ubiquitous in human tissues, although its level is variable. The level of CoQ10 is the highest in organs with high rates of metabolism such as the heart, kidney, and liver (114, 66.5, and 54.9g/g tissue, respectively), where it functions as an energy transfer molecule. (1)

The primary biochemical action of CoQ10 is as a cofactor in the electron-transport chain, in the series of redox reactions that are involved in the synthesis of adenosine triphosphate. As most cellular functions are dependent on an adequate supply of Adenosine triphosphate (ATP), CoQ10 is essential for the health of virtually all human tissues and organs. Coenzyme Q10 is one of the most significant lipid antioxidants, which prevents the generation of free radicals and modifications of proteins, lipids, and DNA. (1)

In many disease conditions connected with increased generation and the action of reactive oxygen species (ROS), the concentration of coenzyme Q10 in the human body decreases and the deficiency of coenzyme Q10 leads to the dysfunction of the respiratory chain, which is due to the insufficient production of highly energetic compounds, which decrease the efficiency of cells. To protect the cells and organ systems of the body against ROS, humans have evolved a highly sophisticated and complex antioxidant protection system. (1)

It involves a variety of components, both endogenous and exogenous in origin, which function interactively and synergistically to neutralize free radicals and include nutrient-derived antioxidants (Vitamin C and E, beta carotene, and polyphenols), antioxidant enzymes (bilirubin, thiols, ubiquinones, and uric acid), metal-binding proteins (albumin, ceruloplasmin, ferritin, and myoglobin), and numerous other antioxidant phytonutrients (plant-derived substances) present in a wide variety of plant foods. (1)

The Health Benefits of Coenzyme Q-10

CoQ10 deficiency can be associated with a number of human diseases and age-related chronic conditions. In some cases, an unbalanced equilibrium between CoQ10 levels and/or functional ETC leads to mitochondrial dysfunction. In other cases, deficiency in CoQ10 and its associated antioxidative activity can significantly increase the level of oxidative damage. It seems clear that supplementation with CoQ10 improves mitochondrial function and confers antioxidant protection for organs and tissues affected by various pathophysiological conditions. The ability of CoQ10 to protect against the release of proinflammatory markers provides an attractive anti-inflammatory therapeutic for the treatment of some human diseases and in aging. See diagram. (2) 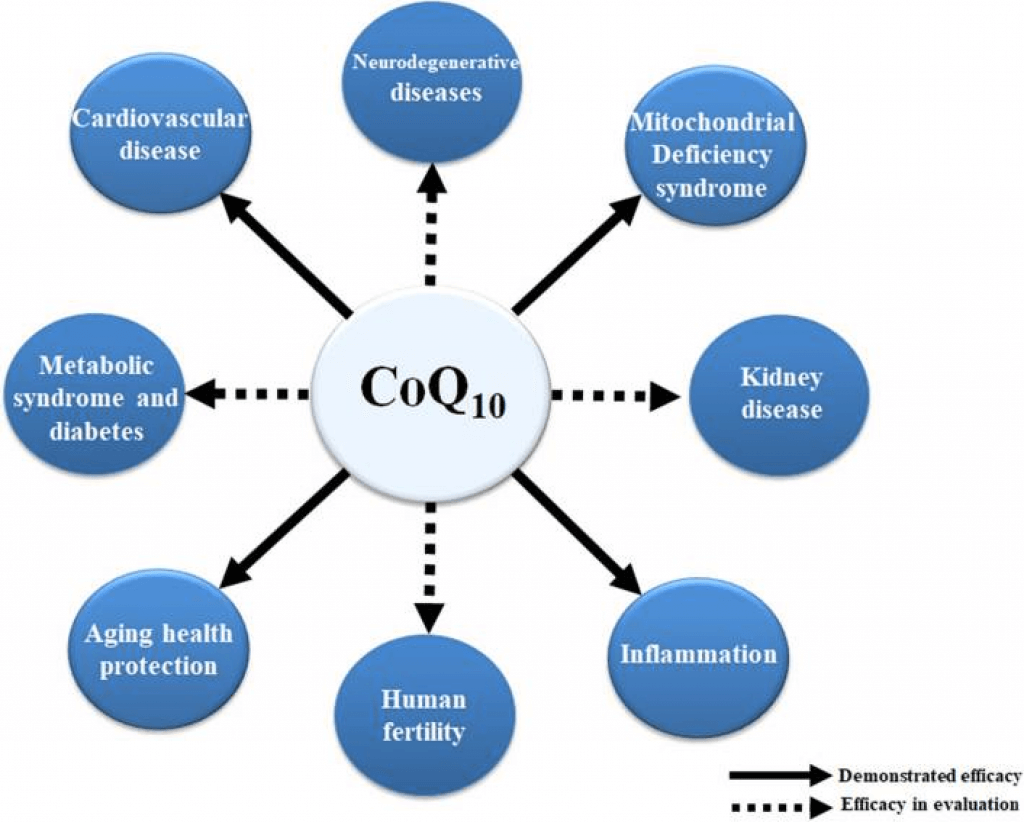 Antioxidants, such as CoQ10, can neutralize free radicals and may reduce or even help prevent some of the damage they cause. CoQ10 improves energy, augments the immune system, and acts as an antioxidant. The potential use of coenzyme Q10 supplements alone or in combination with other drug therapies and nutritional supplements may help prevent or treat some of the following conditions: cardiovascular diseases, high blood pressure, cancer, periodontal diseases, mitochondrial disorders, radiation injury, obesity, diabetes, Parkinson’s disease, acquired immune deficiency syndrome (AIDS), gastric ulcers, allergy, migraine headaches, kidney failure, muscular dystrophy, and aging. CoQ10 plays a significant role in boosting the immune system and physical performance, as tissues and cells involved with immune function are highly energy-dependent and therefore require an adequate supply of CoQ10 for optimal function.

Coenzyme Q-10 as an Antioxidant

Reactive Oxygen Species (ROS) formed in the cell are able to damage lipids, proteins and DNA. The mitochondrion is the compartment considered to be the major source of ROS production in the cell and, therefore, this organelle is highly susceptible to suffer oxidative damage. To avoid this harmful effect, the mitochondrion possesses antioxidant compounds and systems, being CoQ one of them. CoQ is one of the most powerful endogenously synthesized membrane antioxidants, being present in all membranes. Its antioxidant function efficiently protects lipids from harmful oxidative damage, but also DNA and proteins. (5)

CoQ is effective in the prevention of DNA damage as shown by the decreased strand breaks in DNA and other oxidative DNA damage markers in mitochondria, which is important for mitochondrial DNA since its oxidative damage is approximately 10-fold higher than nuclear DNA and is not easily reparable. These data are supported by Tomasetti and colleagues who showed that CoQ10 supplementation inhibits DNA strand break formation and oxidative damage and enhances DNA repair enzyme activities in lymphocytes. Both the antioxidant activity of CoQ10 and the role that CoQ10 may play in the redox mechanism implicated in the transactivation of DNA repair enzymes could explain the capability of CoQ10 to protect DNA from oxidative damage. (5)

It is an effective antioxidant both on its own and in fusion with vitamin E and is fundamental in powering the body’s energy production ATP cycle. CoQ10 is found throughout the body in cell membranes, especially in the mitochondrial membranes, and is chiefly abundant in the heart, lungs, liver, kidneys, spleen, pancreas, and adrenal glands. The whole body content of CoQ10 is only about 500-1500 mg and decreases with age. Coenzyme Q10 is one of the most significant lipid antioxidants that prevents the generation of free radicals and modifications of proteins, lipids, and DNA. (1) 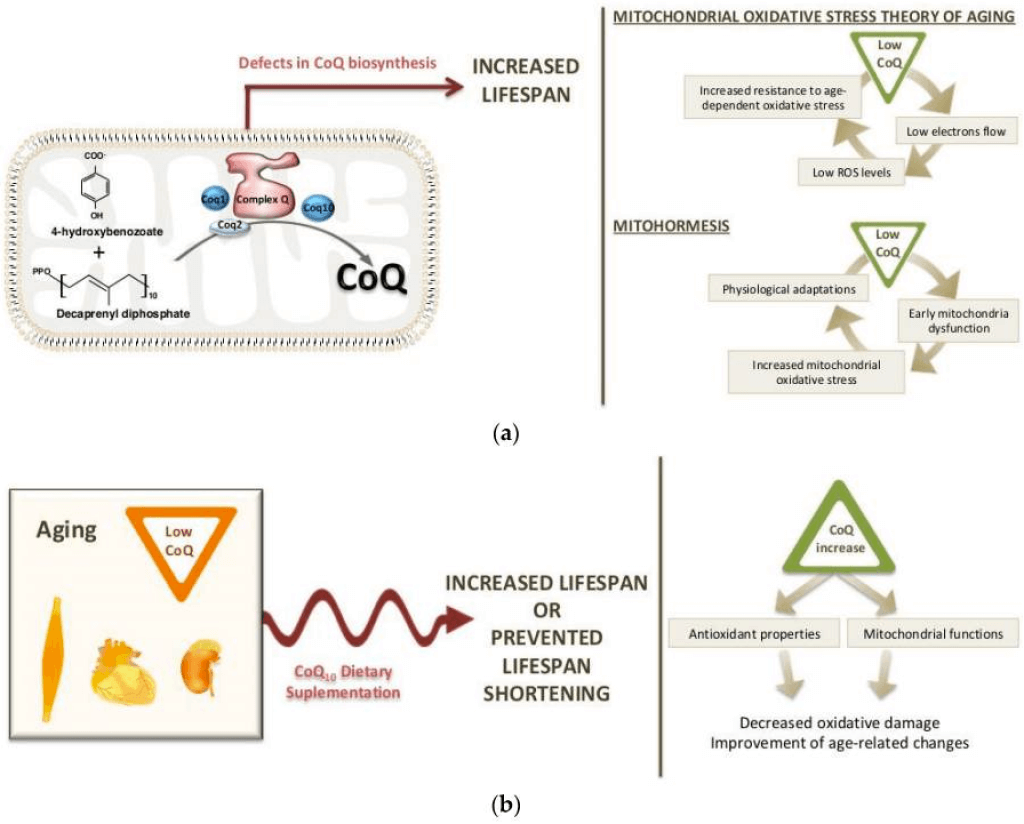 Only one study has investigated the neurocognitive effects of CoQ10 in individuals free from neurodegenerative disease. In this trial, the effects of an acute dosage of 100 mg of CoQ10 on quantified EEG (QEEG) was examined in 40–55-year-old hypertensive subjectS. In this study, the profile of resting QEEG following CoQ10 administration was similar to that of a cognitive enhancer. It is also interesting to note that in a recent case study by Okeahialam a Nigerian woman with dyslipidemia who had been experiencing statin-induced memory dysfunction, reported resolution of her memory complaints following 4 months of daily CoQ10 (100 mg/day) supplementation. (3)

There are several mechanisms via which CoQ10 may influence cognition. Experimental studies in animal models suggest that CoQ10 may protect against neuronal damage produced by ischemia, atherosclerosis and toxic injury. Oral administration of CoQ10 increases brain mitochondrial concentrations in animal studies and reduces markers of oxidative damage in the cerebral cortex and hippocampus of rats with induced oxidative injuries, whilst also improving cognition. These findings indicate CoQ10 can exert neuroprotective effects. Cognitive effects of CoQ10 may also be mediated by the cardiovascular system. The association between cardiovascular health and cognitive function has been well established. Substances with the capability to modify endothelial function, such as CoQ10, may, in turn, be associated with increased cerebral blood flow, enhancing the delivery of oxygen and glucose to the brain. (3)

In conclusion, there is a good evidence implicating oxidative stress, mitochondrial and microvascular dysfunction in the pathogenesis of age-related cognitive impairment. These pathophysiological processes are all potentially able to be counteracted by CoQ10 therapy thus providing the impetus for the current study. (3)

Increased oxidative stress is implicated in the pathogenesis of Alzheimer’s disease (AD). A large body of evidence suggests that mitochondrial dysfunction and increased reactive oxygen species occur prior to amyloid-β (Aβ) deposition. Coenzyme Q10 (CoQ10), a component of the mitochondrial electron transport chain, is well characterized as a neuroprotective antioxidant in animal models and human trials of Huntington’s disease and Parkinson’s disease, and reduces plaque burden in AβPP/PS1 mice. (6)

Supplementation with CoQ10 may be beneficial in the aging population, at risk for Alzheimer’s disease. CoQ10 supplements are safe for human consumption in high doses and has already shown potential as a neuroprotectant. CoQ10 treatment of human neuroblastoma cells protect against Aβ toxicity, inhibits formation and extension of Aβ fibrils and destabilizes pre-formed Aβ fibrils. Further, CoQ10 supplementation in AD transgenic mice attenuates brain atrophy, decreases production of Aβ and protects against both plaque formation and memory loss. (4)

Over the past decade, interest in the roles of nutritional supplements in neurodegenerative disease has intensified. One of these supplements, coenzyme Q10 (CoQ10), is an essential cofactor involved in mitochondrial oxidative phosphorylation as well as a potent antioxidant. Strong evidence has now emerged supporting the role of oxidative stress and defective energy metabolism in the pathogenesis of many neurodegenerative disorders, such as Parkinson’s disease (PD), Huntington’s disease (HD), and Alzheimer disease (AD). (8)

There is, therefore, a robust scientific rationale for testing this agent as a potential neuroprotective therapy. Levels of CoQ10 in the brain and other tissues in humans and animals have been shown to decline with age, further suggesting a potential therapeutic role in age-related neurodegenerative disorders. Moreover, the substantia nigra, in which cell death results in the disabling motor symptoms of PD, has the lowest CoQ10 content within the brain. (8)

In one study CoQ10, given orally in drinking solution, was effective in blocking the progression of neurodegeneration when administered therapeutically (post-toxin injection), at a much lower concentration than other previously tested oil soluble formulations and well within the acceptable daily intake of 12 mg/kg/day. Such unprecedented neuroprotection has never been reported before. These results are very encouraging and suggest that CoQ10, should be further tested and developed as a therapy for halting the progression of Parkinson’s Disease (PD). (7)

It has been proposed that coenzyme Q10 is a conditionally essential nutrient, required only by some individuals or under certain circumstances. It is likely that PD is a condition where the requirements of Q10 increase, making individuals, or a subset of individuals, dependent on this nutrient. (8)

Primary dietary sources of CoQ10 include oily fish (such as salmon and tuna), organ meats (such as liver), and whole grains. Most individuals obtain sufficient amounts of CoQ10 through a balanced diet, but supplementation may be useful for individuals with particular health conditions. (1)

CoQ10 is fat-soluble, so it is better absorbed when taken with a meal that contains oil or fat. The clinical effect is not immediate and may take up to eight weeks. Side effects of CoQ10 may include diarrhea and rash; safety of Co q10 in pregnant or nursing women, or children has not been established. It is concluded that Coenzyme Q10 (ubiquinone/ubiquinol) is a fat-soluble quinone with a structure similar to that of vitamin K. (1)

CoQ10 is available as a supplement in several forms, including soft gel capsules, oral spray, hard shell capsules, and tablets. A typical CoQ10 dosage is 30 to 90 mg per day, taken in divided doses, but the recommended amount can be as high as 200 mg per day. (1)

In all of the studies mentioned, most notably one study of up to 3,000 mg/day no serious adverse effects have been reported, even at the highest doses. Overall, therefore, the most common side effect is mild gastrointestinal discomfort from CoQ10, and this occurs in less than 1%. Isolated case studies regarding CoQ10 have reported decreased anticoagulant effect of warfarin, but this effect has not been confirmed in prospective studies. A recent trial of CoQ10 200 mg daily in pregnant women at risk for pre-eclampsia reported no adverse effects. Currently, no absolute contraindications to the use of CoQ10 exist. (9)

(3) CoQ10 and Cognition a Review and Study Protocol for a 90-Day Randomized Controlled Trial Investigating the Cognitive Effects of Ubiquinol in the Healthy Elderly. PUBMED https://www.ncbi.nlm.nih.gov/pmc/articles/PMC6549544/