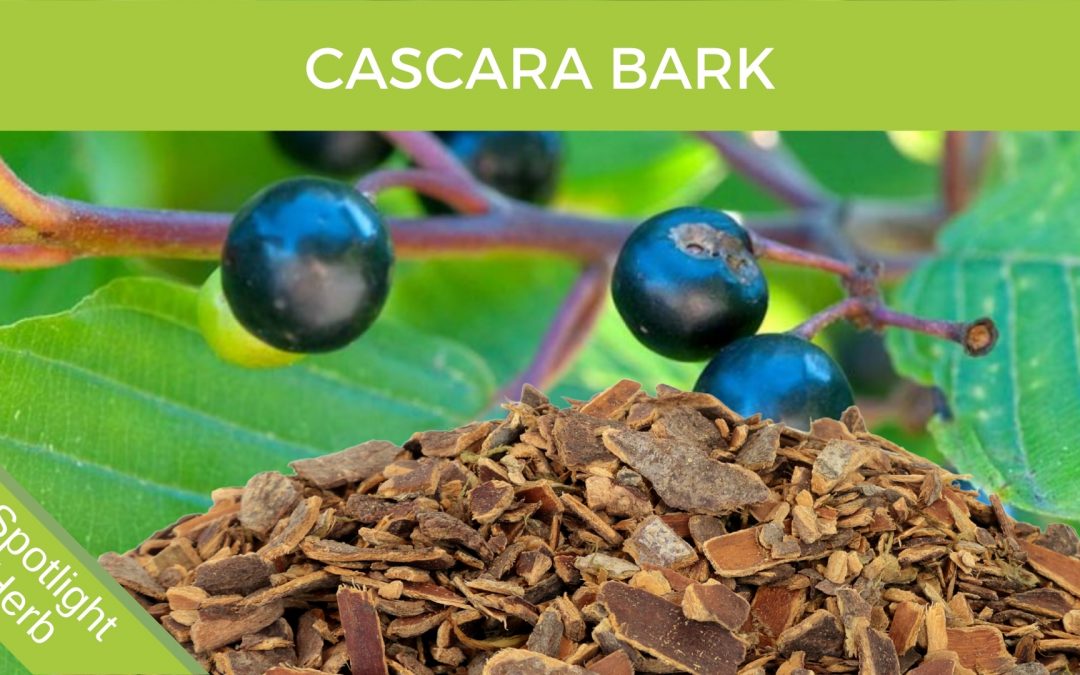 Traditional Use
Cascara was a folk medicine used by native American people and immigrants as a natural laxative. The plant itself was not definitely identified by scientists until 1805, and the bark was not commonly used as medicine 1877. The berries of the European counterpart (European buckthorn, Rhamnus frangula), on the other hand, were described in the London Pharmacopoeia of 1650.

The dried bark of cascara has been used for centuries as a laxative, first by Native Americans in the Pacific Northwest, and then by European/U.S. colonizers. The chemicals primarily responsible for the laxative action are the hydroxyanthracene glycosides (particularlycascarosides A, B, C and D), and emodin. These act as stimulant laxatives, with the hydroanthracene glycosides stimulating peristalsis, and emodin exciting smooth muscle cells in the large intestine. (1)

Pharmacology
The bark contains anthranoids, mainly of the aloe-emodin type, in addition to those of the chrysophanol and physcion type.

1,8-dihydroxy-anthracene derivatives have a laxative effect.  This effect is primarily due to the influence of the herb on the motility of the colon, inhibiting stationary and stimulating propulsive contractions.  This results in an accelerated intestinal passage and, because of the shortened contact time, a reduction in liquid absorption.  In addition, stimulation of the active chloride secretion increases water and electrolyte content.

Systematic studies pertaining to the kinetics of cascara sagrada bark preparations are not available.  However, it must be concluded that the aglycones contained in the drug are already absorbed in the upper small intestine.  The -glycosides are prodrugs that are neither absorbed nor cleaved in the upper gastrointestinal tract.  They are degraded in the colon by bacterial enzymes to anthrones.  The anthrones are the laxative metabolites.

Drug preparations [i.e., herbal stimulant laxatives] have higher general toxicity than the pure glycosides, presumably due to the content of aglycones.  Experiments pertaining to the genotoxicity of cascara sagrada and its preparations are not available.  Some positive data were obtained for aloe-emodin, emodin, physcion, and chrysophanol.  No data are available for carcinogenicity.

The fresh bark contains free anthrone and must be stored for one year or artificially aged by heat and aeration.  The use of illegally processed cascara sagrada bark, e.g., fresh bark, will cause severe vomiting, possibly spasms.

Medicinal uses supported by clinical data
Short-term treatment of occasional constipation (8, 17, 20, 21). The laxative effects of Cortex Rhamni Purshianae are due primarily to the anthraquinone glycosides and cascarosides A–D (7, 22). After oral administration of Cortex Rhamni Purshianae, the hydroxyanthracene glycosides are not absorbed in the upper intestine, but are hydrolysed in the colon by intestinal bacteria to form the pharmacologically active metabolites. These metabolites are partially absorbed in the colon and act as a stimulant and irritant to the gastrointestinal tract, as does senna (21, 23–25). The mechanism of action, similar to that of senna, is twofold. Firstly, there is stimulation of colonic motility, resulting in increased propulsion and accelerated transit of faeces through the colon (which reduces fluid absorption from the faecal mass). Secondly, there is an increase in paracellular permeability across the colonic mucosa, probably due to inhibition of sodium/potassium-transporting adenosine triphosphatase or inhibition of chloride channels (23, 26). The increased permeability results in increased water content in the colon (21, 26). The laxative effect of Cortex Rhamni Purshianae is not generally observed until 6–8 hours after oral administration. Hydroxyanthracene glycosides are excreted predominantly in the faeces but are also excreted to some extent in urine, producing an orange colour; anthrones and anthranols will also pass into breast milk (23).

The laxative effect of emodin is attributable to increased aquaporin 3 expression in the colon of mice and HT-29 cells.

Emodin (1,3,8-trihydroxy-6-methylanthraquinone) is a stimulant laxative and used to treat constipation. Aquaporin 3 (AQP3) plays an important role in regulating water transfer in the colon. In the study, we investigated whether the laxative effect of emodin is associated with the regulation of AQP3 in the colon. Our results showed that treatment with emodin increased the fecal water content in the colon of mice and evaluation index of defecation in a dose-dependent manner. More interestingly, emodin significantly increased the AQP3 protein and mRNA expression both in the colon of mice and in human intestinal epithelial cells (HT-29). Mechanistically, emodin obviously up-regulated the cyclic adenosine monophosphate (cAMP)-dependent protein kinase A catalytic subunits α (PKA C-α) and phosphorylated cAMP response element-binding protein (p-CREB Ser133) expression in HT-29 cells. These results suggest that the laxative effect of emodin is associated with the increased expression of AQP3 by up-regulating PKA/p-CREB signal pathway. (1)

Toxicity and overdose
As with other anthraquinone laxatives, the major symptoms of overdose are intestinal pain and severe diarrhoea with consequent loss of fluid and electrolytes (27). Treatment of overdoses should be supported with generous amounts of fluid. Electrolyte levels should be monitored, particularly those of potassium. This is especially important in children and the elderly (27).

Contraindications
Cortex Rhamni Purshianae should not be administered to patients with intestinal obstruction and stenosis, atony, inflammatory diseases of the colon (such as ulcerative colitis, irritable bowel syndrome, Crohn disease), appendicitis, severe dehydration with water and electrolyte depletion, or chronic constipation (20, 24, 27). As with other stimulant laxatives, Cortex Rhamni Purshianae is contraindicated in patients with cramps, colic, haemorrhoids, nephritis or any symptoms of undiagnosed abdominal disorders such as pain, nausea or vomiting (27). Owing to the pronounced action on the large intestine and insufficient toxicological investigations, Cortex Rhamni Purshianae and other anthranoid laxatives should not be administered to pregnant women (28, 29).

As anthranoid metabolites may appear in breast milk, Cortex Rhamni Purshianae should not be used during lactation, since there are insufficient data to assess potential pharmacological effects in the breastfed infant (29). Use of Rhamni Purshianae in children under 10 years is contraindicated (20).

Warnings
Chronic use may result in aggravation of constipation with laxative dependence, a need for increased dosages and disturbances of water and electrolyte balance (e.g. hypokalaemia). Chronic use may also lead to colonic dysfunction (atonicity) and melanotic pigmentation of the colonic mucosa (pseudomelanosis coli), which is harmless. Laxative abuse resulting in diarrhoea and consequent fluid and electrolyte losses (mainly of potassium) may cause albuminuria, haematuria, and cardiac and neuromuscular dysfunction. Neuromuscular dysfunction may arise particularly in the case of concomitant use of cardiotonic glycosides (e.g. digoxin, digitalis or strophanthin), diuretics, corticosteroids or liquorice root (27).

Long-time use/abuse:
Disturbances of electrolyte balance, especially potassium deficiency, albuminuria, and hematuria.  Pigment implantation into the intestinal mucosa ( pseudomelanosis coli ) is harmless and usually reverses upon discontinuation of the drug.  Potassium deficiency can lead to disorders of heart function and muscular weakness, especially with concurrent use of heart glycosides, diuretics, or corticosteroids.

Dosage
Cut bark, powder or dry extracts for teas, decoction, cold maceration or elixir.  Liquid or solid forms of medication exclusively for oral use. The individually correct dosage is the smallest dosage necessary to maintain a soft stool.

28. Lewis JH, Weingold AB. The use of gastrointestinal drugs during pregnancy and lactation. American Journal of Gastroenterology, 1985, 80:912–923.