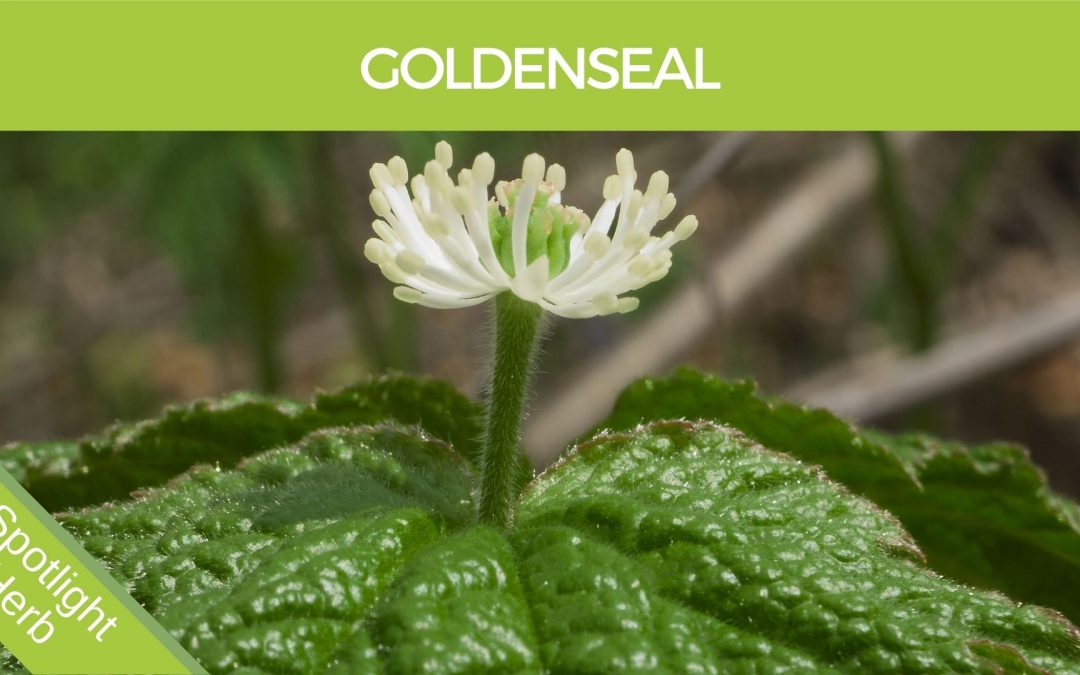 Goldenseal is one of my all-time favorites and what an amazing plant it is. The taste is extremely bitter and it stains everything it touches a bright yellow gold but if there is one herb I would want to have in my dispensary above all others it would probably be Goldenseal. It is quite literally liquid gold.

Let’s find out why!

Description
Goldenseal (Hydrastis Canadensis), also called orangeroot or yellow puccoon, is a perennial herb in the buttercup family Ranunculaceae, native to southeastern Canada and the eastern United States. It may be distinguished by its thick, yellow knotted rootstock. The stem is purplish and hairy above ground and yellow below ground where it connects to the yellow rhizome. The plant bears two palmate, hairy leaves with 5–7 double-toothed lobes and single, small, inconspicuous flowers with greenish white stamens in the late spring. It bears a single berry like a large raspberry with 10–30 seeds in the summer. (8)

In herbal medicine, Goldenseal is often used as a multi-purpose remedy and is thought to possess many different medicinal properties. In addition to being used as a topical antimicrobial, it is also taken internally as a digestion aid. (9)

Goldenseal may be purchased in salve, tablet, tincture form, or as a bulk powder. Goldenseal is often used to boost the medicinal effects of other herbs with which it is blended or formulated. (9)

Traditional use
The North American plant Golden Seal produces a drug which is considered of great value in modern medicine. The generic name of the plant, Hydrastis, is derived from two Greek words, signifying water and to accomplish, probably given it from its effect on the mucous membrane. (7)

In 1905 the United States Department of Agriculture called attention to the increasing demand for Golden Seal for medicinal purposes in a Bulletin (No. 51). There it is stated that the early settlers learned of the virtues of Golden Seal from the American Indians, who used the root as a medicine and its yellow juice as a stain for their faces and a dye for their clothing. (7)

It is known as a valuable remedy in disorders of the digestive system and has a special action on the mucous membrane, making it of value as a local remedy in various forms of catarrh, chronic inflammation of the colon and rectum and especially famous for reducing hemorrhoids. Goldenseal has been credited with the following herbal properties: bitter, hepatic, alterative/restorative, anticatarrhal, anti-inflammatory, antimicrobial, laxative, emmenagogue, and oxytocin. (7)

Hydrastis owes its virtues almost entirely to Hydrastine, the alkaloid Berberine, apart from some effect as a bitter being practically inert. The United States Pharmacopoeia requires Hydrastis to yield not less than 2.5 percent of Hydrastine. (7)

Gut Membrane Health
Berberine, the main active contistuent in Golden seal downregulates abnormal activation of the TNF-α-NF-κB-MLCK pathway by upregulating expression of A20 in a mouse model of IBS-D, thereby protecting intestinal epithelial tight junctions and repairing the damage IBS-D causes to the intestinal epithelial barrier. (11)

Data from another study suggests that berberine alleviates colitis principally by improving intestinal barrier function and promoting anti-inflammatory and antioxidative stress responses. In turn these effects inhibit macrophage infiltration into the colon and thus may be central to the anti-colitis activity of berberine. (12)

Microbial Infections
Results of one study showed that Golden Seal extracts possess a mixture of constituents that act against drug-resistant bacterial infections such as Staphylococcus aureus. These findings lend support for the traditional application of goldenseal in the prevention of infection. (1)

Extracts of goldenseal have been shown to be very active in inhibiting Helicobacter pylori which are the major cause of stomach and peptic ulcers. (3) (4) Multiple bacteria and fungi, along with selected protozoa and chlamydia are susceptible to berberine in vitro (10)

Liver support
Goldenseal is a powerful bitter herb and as such can be used as a bitter liver stimulant.  Recent studies show Goldenseal is a natural LDL-lowering agent with multiple bioactive components. (5)

Anti-inflammatory
The major active constituent in Goldenseal berberine inhibits oxidative stress and inflammation in a variety of tissues including liver, adipose tissue, kidney, and pancreas. (6)

Conclusion
Goldenseal is a very important herb in the control of gastrointestinal dysbiosis (gut health imbalance) which makes it a powerful addition to your herbal health program whether it be a herbal detox diet or weight loss diet. Looking after the balance of bacteria, yeast and controlling intestinal pathogens and parasites is a major part of achieving ultimate health and energy.  This is why we have included Golden Seal in Brett Elliott’s Ultimate Herbal Detox program.

It can be found in these products:

I hope you have found this article informative.

(3) In vitro susceptibility of Helicobacter pylori to isoquinoline alkaloids from Sanguinaria canadensis and Hydrastiscanadensis. PubMed http://www.ncbi.nlm.nih.gov/pubmed/12672149

(4) Investigations into the antibacterial activities of phytotherapeutics against Helicobacter pylori and Campylobacter jejuni. PubMed http://www.ncbi.nlm.nih.gov/pubmed/?term=golden+seal+ulcer

(6) Antioxidant and anti-inflammatory activities of berberine in the treatment of diabetes mellitus. PubMed http://www.ncbi.nlm.nih.gov/pubmed/24669227

(13) Remodeling of Tight Junctions and Enhancement of Barrier Integrity of the CACO-2 Intestinal Epithelial Cell Layer by Micronutrients. PUBMED https://www.ncbi.nlm.nih.gov/pmc/articles/PMC4520484/