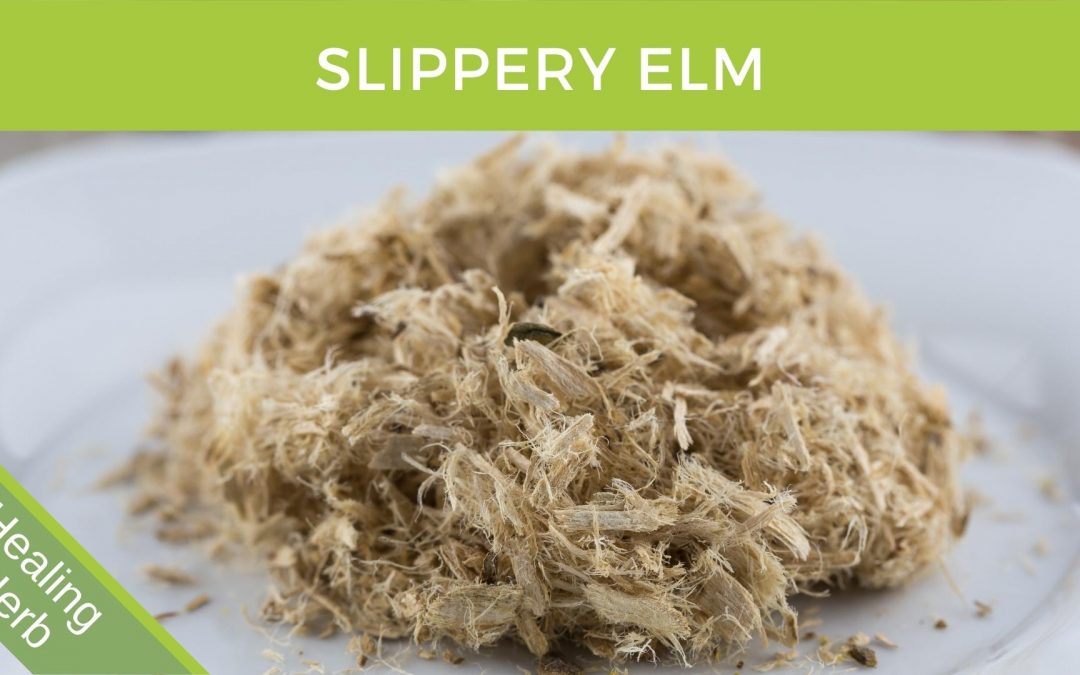 Its botanical name is Ulmus fulva, or Ulmus rubra.

Slippery Elm can be found in the following Ultimate Herbal Health products.

Slippery elm is a tree native to North America, which can grow to a height of over 50 feet (15m). The outer bark is red, brown or orange. It is the inner bark of the tree that is used medicinally. The bark has a faint fragrance somewhat like very mild allspice.

Historically Slippery elm bark was appreciated for its demulcent properties, which were useful in the treatment of a wide range of inflammatory conditions including digestive, respiratory and urinary disorders. It has also been widely used externally for skin diseases and wound healing. On boils, Slippery elm was applied as an effective treatment due to its drawing action.

Nineteenth-century doctors and herbalists recommended Slippery elm tea in the management of lung diseases such as pneumonia, consumption (tuberculosis) and pleurisy. A large dose of the herbal tea was reputed to expel tapeworms literally causing the parasite to slide out of the digestive tract. Skin ulcers, boils, carbuncles, abscesses, inflammations, burns, chilblains, herpes, syphilis eruptions, and even leprosy were soothed with a wet, mucilaginous poultice of Slippery elm bark.

Slippery elm has also been used orally to soothe irritation or ulceration of the stomach and intestines.

Slippery elm barks mucilage is a type of soluble fiber. When combined with water it forms a thick and slippery gel. This demulcent, healing, and soothing gel-like mucilage have many health benefits including:

Mucous membrane soother
Slippery elm mucilage works beneficially on all mucous membranes of the body via a reflex-demulcency action. Reflex demulcency is thought to exist due to messaging via the nervous system.

Here’s how reflex demulcency is thought to work. When the developing body is an embryo there is a stage during which all the mucous membrane tracts of the body are not yet fully formed. We are talking about the Gastrointestinal tract (GIT), the urinary tract (UT) and the respiratory tract (RT). They all start out as one long bendy tube and in the early weeks of gestation, they continue to develop, becoming defined and separated…lungs and bronchial tubes, stomach, and intestines, kidneys, ureters, bladder, and urethra. After these membrane tracts are fully separated and defined there remains and grows an extensive network of nerves that fire messages to the brain. It is this connection between the tissues of the GIT, UT, and RT that provide the effects of reflex demulcency in tandem with direct exposure via beneficial substances in blood circulation.

This means that if a demulcent substance such as Slippery elm is passed through the GIT, then the respiratory tract will also be beneficially affected, thereby soothing a cough. Likewise, the urinary system can experience an anti-inflammatory effect relayed via the GIT and substances passed through the bloodstream.

The metabolites of soluble fiber decrease blood fats via the liver.

Other SCFA’s, propionic acid and acetic acid, are used for the liver and muscles and help to lower cholesterol.

Prebiotic
The soluble fiber of Slippery elm acts as a prebiotic which feeds probiotics, the beneficial bacteria of the intestines. Through a natural fermentation process, the soluble fiber is broken down, nourishing and encouraging the proliferation of these necessary probiotic bacteria. In turn, these bacteria aid digestion and are vital to the immune system. They too play an important role in the production of SCFA’s, overwhelm pathogenic (disease-creating) microorganisms and produce chemicals necessary for the immune system to function correctly.

Slippery elm, psyllium, guar gum, kiwifruit and other herbs in Brett Elliott’s Ultimate Herbal Detox and Slim programs provide bountiful amounts of soluble fiber. This is one of the reasons why people report back to us that they are less hungry and have fewer cravings for the first time in years. It is also a contributing reason why immune system function is improved with better digestive function, better skin and a better sense of wellbeing.

The 40 ingredients work together in your body to support, nourish and help repair or maintain digestive function and greater health.

Along with psyllium, Slippery elm helps to give a sensation of fullness when ingested. It is used in herbal detox programs to help soothe the stomach and intestines as well as provide a healing calming and rejuvenating effect on the entire body.

Slippery elm makes the perfect complement to a total body cleanse or inner body detox program as it encourages membranes to heal and may help with the reduction and eventual healing of colitis, hemorrhoids, ulcerative colitis, diverticulitis, Chrons Disease, celiac disease, and stomach or peptic ulcers.

Slippery elm bark is a gentle herb, well tolerated by almost anyone, and it provides a truly healing effect on many body tissues.

Products
Slippery Elm can be found in the following Ultimate Herbal Health products.