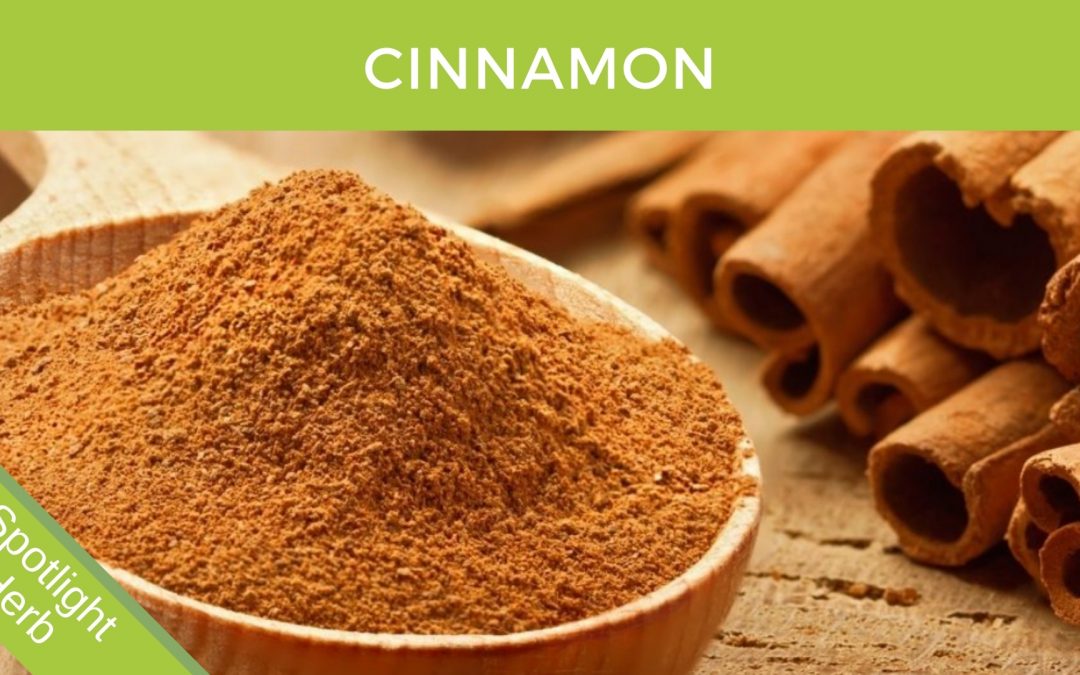 You’re probably most familiar with Cinnamon as a spice used around the kitchen in baking, desserts and sprinkled on your hot chocolate. It has a delicious aroma, and a woody, sweet flavour. I sprinkle it on my porridge for breakfast in place of sugar. However, this common spice is actually a powerful herbal medicine with a large amount of scientific research supporting its use.

Cinnamon (Cinnamomum zeylanicum, and Cinnamon cassia), the eternal tree of tropical medicine, belongs to the Lauraceae family. Cinnamon is one of the most important spices used daily by people all over the world. Cinnamon is mainly used in the aroma and essence industries due to its fragrance, which can be incorporated into different varieties of foodstuffs, perfumes, and medicinal products. (1)

There are mainly four types of cinnamon:

Cinnamomum zeylanicum or ‘True Cinnamon’ is the one most commonly used as a spice and herbal medicine.

The use of cinnamon can be dated back to almost 2800 BC where it was initially referred to as “Kwai” in the Chinese language. It was a component of the anointing oil used by Moses for the purpose of anointment (to make a person holy) as mentioned in the Bible. The Romans used it for its medicinal properties for ailments of the digestive and respiratory tract. It was also used in Roman funerals in order to fend off the odor of dead bodies. It was used in Egypt for embalming of mummies as well as for its fragrance and flavoring properties. (2)

In addition to being used as a spice and flavoring agent, cinnamon is also added to flavor chewing gums due to its mouth refreshing effects and the ability to remove bad breath. Cinnamon can also improve the health of the colon, thereby reducing the risk of colon cancer. (1)

Cinnamon is exported as cinnamon quills from four main countries: Indonesia, China, Vietnam, and Sri Lanka. The quills are made by peeling the bark and then rolling it into pipes. (2)

Cinnamon is a coagulant and prevents bleeding. Cinnamon also increases the blood circulation in the uterus and advances tissue regeneration. This plant plays a vital role as a spice, but its essential oils and other constituents also have important activities, including antimicrobial, antifungal, antioxidant, and antidiabetic. (1)

Cinnamon has been used as an anti-inflammatory, antiemetic, nematicidal, mosquito larvicidal, insecticidal, antimycotic, and anticancer agent. Cinnamon has also been traditionally used as tooth powder and to treat toothaches, dental problems, oral microbiota, and bad breath. (1) 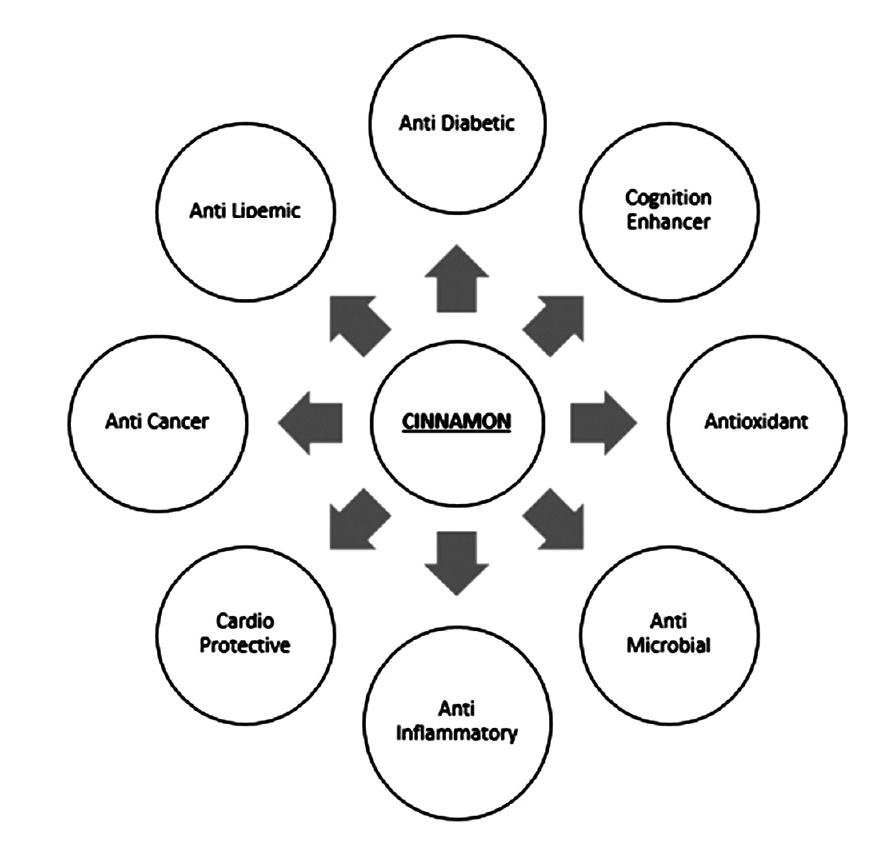 A number of studies have supported many of the traditional medicinal claims for Cinnamon including Anti-Inflammatory, Antidiabetic, Anticancer, and Antioxidant Activity. (1)

A recent study reported the potential effects of two compounds, cinnamic aldehyde and cinnamic acid, isolated from Cinnamon against myocardial ischemia, indicating that cinnamon also has the potential to be used to treat cardiovascular diseases. (1)

Cholesterol
The administration of cinnamon to mice positively affected the lipid profile, whereby the high-density lipoprotein (HDL) cholesterol levels decreased, and plasma triglycerides were reduced. Another study by found a reduction in the total cholesterol, triglycerides, and low-density lipoproteins in rats administered Cinnamomum cassia powder. (1) Cholesterol- and lipid-lowering effects of cinnamon were shown in many studies. In Khan et al study, cinnamon with doses of 1, 3, and 6 g per day caused a reduction in triglyceride (TG), total cholesterol, and LDL-c cholesterol levels in humans. (3)

Blood Pressure
Cinnamaldehyde produces hypotensive effects, which are possible mainly due to peripheral vasodilatation in anesthetized dogs and guinea pigs. The vasodilatation induced by cinnamaldehyde in dogs lasted and remained over the recovery period of the fall in blood pressure to the baseline. (1) A systemic review done of three studies has suggested that cinnamon can cause a significant fall in systolic as well as diastolic BP though the precise mechanism remains to be ascertained. (2) Another study done on 59 subjects, suggests that dietary supplementation with cinnamon can lead to a significant fall in systolic BP. (2)

Blood Sugar
Cinnamaldehyde also averts the progress of hypertension in types 1 and 2 diabetes by abridging vascular contractility, in addition to its insulinotropic effect in insulin deficiency. (1) A meta-analysis by Allen et al. done for 10 randomized controlled trials including 543 patients has established that cinnamon, when taken in a dose of 120 mg/day to 6 g/day for approximately 4 months leads to a statistical decrease in levels of fasting plasma glucose along with an improvement in the lipid profile. (2)

As you can see above Cinnamon has many health benefits especially when it comes to the heart and blood (cardiovascular) health.

I would suggest that long-term use of cinnamon as a preventative home remedy is a good idea. Use it freely on your fruit, or porridge at breakfast, in your smoothies, and on your coffee.

Another great example of how we can use traditional herbal medicine at home to look after our health.

(3) Cinnamon effects on metabolic syndrome: a review based on its mechanisms. PUBMED https://www.ncbi.nlm.nih.gov/pmc/articles/PMC5220230/