Forskolin is a chemical found in the roots of the plant Plectranthus barbatus (Coleus forskohlii). This plant has been used since ancient times to treat heart disorders such as high blood pressure and chest pain (angina), as well as respiratory disorders such as asthma. (2) 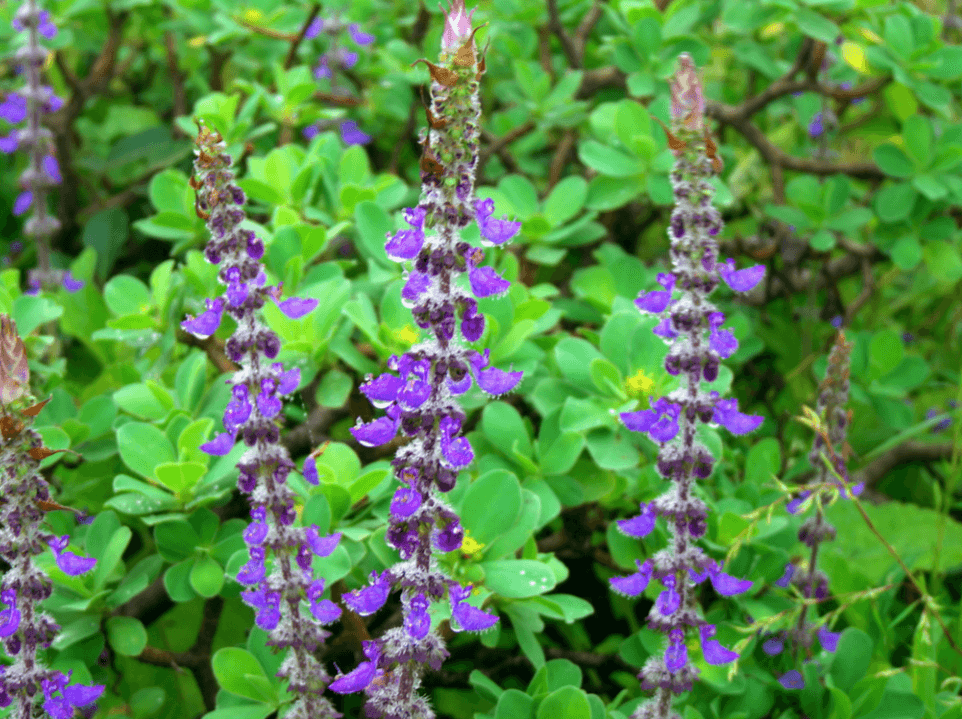 Coleus is an ancient root drug mentioned in Ayurvedic Materia Medica, under the Sanskrit name ‘Makandi’. In the recent monographs of the Indian Council of Medical Research, it is described by the name Gandir, with a Gujarati name of ‘Garamar’. It is commonly known as Garmar in the Saurashtra region of Gujrat, and is extensively used as a pickle in almost every home during its season, around the months of March to May of each year.

The species is being cultivated in Gujarat, Maharashtra, and Karnataka. The traditional uses of the plant are also reported. The root tubers are used traditionally as blood purifiers, hypotensives, diuretics, and so on. (4)

In 1974, researchers first isolated the diterpene, Forskolin, having blood pressure lowering and antispasmodic effects, from the roots, making it the only plant source thus far known having this substance.

The therapeutic effects of this alkaloid ‘forskolin’ are well-documented as being a hypotensive, antispasmodic, positive inotrophic, vasodilator, smooth muscle relaxant, anti-inflammatory, with anti-platelet aggregation, a bronchodilator, anti-glaucoma agent, anti-metastatic, and so on, due to its unique ability to activate the enzyme, Adenylate cyclase. (4)

Coleus forskohlii contains Forskolin, 1-deoxyforskolin, and 1,9-dideoxyforskolin which are structurally related bioactive diterpenoids. Forskolin is exclusively known as a fat burner, commonly used for the treatment of obesity, hypothyroidism, allergies, asthma, eczema, psoriasis, and glaucoma. Coleus forskohlii is one of the commercially important herbal ingredients for weight-loss dietary supplements in the global market. Its favorable effects on body fat management have been well established. (3)

Forskolin (7β-Acetoxy-8, 13-epoxy- 1α,6β, 9 α-trihydroxy-labd-14-ene-11-one) is a labdane diterpene that was first isolated from the plant in 1974. Forskolin is extracted from the tuberous roots of the plant and thus far, Coleus forskohlii is the only species known to contain significant amounts of the bioactive component. (1)

Forskolin is the extract from the tubers of the Coleus forskohlii has been proven to have a blood pressure lowering and antispasmodic effects. It was first described as an activator of adenylate cyclase in rabbit heart membranes.

The unique ability of forskolin to activate the enzyme Adenylate cyclase in the absence of a functional guanine nucleotide regulatory protein, strongly suggested that forskolin was a unique agent, capable of activating the catalytic protein directly. Also, in the textbook of modern science, it is mentioned that adenylate cyclase can be stimulated directly by the administration of forskolin, which bypasses both the beta receptor and G protein. (4)

It is suggested that the lowering of blood pressure is not mediated by the central effects of forskolin, but is rather due to the direct peripheral vasodilatory actions, through its smooth muscle relaxation property. Activation of adenylate cyclase further increases the amount of cyclic adenosine monophosphate (cAMP) in the cells. cAMP is the most important cyto-regulatory compound. This activation of Adenylate cyclase in the smooth muscles of the blood vessels by forskolin, resulting in an increase of cyclic AMP levels, may be a mediating factor for the relaxation of smooth muscles, which further results in vasodilatation, hence leading to a decrease in blood pressure. (4)

It also had a spectrum of other actions like positive ionotropic, anti-glaucoma, anti-inflammatory, antiplatelet aggregation, anti-metastatic, bronchospasmolytic; bodyweight reduction by increasing lean body mass, and so on, all of which attributed to its ability to increase the amount of cAMP in the cells. (4)

It has been documented that forskolin increases the rate of lipolysis via cyclic adenosine monophosphate (cAMP) accumulation by mechanisms independent of hormonal stimulation both in vitro and in animal models. Furthermore, forskolin also directly activates hormone-sensitive lipase by phosphorylation of protein kinase A resulting in further lipolysis and release of free fatty acids (1)

One study found that other side benefits of supplementation with may contribute to the weight loss effect experienced by users of Coleus are a decrease in tension-anxiety over time. This decrease could be associated with the possible effects of supplementation on body weight, which is an issue that often leads to tension-anxiety. Trends were observed in fatigue levels. Subjects taking the supplement appeared to experience less fatigue over the course of the study. (5)

There are not many herbal medicines that have such clear chemistry as Coleus, especially when it comes to weight loss. The benefits to heart function and cardiovascular health make Coleus a great addition to your weight loss or metabolism balancing program.

I have included Coleus in the following product formulations: