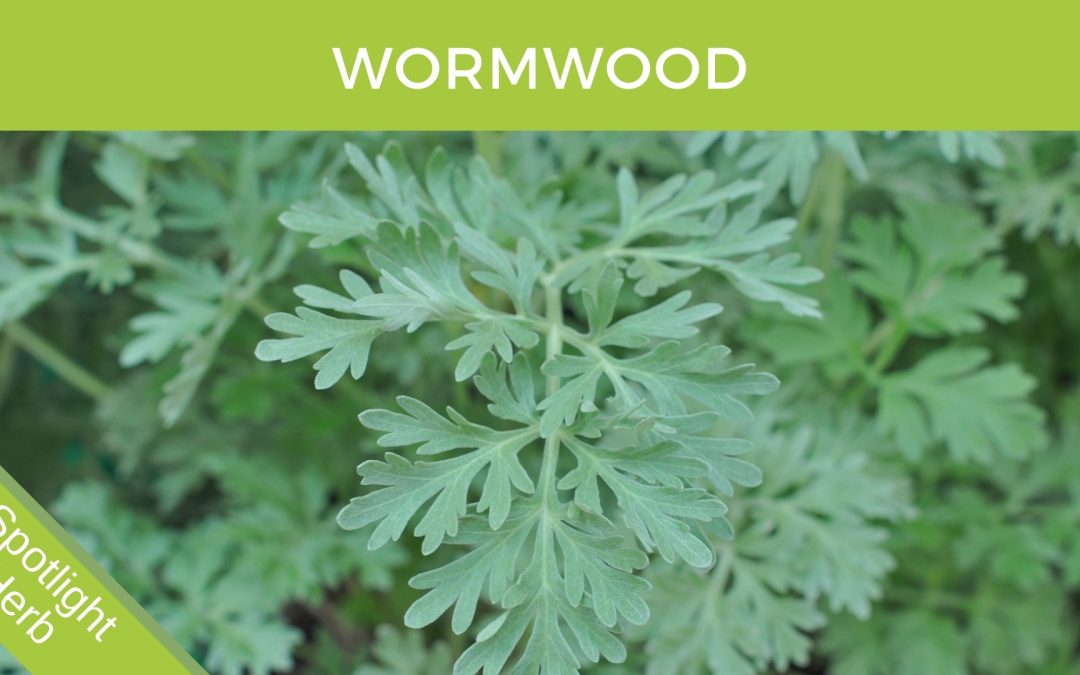 Wormwood consists of the upper shoots and leaves, or a mixture of these plant parts called Aerial parts in the commercial industry. The herb is best harvested during the flowering season and can be used as fresh or dried material. Artemisia absinthium is a species native to temperate regions of Eurasia (3) and Northern Africa and widely naturalized in Canada and the northern United States. (4) It is grown as an ornamental plant and is used as an ingredient in the spirit absinthe as well as some other alcoholic drinks.

Medicinal use of wormwood dates back to Roman times, but in the last century this tradition was declining apparently due to fears of absinthism, a syndrome allegedly caused by the wormwood-ﬂavoured spirit absinthe and more specifically as a result of thujone, a monoterpene ketone often present in the essential oil of wormwood. Artemisia absinthium is traditionally used medicinally in Europe and is believed to stimulate the appetite and relieve indigestion. (5)

It is long known that the bitter constituents of wormwood stimulate the gustatory nerves in the mouth and increase the secretion of gastric juice and bile, thereby promoting appetite and digestion (13)

The herb contains at least 0.3% volatile oil and has a bitter value of not less than 15,000.  The volatile oil contains thujone.  Additionally, the herb contains bitter principles of the sesquiterpene lactone types absinthin,  anabsinthin ,  artabsin ,  anabsin , also flavones, ascorbic acid, and tannins.

Anti-Parasitic
Infection of human beings with Toxocara cati or Toxocara canis, (the common roundworm of cats and dogs, respectively) commonly occurs in young children with a history of pica or close contact with domestic animals, for infection arises from ingestion of ova passed in the animals’ feces. Larvae from within these ingested ova pass into the circulation of the human host and migrate to distant organs, causing inflammatory exudates and eosinophilic granulomata. (10) A study showed fecal egg numbers per gram were decreased gradually in cats in trial groups using Artemisia absinthium (11).

Trichinosis is a disease caused by parasitic roundworms (Trichinella spiralis) that can infect and damage body tissues. Trichinosis is usually characterized by two phases: the initial phase (intestinal) of abdominal discomfort, diarrhea, and nausea that begins one to two days after ingestion and the second phase (muscle) of muscle aches, itching, fever, chills, and joint pains that begins about two to eight weeks after ingestion. One study showed that Artemisia absinthium extracts decreased the larval rate of Trichinella spiralis by 66.4% and 59.9% in the tongue, 57.4% and 50.0% in the diaphragm, 47.6% and 43.7% in quadriceps, 60.2% and 46.4% in biceps-triceps muscles of rats, respectively. (12)

The results of one study suggest that Artemisia absinthium extracts are a promising alternative to the commercially available anthelmintics for the treatment of Gastrointestinal roundworms of sheep. (8)

Anti-fungal
One study showed that Artemisia absinthium oil inhibited the growth of the yeast Candida albicans. (9)

Nerve Protection
Most recently in this journal, neuroprotective properties of wormwood were detected in rats, and the plant was suggested to be possibly beneficial in the treatment of strokes. (2)

If threshold concentrations are exceeded, thujone does in fact exhibit neurotoxic properties leading to dose-dependent tonic-clonic seizures in animals, likely caused by GABA type A receptor modulation. Research has since proven that the levels of thujone in absinthe were not sufficient to cause the toxic effect, and the sale of wormwood-ﬂavoured alcoholic beverages has continued to be allowed. This has led to a resurgence of the medical uses of wormwood.

Wormwood has always been one of my favourite herbs, not only as a parasite treatment but as an all-round healer for the gut and liver. It has also been known to induce a heightened state of dream awareness and even hallucinogenic effect in large doses. (15) People often report vivid dreams, and an increased sense of happiness when completing our herbal detox program which includes a high dose of wormwood, so maybe this herb is responsible.

Another great tonic herb to potentially grow in your garden.

Wormwood can be found in these products:

(9) Composition and antimicrobial activity of the essential oil of Artemisia absinthium from Croatia and France. http://www.ncbi.nlm.nih.gov/pubmed/12624823

(12) Comparison of the effects of Artemisia vulgaris and Artemisia absinthium growing in western Anatolia against trichinellosis (Trichinella spiralis) in rats. http://www.ncbi.nlm.nih.gov/pubmed/18325496