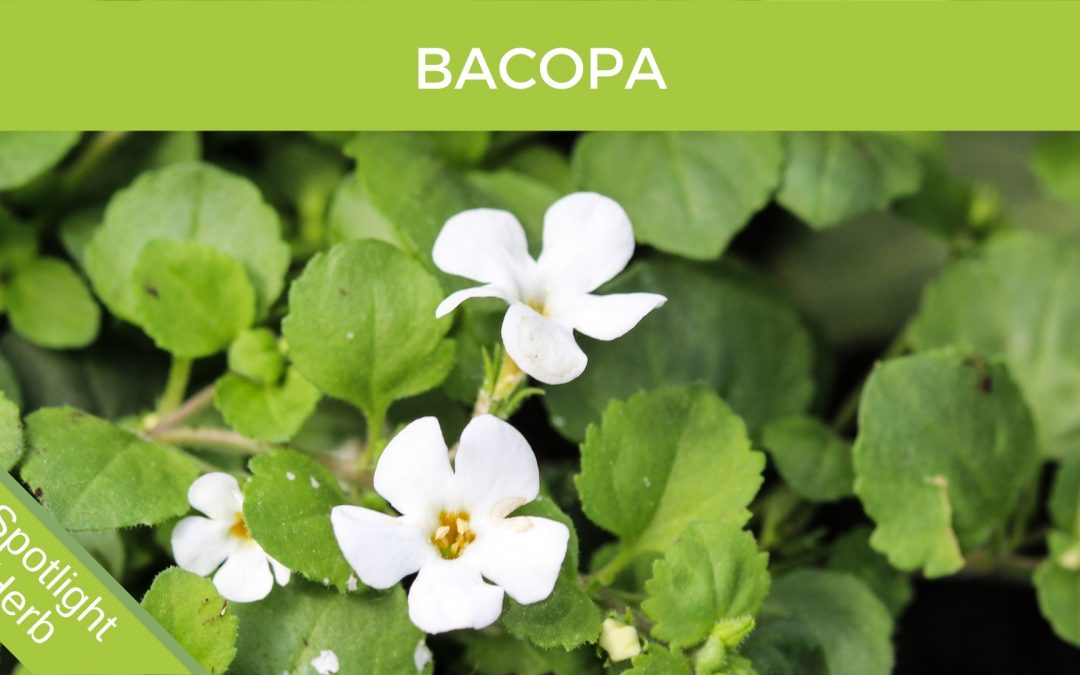 Bacopa monnieri is a non-aromatic herb. The leaves of this plant are succulent, oblong, and 4–6 mm (0.16–0.24 in) thick. Leaves are oblanceolate and are arranged oppositely on the stem. The flowers are small, actinomorphic and white, with four to five petals. It can even grow in slightly brackish conditions. Propagation is often achieved through cuttings.

Traditional Use of Bacopa

Bacopa monnieri (BM), popularly known as Brahmi, has been traditionally used in Ayurveda for eons for its memory-enhancing properties.

India, Nepal, Sri Lanka, China, Taiwan, Vietnam and Florida, Hawaii, and some other southern states of USA. It is also known as “Brahmi.” Its description in Indian scriptures dates back to 5000 BC. It has been used in Ayurveda since 500 AD as “Medhya Rasayana” for treatment of anxiety, poor memory, epilepsy, improvement of cognitive processes, comprehension, memory, and recall. It is currently promoted as a brain tonic and many formulations are available. (1)

Unlike the potentially addictive and forceful action of widely used psychostimulants, chronic and moderate administration of BM appears to nourish rather than deplete neurons, an action compatible with 1400 years of Ayurvedic study. (2) 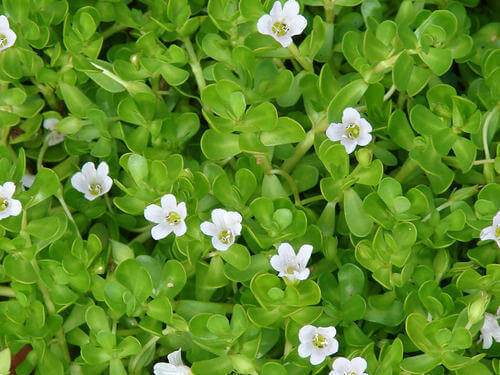 The main nootropic constituents of BM are believed to be dammarane types of triterpenoid saponins known as bacosides, with jujubogenin or pseudo-jujubogenin moieties as aglycone units. Bacosides comprise a family of 12 known analogs. Novel saponins called bacopasides I–XII have been identified more recently. The alkaloids brahmine, nicotine, and herpestine have been catalogued, along with d-mannitol, apigenin, hersaponin, monnierasides I–III, cucurbitacins and plantainoside B. The constituent most studied has been bacoside A, which was found to be a blend of bacoside A3, bacopacide II, bacopasaponin C, and a jujubogenin isomer of bacosaponin C (2)

In one randomized double-blind placebo-controlled noncrossover, parallel trial. Sixty medical students of either gender from the second year of medical school, third term, regular batch, were enrolled from Government Medical College, Nagpur, India. Baseline biochemical and memory tests were done. The participants were randomly divided into two groups to receive either 150 mg of standardized extract of Bacopa monnieri (Bacognize) or a matching placebo twice daily for six weeks. All baseline investigations were repeated at the end of the trial. Students were followed up for 15 days after the intervention. Results. Statistically, significant improvement was seen in the tests relating to the cognitive functions with the use of Bacopa monnieri. (1)

Chronic effects of Bacopa when assessed on memory functions in 76 adults from 40 to 60 years age group, for three months, showed significant effects on retention of new information (1)

The exact etiology of Alzheimer’s dementia is uncertain and controversial, but there is a general consensus about some of the factors that may be involved. Free radical-induced Oxidative stress (OS) is one such factor. It is unclear whether OS is primary to the disease process or a secondary by-product, but the presence of OS does appear to play a major role in illness severity. Cell loss, impaired energy metabolism, dystrophic neurites, DNA damage, β-amyloid plaques, and neurofibrillary tangles are also thought to play key roles. (2)

Mathew and Subramanian examined the effect of BM extract on free β-amyloid aggregation in vitro using fluorescence imaging. They compared a whole plant BM methanol extract (100 μg/μL) to 12 other herb extracts, finding several to prevent aggregation of β-amyloid plaques and to dissociate pre-formed fibrils. Incubating with BM extract was found to “almost completely” inhibit β-amyloid formation. It is unclear whether this activity would take place in vivo. (2)

A recent study by Piyabhan and Wetchateng investigated the neuroprotective function of BM (40 mg/kg per day orally for 14 days, n=72) on novel object recognition in a phencyclidine-induced rat model of schizophrenia, finding highly significant protection and improved performance. The same authors conducted another study on vesicular glutamate transporter 1 (VGLUT1), of which schizophrenics have a deficit in the prefrontal cortex, striatum, and hippocampus. Again, a phencyclidine rat model was used. The researchers found significant improvement in all three brain regions in the BM group. (2)

The brain is especially susceptible to oxidation because it is metabolically active, possesses high levels of pro-oxidant iron, and is composed of unsaturated lipids (prone to lipid peroxidation). Furthermore, the blood-brain barrier prevents many exogenous anti-oxidants from quenching these oxidants.

Anbarasi et al. assessed the neuroprotective role of bacoside A against OS in the brains of rats exposed to cigarette smoke by measuring concentrations of enzymatic and non-enzymatic antioxidants as well as trace elements. The researchers administered 10 mg/kg aqueous bacoside A gavage daily and found that BM significantly increased brain levels of glutathione, vitamin C, vitamin E, and vitamin A in rats exposed to cigarette smoke. (2)

Some of the same authors found Bacopa to interact with CREB and another synaptic plasticity-related pathway, showing Bacopa significantly improved retention performance in a brightness discrimination task. Further research into intracellular signaling molecules is warranted. (2)

Adequate perfusion of blood to capillary beds within the brain is of utmost importance. Otherwise, deficits of oxygen and nutrients will ensue alongside the buildup of cytotoxic waste. Diminished cerebral blood flow is implicated in various pathologies, including dementia. (2)

Charles et al. found BM extract up-regulated tryptophan hydroxylase (TPH2) and serotonin transporter (SERT) expression in rats. The animals were orally administered BM extract (31% bacosides, 40 mg/kg for 15 days) and tested on a Y-maze, hole board, and passive avoidance tasks. The rats’ performance dose-dependently and highly significantly improved on seven of eight measures of latency and acquisition. Levels of 5-HT in the BM groups were almost double the control level, which returned to baseline after the treatment period. Glutamate and ACh levels were increased by BM, but not significantly. Dopamine levels were significantly lower (approximately 9%) in BM-treated rats. There were also changes noted in receptor expression. BM elicited highly significant increases in both TPH2 and SERT mRNA levels, almost double the control. These elevated levels returned to baseline 24 days after BM administration ceased. This experiment supports the case that BM enhances learning and memory, but possibly through a novel mechanism involving 5-HT, SERT, and TPH2. The considerable elevation of 5-HT and moderate but significant reduction in Dopamine require further investigation. (2)

These extracts are taken from just a couple of the over 750 published research articles on this incredible herbal medicine.

It seems pretty obvious that using Bacopa as herbal medicine or daily supplement could be a good long-term approach to improving mental function, brain health, and long-term mental health.