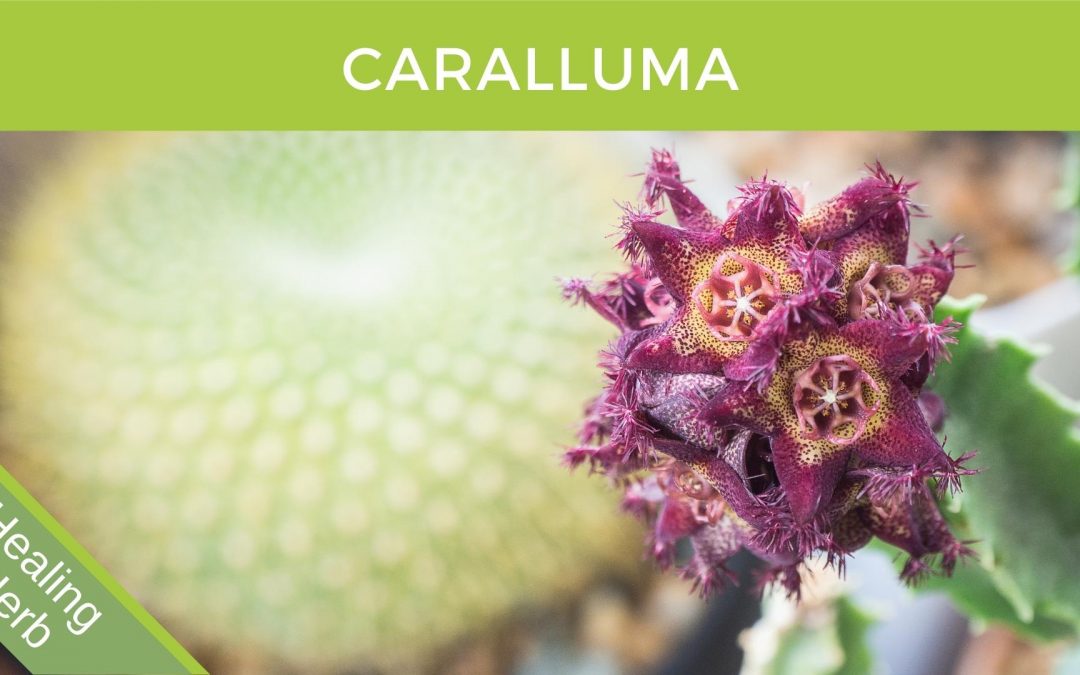 What an awesome plant Caralluma is and a classic example of the “law of signatures”. In other words, the personal signature of the plant by its nature exemplifies what it can be used for as a medicine.

Being a type of cactus, it requires very little by way of nutrition to stay alive. It also exudes a terrible smell, like rotting meat so it attracts flies. The law of signatures would logically say that it could be used to suppress the appetite.

Caralluma Fimbriata extract has received Generally Recognized As Safe (GRAS) status for use as a nutraceutical to combat the most serious public health concern i.e. obesity. (3)

Let’s see if the traditional use and scientific evidence backs this up.

Description
In keeping with the holistic approach, native populations of India consume several locally growing medicinal plants as part of their diets. Edible, succulent cacti grow wild all over India and are part of the daily diets of several native populations. The Caralluma genus is one such genus of edible cacti, which includes several species, many of which grow across India. It is an edible cactus, used by tribal Indians to suppress hunger and enhance endurance. (1)

It grows wild in urban centers as well and is planted as a roadside shrub and as a boundary marker in gardens. Caralluma Fimbriata is essentially a vegetable of daily use in tribal India. It is eaten in several forms. It is cooked like a regular vegetable, with spices and salt, it is used in preserves like chutneys and pickles and it is even eaten raw.

Traditional Use
Indian tribals chew chunks of Caralluma Fimbriata to suppress hunger when on a day’s hunt. The cactus is used among the labor class in South India to suppress appetite and enhance endurance. (2)

The tribal community treats Caralluma Fimbriata as a food item for daily consumption. They believe that Caralluma is a unique herb which cures common health problems as well as its fantastic ability to suppress appetite and thirst. They eat a handful of Caralluma chunks during their hunting schedule which may last many days in a stretch. A bag full of Caralluma chunks is enough to cater the tribal group when they go for hunting; no need to carry food. (2)

Caralluma Fimbriata has been clinically demonstrated to suppress appetite and stop hunger pangs in patients. It is believed that the pregnane glycosides in Caralluma Fimbriata inhibit the hunger sensory mechanism of the hypothalamus. The main reason why most weight-loss programs fail is that the patient always feels dull and tired after attaining weight loss. This makes the patient go back to his old eating habits and results in a rebound weight gain. Patients on Caralluma however, report feeling more energetic and have gained lean muscle mass while losing fat. (2)

Scientific Evidence
A double-blind, placebo-controlled, randomized clinical trial on Caralluma Fimbriata extract was done on 50 human subjects. This study consisted of 50 obese patients, 25 on the active compound and 25 on placebo. The trial lasted for eight weeks. Subjects were tested for changes in key indicators of weight-loss, including body measurements, body fat composition, BMI, body weight and systemic functions.

In another study, Caralluma extract appeared to suppress appetite, and reduce waist circumference when compared to placebo over a 2 month period. (4)

Conclusion
I don’t know about you, but I’m impressed. A simple plant can do all of this!
This is why I love herbal medicine and I know these plants aren’t here by accident or random evolution, but by design.

(2) A pilot study investigating the effect of Caralluma Fimbriata extract on the risk factors of metabolic syndrome in overweight and obese subjects: a randomized controlled clinical trial. Pubmed http://www.ncbi.nlm.nih.gov/pubmed/23642949