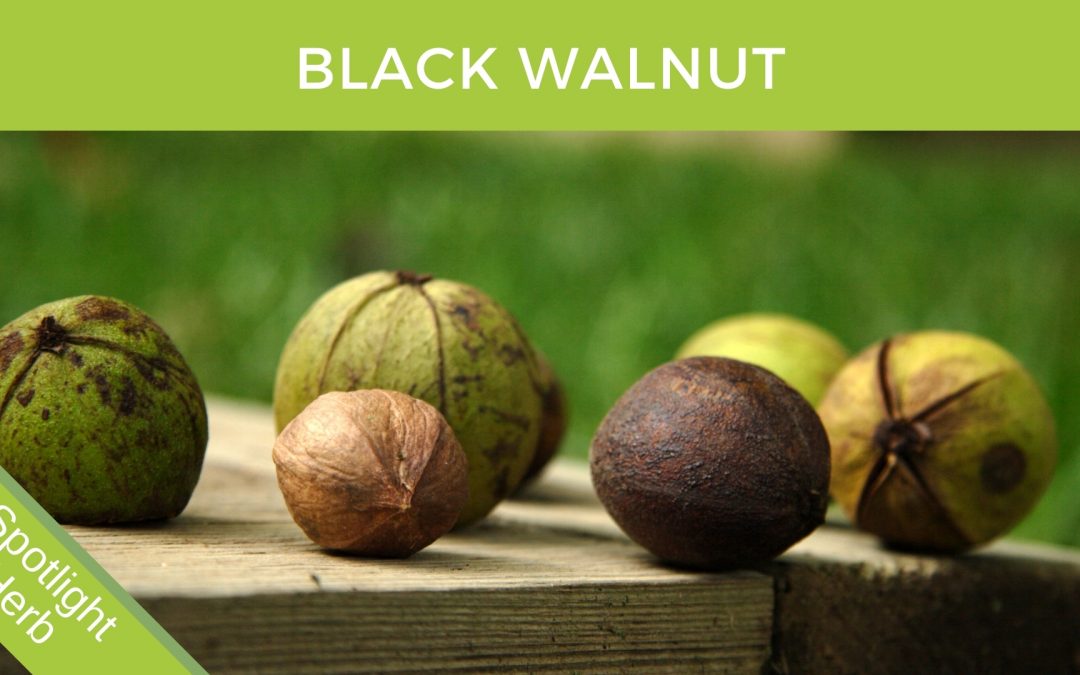 One of the greatest benefits of completing a Herbal DETOX program is the reduction in parasitic infestations, the balancing of intestinal bacteria, and general digestive health. Here we will investigate one of the key antiparasitic ingredients Black Walnut.

While there are those who say that Black Walnut hulls can effectively reduce the risks of heart attacks, it is more widely known for its anti-parasitic qualities. It is said to have effectively killed more than 100 known parasites. It has been proven to be a strong natural remedy for the treatment of acne, thyroid disease, colitis, eczema, hemorrhoids, ringworm, sore throats, tonsillitis, skin irritations, and wounds. (2)

Black walnut has been traditionally used to expel worms from the intestinal system. (7)

Active Constituents ​
The main active ingredients are tannins such as galloyglucose and ellagitannins, and juglone (5-hydroxy-alphanapthaquinone). Walnut shells are very rich in vitamin C , and betacarotene, B1,B2, and B6 are found in the leaves. (5)

Juglone is a napthoquinone pigment that occurs as a natural product in the roots, leaves, nut-hulls, bark, and wood of black walnut (Junglans nigra) (1) Juglone is a powerful and toxic substance that prevents many plants from growing within the tree’s root zone, extending as much as 80 ft (24 m) from a mature black walnut trunk. (5)

Traditionally in herbal medicine, the green hulls of black walnut are dried and powdered for use internally.

Therapeutic uses and Scientific Evidence
Black walnut is used to treat parasitic worm infections and certain other infections including diphtheria and syphilis. It is also used for leukemia. Some people use black walnut as a gargle, apply it to the scalp as hair dye, or put it on the skin to treat wounds. (4) It is used to expel tapeworms and other internal and external parasites. The American Medical Ethnobotany Reference Dictionary claims that the juice from the black walnut hull is effective against ringworm. (6)

In vitro studies have suggested that plumbagin, an active constituent, may inhibit the motility and hatching of specific worm larvae. (8)

It is the combination of Black Walnut Hulls, Wormwood, Clove, and Golden seal taken together in large doses during the Ultimate Herbal DETOX which makes it such an effective parasite treatment.

(6) Moerman. D. Native American Ethnobotany. Very comprehensive but terse guide to the native uses of plants. Excellent bibliography, fully referenced to each plant, giving a pathway to further information. Not for the casual reader. http://www.amazon.com/Native-American-Ethnobotany-Daniel-Moerman/dp/0881924539