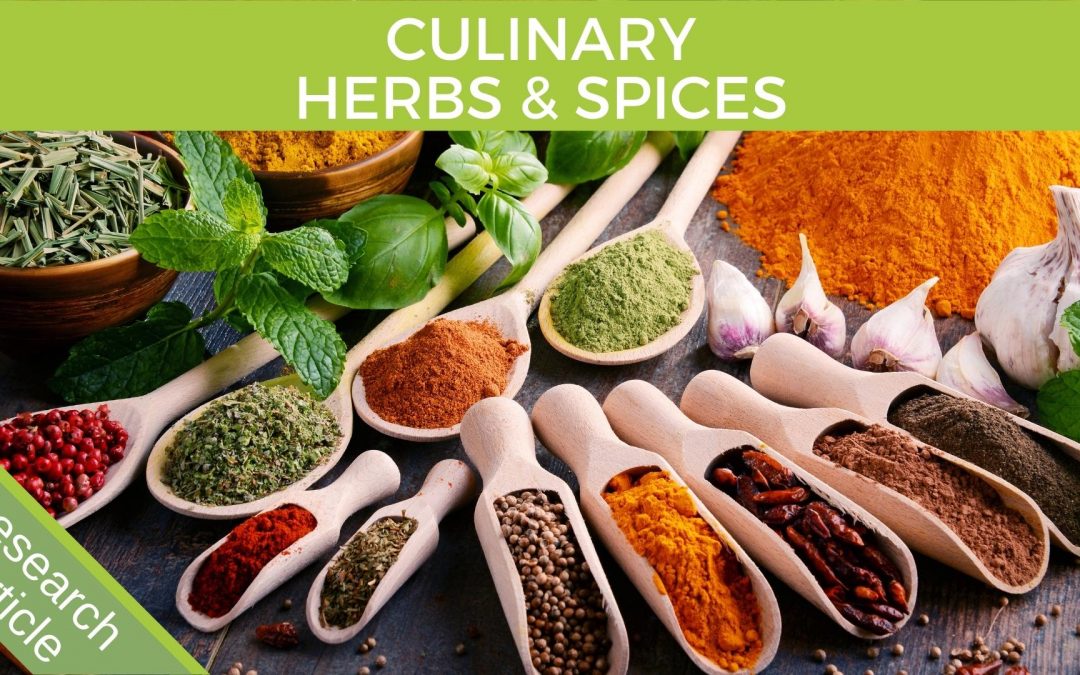 During your Herbal Detox program, we include lots of culinary herbs and spices in many of the recipes. That’s because the specific combination of medicinal herbs all work together and then adding the extra herbs in food adds to the overall cleansing effect. In herbal medicine, this is called synergy and the impact can be huge.

Culinary herbs and spices are not just for flavoring our food but they also providing a veritable feast of health-giving phytonutrients, making them superfoods in their own right.

Below we will mention just a few of the many culinary herbs and spices and touch on some of their health benefits.

Polyphenols and polyphenol-rich foods especially fruits, vegetables, and green tea, are widely known for their antioxidant properties. Culinary herbs and spices have also been shown to possess these properties.
Furthermore, evidence suggests that it is the polyphenols that have a significant role to play in conferring these properties and as these foods have high polyphenol contents they may be important dietary sources of the purported protective properties that their polyphenols confer. (1)

Even if you have a relatively low intake of culinary herbs and spices, it does not necessarily mean that they are of little value. They have a relatively high polyphenol content, and thus ultimately the potential biological impact of these is cannot be ignored. (1)

A study was performed on the impact of cooking on a number of common culinary herbs and spices, namely Cinnamon, Cloves, Fennel, Ginger, Parsley, Rosemary, Sage and Thyme at amounts used in the preparation of food. Microwaving, simmering and stewing (includes stir-frying) all increased the antioxidant capacity probably as a result of heat liberating the antioxidant compounds. In contrast, cooking techniques that involved dry heating, grilling, and frying, resulted in a decrease in antioxidant capacity. (1)

See below a short list of just a few of the common culinary herbs and their health benefits.

Basil
The essential oil of Basil has been shown to have anti-anxiety and sedative effects similar to that of sage. (2) Basil has also shown an antimicrobial effect against several strains of bacteria including Pseudomonas aeruginosa, Shigella sp., Listeria monocytogenes, Staphylococcus aureus and two different strains of Escherichia coli. (3) Basil oil has also been shown to have significant antifungal effects. (4)

Oil of Basil contains 2.5% caryophyllene (BCP) which interacts with cannabinoid receptors in the brain. BCP is potent enough to have an anti-inflammatory impact at normal dietary levels. Herbs such as Basil and Oregano contain large amounts of the compound, that may protect against Crohn’s Disease and other inflammatory bowel diseases. (5)

Chilli
The common Chili used to make Cayenne Pepper has far too many health benefits to list here, so we will only mention to most well known. Cayenne has been shown to encourage weight loss. Three main areas of potential benefit for weight management were found: increased energy expenditure increased lipid oxidation and reduced appetite. (7)

Red Chili Pepper has beneficial effects on metabolic syndrome and can decrease the risk of death due to cardiovascular diseases. (6)

Beneficial influences of capsaicin on the gastrointestinal system include digestive stimulant action and modulation of intestinal ultrastructure so as to enhance permeability to micronutrients. (8)

Cinnamon
Cinnamon has been shown to reduce levels of C-reactive protein (CRP) in the blood. CRP is used to test the inflammation levels in the body. (9) One study showed that 1g of Cinnamon for 12 weeks reduced fasting blood glucose among poorly controlled Type 2 Diabetes patients. (10)

Cloves
The antimicrobial activities of Clove have been proved against several bacteria strains such as Escherichia coli (E. coli), Staphylococcus aureus and Bacillus cereus. (11) This makes Clove tea a great simple home remedy for the common stomach bug, especially effective with children.

Fennel
Fennel seed revealed a highly significant diuretic effect which proves the earlier folk claim of Fennel which was reported in the USA. (12) Crying time reduction was observed in 85.4% of infant colic subjects using Fennel. (12) More commonly Fennel seed is used to soothe digestion after eating. Caraway seeds have a similar effect.

Garlic
The medicinal effects of Garlic have been well documented and include Anti-fungal, Anti-Bacterial, Anti-parasitic and immune boosting. (13) The wealth of scientific literature supports the proposal that Garlic consumption has significant effects on lowering Blood Pressure and Cholesterol. (13) For immune system effects raw Garlic is best, but for the cardiovascular benefits, cooked Garlic is just as effective.

Ginger
Ginger has been reported to exert anti-oxidant and anti-ulcer, anti-inflammatory, anti-tumor, gas-reducing, stomach protective, and circulatory benefits. (14) Ginger is often used in herbal medicine to improve the circulation of other herbal remedies and works in a similar way to Turmeric and Black Pepper in this area. One of the most popular uses for Ginger is in the reduction of nausea and air sickness.

Paprika
Paprika contains a wide range of antioxidants, particularly the carotenoids including zeaxanthin and capsanthin (15), along with chlorophyll, polyphenols, tannins, and flavonoids. (16) The capsanthin content has been shown to help raise healthy HDL Cholesterol levels potentially protecting the heart. (17)

Parsley
Parsley is a very popular herb in Europe, it is widely spread and easy to grow. Its herb and fruits are known to be diuretic, smooth muscle relaxant and Liver protective. The most important identified active ingredients are flavonoids, cumarins, and vitamin C. The bioactive flavonoid apigenin has anti-inflammatory, antioxidant and anticancer activities. (18)

Rosemary
Rosemary contains many bioactive molecules. It has the phytocompounds responsible for several pharmacological activities, such as anti-inflammatory, antioxidant, antimicrobial, anti proliferative, antitumor and protective, inhibitory and attenuating activities. (19) Most commonly in herbal medicine rosemary is known as a brain protector similar to the herb Gingko Biloba. 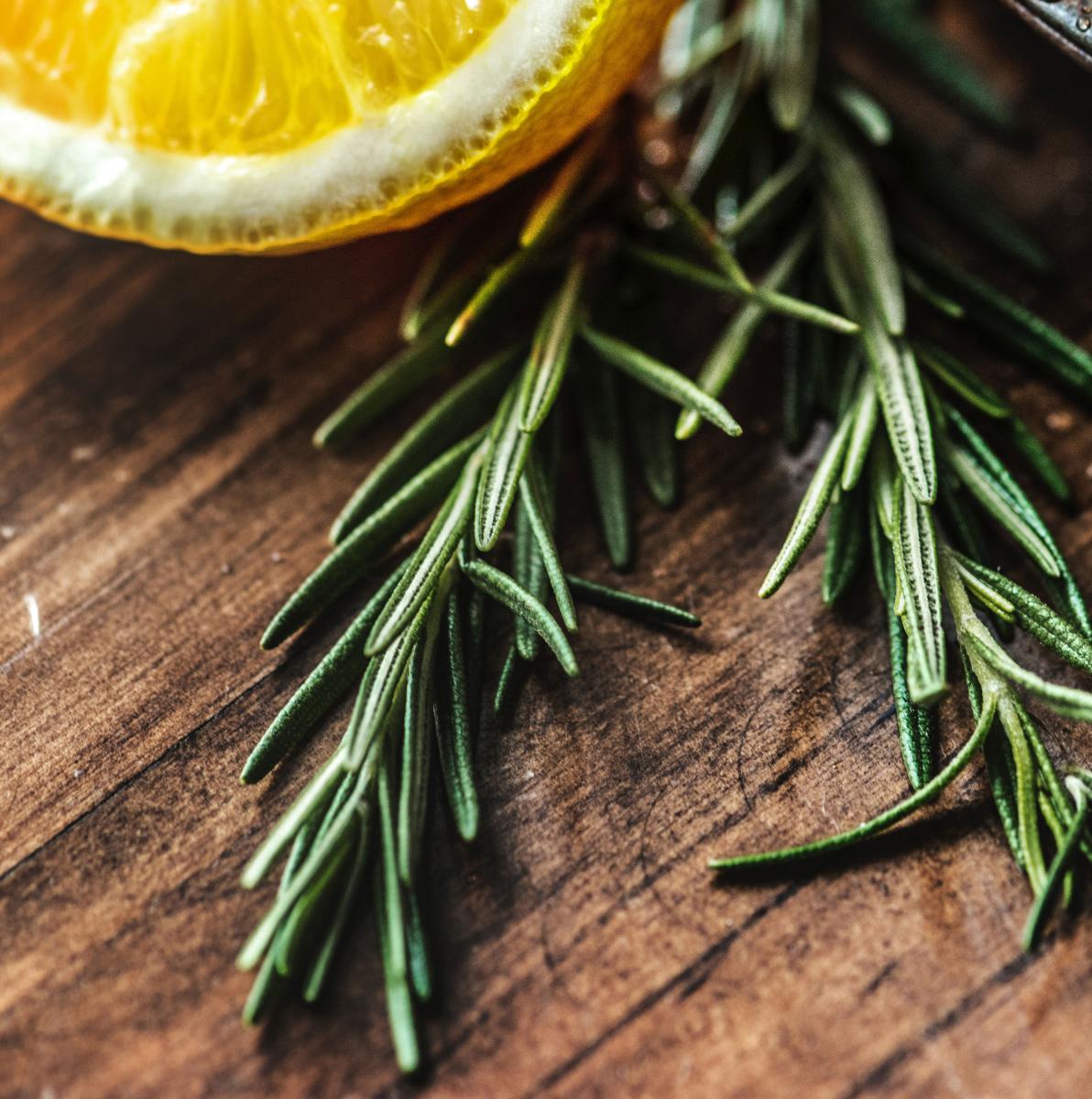 Saffron
It is shown that the administration of Saffron is from time immemorial. Studies, both in vitro and in vivo, have shown it to be a medicinal plant because it possesses therapeutic properties including activity on the nervous and cardiovascular systems, and in the Liver. Plus it has antidepressant, anxiolytic and anticancer properties. Cocetin from Saffron has protective effects against damage to the retina, inhibiting degeneration of photoreceptor and retinal dysfunction making it useful in treating macular degeneration. (20)

Sage
It has been used for the treatment of different kinds of disorders including seizure, ulcers, gout, rheumatism, inflammation, dizziness, tremor, paralysis, diarrhea, and hyperglycemia. In recent years, this plant has been a subject of intensive studies to document its traditional use and to find new biological effects. These studies have revealed a wide range of pharmacological activities. (21)

Turmeric
To date, over 100 different clinical trials have been completed with curcumin, which clearly shows its safety, tolerability and its effectiveness against various chronic diseases in humans. Modern science has revealed that curcumin mediates its effects by modulation of several important molecular targets, including transcription factors, enzymes, cell cycle proteins, cytokines, receptors, and cell surface adhesion molecules. Because it can modulate the expression of these targets, curcumin is now being used to treat Cancer, Arthritis, Diabetes, Crohn’s Disease, cardiovascular diseases, Osteoporosis, Alzheimer’s disease, Psoriasis, and other pathologies. (22)

When completing a herbal detox program like our Ultimate Herbal Detox you will already be getting 24 incredible medicinal healing herbs. So can you imagine the combined benefits of including all of these culinary herbs on your detox diet plan? The profound health benefits will be huge!

Plant-based food, herbs, and spices should form the foundation of your long-term diet plan with medicinal cleansing herbs as that extra top-up every few months.

With this combination in hand, you simply can’t go wrong!

Many blessings of health,

(1) Culinary Herbs and Spices: Their Bioactive Properties, the Contribution of Polyphenols and the Challenges in Deducing Their True Health Benefits. PUBMED https://www.ncbi.nlm.nih.gov/pmc/articles/PMC4227268/

(2) Evaluation of the anxiolytic and sedative effect of essential oil and hydroalcoholic extract of Ocimum basilicum L. and chemical composition of its essential oil. PUBMED https://www.ncbi.nlm.nih.gov/pmc/articles/PMC4698864/

(3) Antimicrobial Activity of Various Extracts of Ocimum Basilicum L. and Observation of the Inhibition Effect on Bacterial Cells by Use of Scanning Electron Microscopy. PUBMED https://www.ncbi.nlm.nih.gov/pmc/articles/PMC2816579/

(6) A review of the effects of Capsicum annum L. and its constituent, capsaicin, in metabolic syndrome. PUBMED https://www.ncbi.nlm.nih.gov/pmc/articles/PMC6000222/

(7) Capsaicinoids and capsinoids. A potential role for weight management? A systematic review of the evidence. http://www.ncbi.nlm.nih.gov/pubmed/22634197

(21) Pharmacological properties of Salvia officinalis and its components. PUBMED https://www.ncbi.nlm.nih.gov/pmc/articles/PMC5634728/