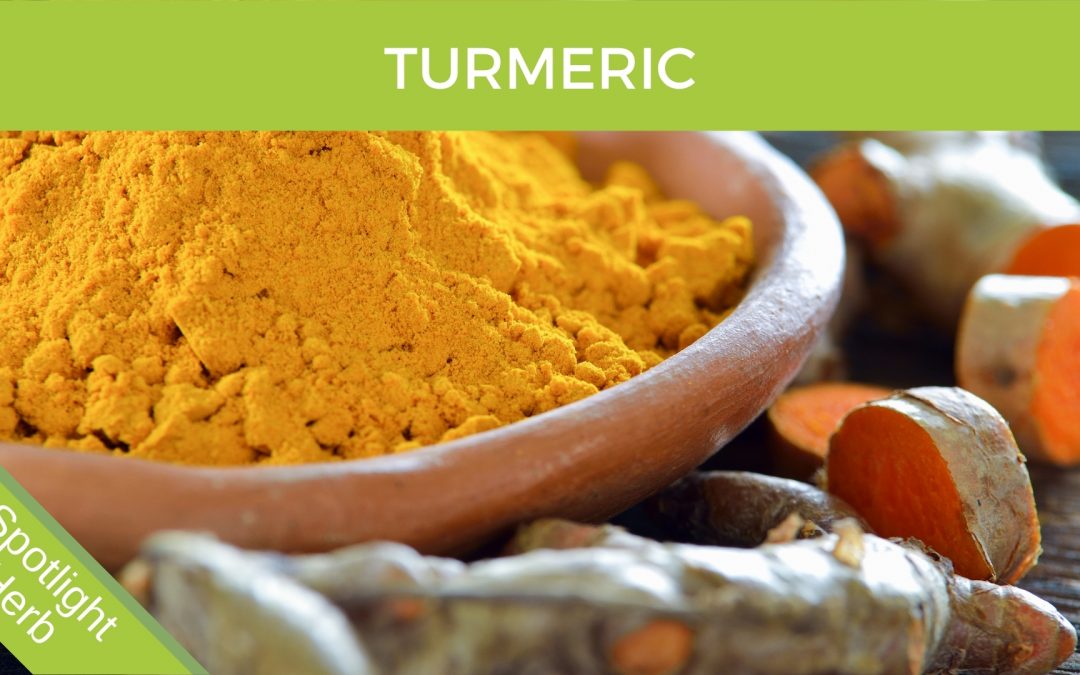 Turmeric is renowned for being bright and yellow. The slightest amount spilled on your shirt or tablecloth is almost impossible to remove. It stains bright yellow and colors your foods the same. This yellow pigment in turmeric is like gold for our preserving brains.

The rule of thumb in herbal medicine is the law of signatures. This means a plant looks and acts in a similar way to its medicinal value. Slice a carrot across the section and you will the human iris, a grape looks like a blood cell, and herbs that stain often have very good antioxidant, cell-protecting ability.

There is far too much that could be said about turmeric, so I will try and cover the key points. 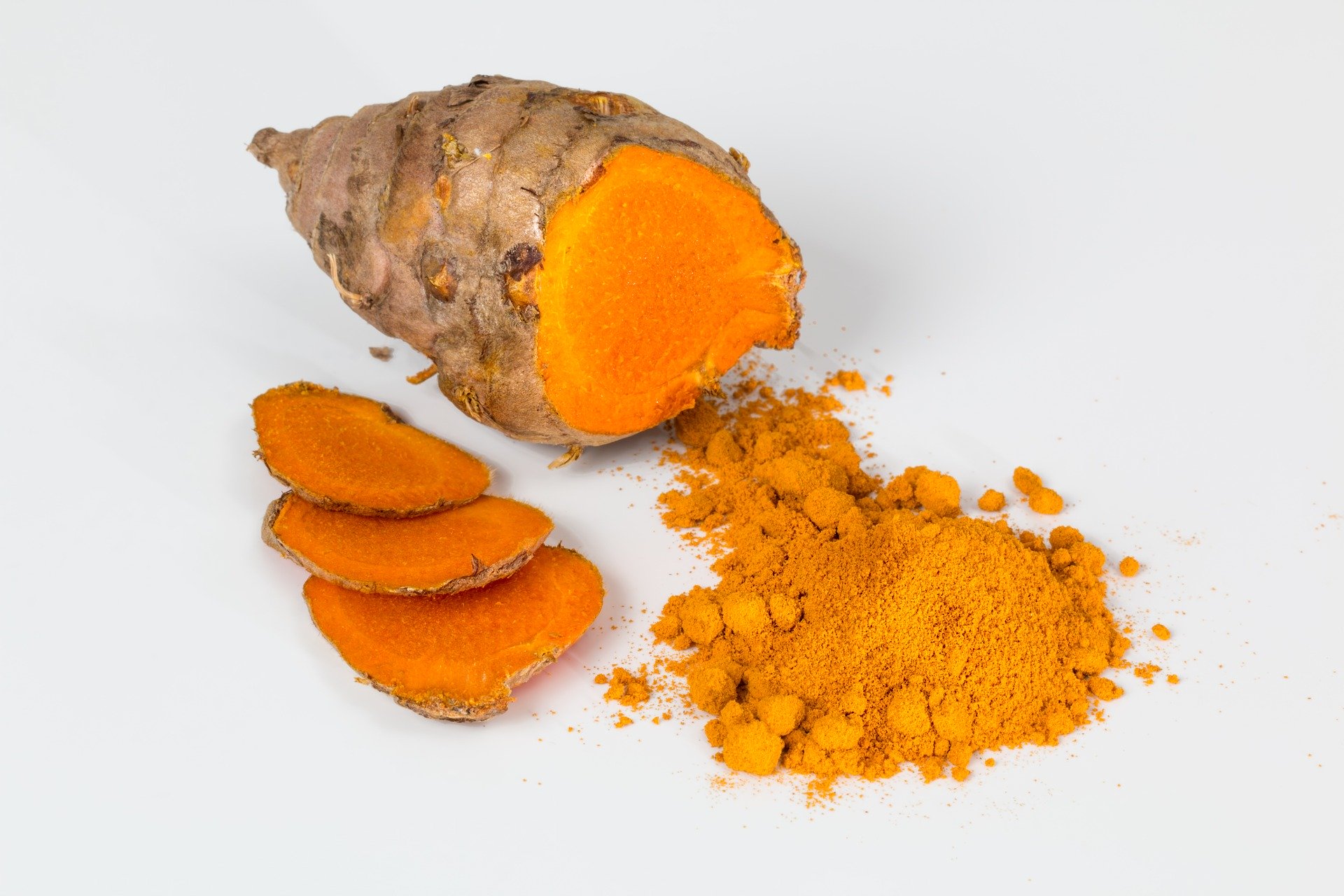 Turmeric has been used in Asia for thousands of years and is a major part of Ayurveda, Siddha medicine, traditional Chinese medicine, Unani, and the animistic rituals of Austronesian peoples. It was first used as a dye, and then later for its supposed properties in folk medicine.

Curcumin, a yellow pigment in the Indian spice Turmeric (Curcuma longa), is the main bioactive component contained in Curcuma Longa, largely employed in traditional medicine. Recently, beneficial properties, useful for the prevention and treatment of several disorders, have been discovered for this compound.

Curcumin is chemically known as diferuloylmethane, and was first isolated exactly two centuries ago in 1815 by two German Scientists, Vogel and Pelletier. The first study on its biological activity as an antibacterial agent was published in 1949 in Nature and the first clinical trial was reported in The Lancet in 1937. (1)

Curcumin, (1,7-bis(4-hydroxy-3-methoxy phenyl)-1,6-hep-tadiene-3,5-dione) is a polyphenol compound extracted from the rhizome of Curcuma longa Linn (family Zingiberaceae) and it is commonly used in the Asian continent, especially in India, as a spice to color and flavor food. It is also used as cosmetic product, particularly for the skin. The curcuminoid complex, found in the rhizome of turmeric (2.5–6%) contains curcumin (CUR) (CUR-diferuloylmethane ~85%), demethoxycurcumin (DEM ~15%), bis-demethoxycurcumin (bis-DEM ~5%), and cyclocurcumin. (5)

Numerous studies have indicated that curcumin is a highly potent antimicrobial agent and has been shown to be active against various chronic diseases including various types of cancers, diabetes, obesity, cardiovascular, pulmonary, neurological, and autoimmune diseases. To date, over 100 different clinical trials have been completed with curcumin, which clearly shows its safety, tolerability, and its effectiveness against various chronic diseases in humans. (1)

Modern science has revealed that curcumin mediates its effects by modulation of several important molecular targets, including transcription factors, enzymes, cell cycle proteins, cytokines, receptors, and cell surface adhesion molecules. Because it can modulate the expression of these targets, curcumin is now being used to treat cancer, arthritis, diabetes, Crohn’s disease, cardiovascular diseases, osteoporosis, Alzheimer’s disease, psoriasis, and other pathologies. (4)

Curcumin has a broad spectrum of biological activities. For example, it has been reported as possessing antioxidant, anti-AD, anticarcinogenic, antimutagenic, and anti-inflammatory properties. (6) 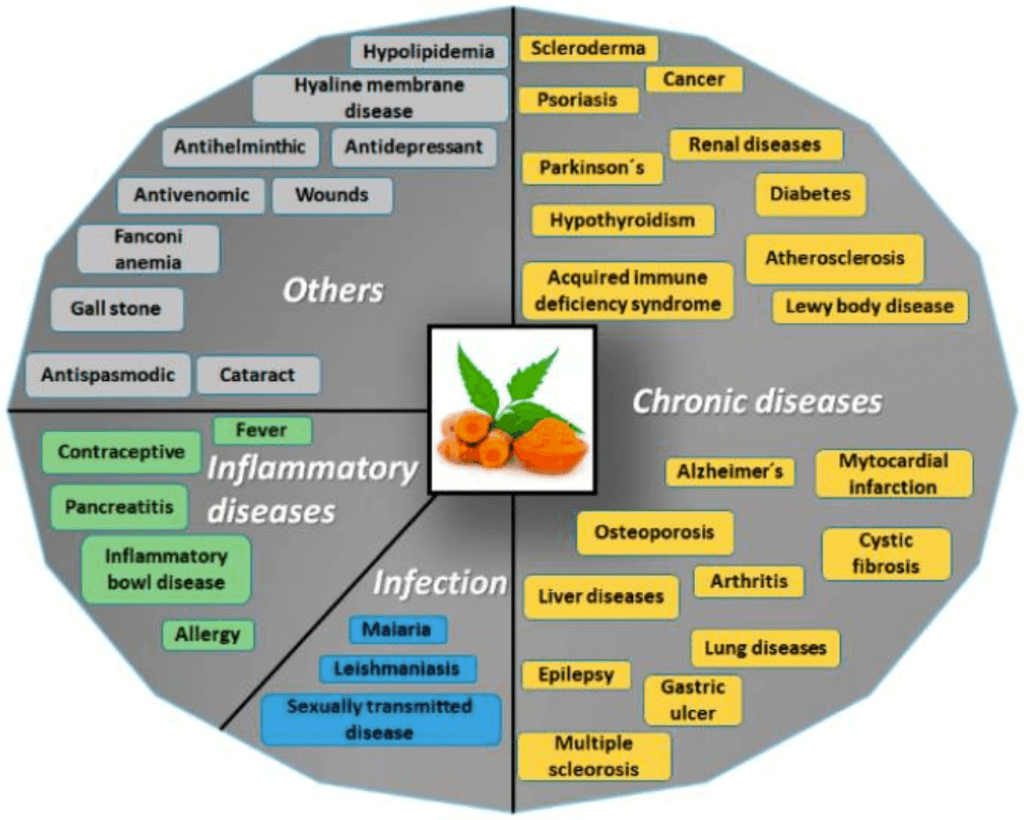 Extensive research over the last half-century has revealed several important functions of curcumin. It binds to a variety of proteins and inhibits the activity of various kinases. By modulating the activation of various transcription factors, curcumin regulates the expression of inflammatory enzymes, cytokines, adhesion molecules, and cell survival proteins.

Various preclinical, clinical, and animal studies suggest that curcumin has potential as an antiproliferative, anti-invasive, and antiangiogenic, as a mediator of chemoresistance, chemopreventive, and as a therapeutic agent. Thus, curcumin a spice once relegated to the kitchen shelf has moved into the clinic and may prove to be “Curcumin.” (2) 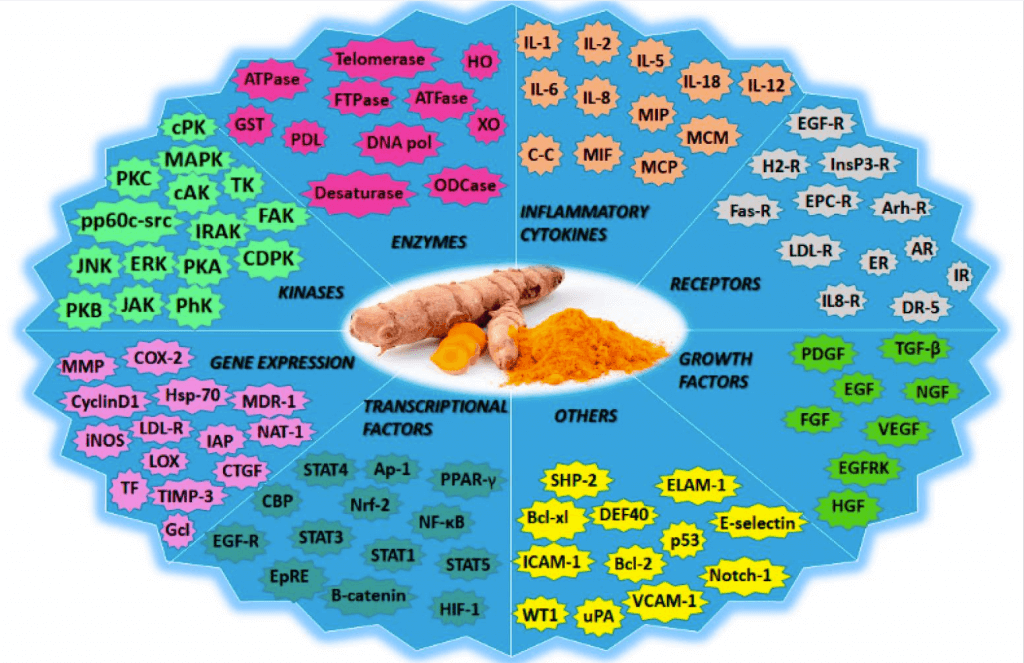 Turmeric possesses multiple medicinal uses including treatment for Alzheimer’s disease (AD) due to curcuminoids, a mixture of curcumin, demethoxycurcumin, and bisdemethoxycurcumin, which are the active constituents of turmeric. (3)

With respect to antioxidant activity, evidence has shown that curcumin can directly scavenge several free radicals as the result of its two phenolic sites. Likewise, curcumin has been effective against the generation of reactive oxygen species (ROS) and reactive nitrogen species (RNS) in the cellular environment. Curcumin also reduces low-density lipoprotein (LDL), and inhibits the oxidation of proteins and DNA. At the enzymatic level, curcumin inhibits lipoxygenase/cyclooxygenase and xanthine dehydrogenase/oxidase, which are two enzymes related to the generation of ROS, and upregulates superoxide dismutase and glutathione peroxidase, which are two first-line enzymes of defense against oxygen-free radicals (6).

Zbarsky et al. applied, in the unilateral 6-hydroxydopamine (6-OHDA) rat model of PD, natural compounds, with phenolic groups in their structure to evaluate the neuroprotection level. These authors reported that, with the sub-chronic administration of curcumin, the loss of dopaminergic neurons in the substantia nigra pars compacta was reduced significantly. (6)

It has been demonstrated that curcumin as a plant derivative has a wide range of antiviral activity against different viruses including Influenza, HIV, herpes simplex virus, coxsackieviruses, human papillomaviruses, hepatitis B virus, and Japanese encephalitis virus. (7)

There is simply far too much research and information available on Turmeric for a full review to be given here. Suffice it to say this herb is medicinal gold.

As a spice, it should be used in your food regularly for best results.

(4) Curcumin: getting back to the roots. PUBMED https://www.ncbi.nlm.nih.gov/pubmed/?term=curcuma+longa+human+alzheimers+turmeric+india

(7) A Review on Antibacterial, Antiviral, and Antifungal Activity of Curcumin. PUBMED https://www.ncbi.nlm.nih.gov/pmc/articles/PMC4022204/