Eating for your metabolic body type 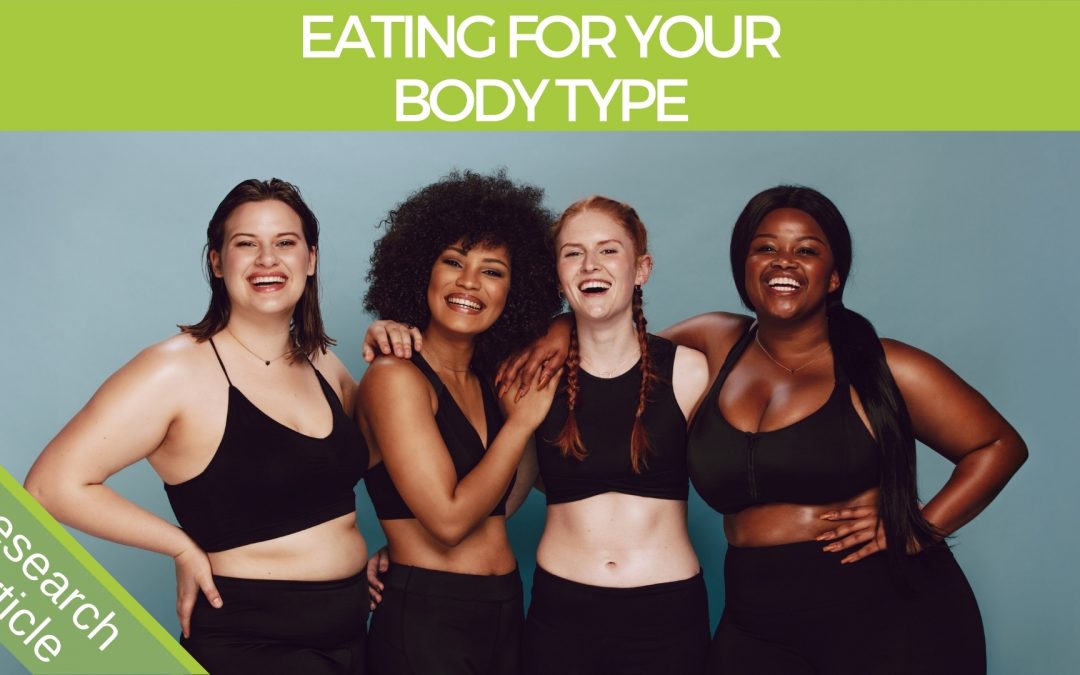 We all know that poeple are born different. We’re not all the same when it comes to looks, personality, and behaviour. The interesting thing about that fact is that it also applies to metabolism and body chemistry.

The interest in a connection between the constitutional characteristics (somatotype) and the health of the individual dates back to ancient times. Back in 430 BC, Hippocrates described two types of physical build, the first being thickset, strong, and muscular; and the second being gracile and physically weak. (2)

Since then anthropologists, psychiatrists, psychologists, physiologists, endocrinologists, phrenologists, and other specialists have researched different aspects of this issue. (2)

The relationship between energy value and nutrients intake and the body shape and size parameters (weight, height, waist, and hip circumferences) has become an interesting research area for nutritionists and dieticians. (3)

This widely accepted way of body typing the population called Somatotyping and its impact will be the topic of this article. 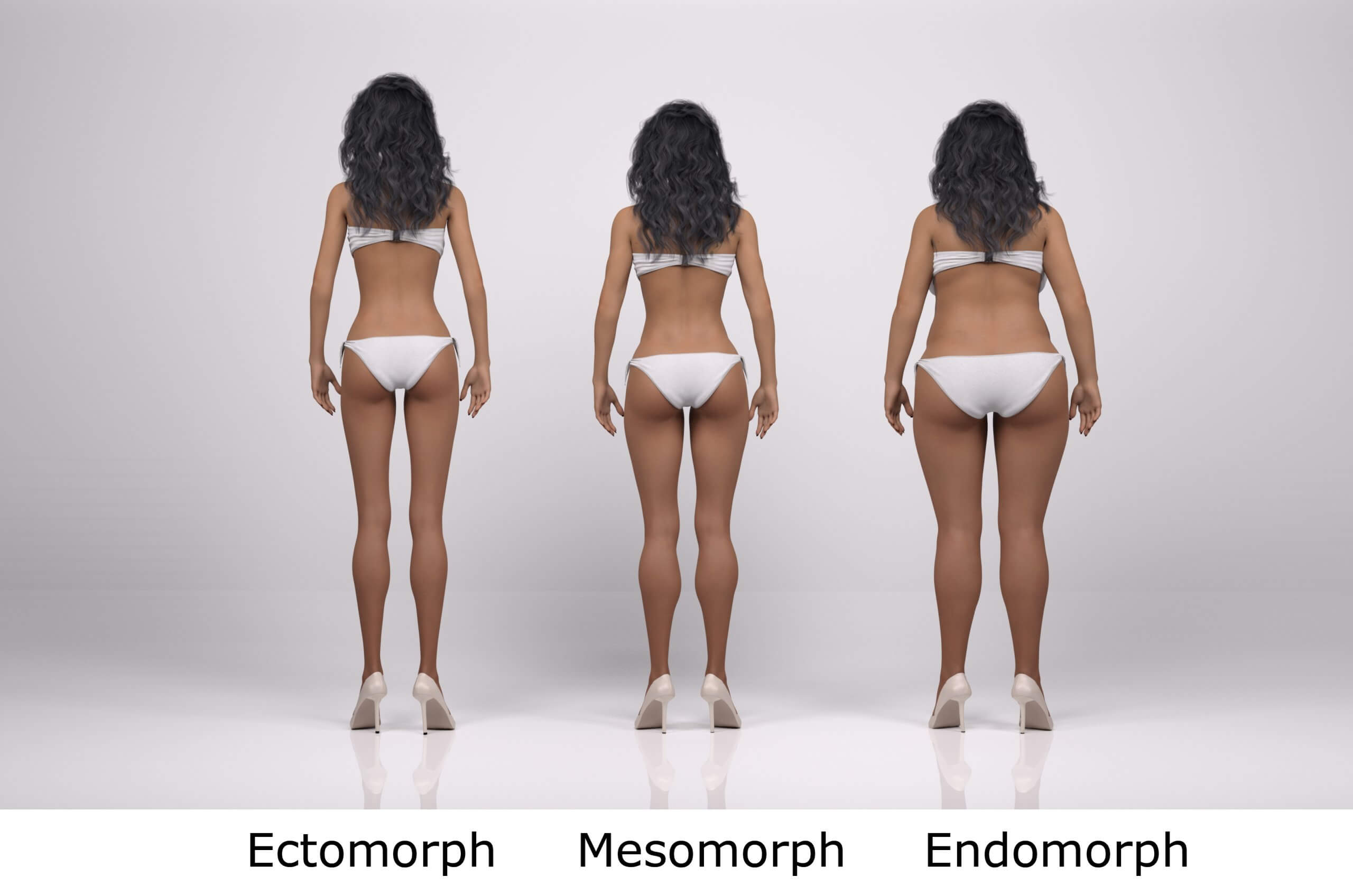 Somatotyping provides the quantitative description of the human physique. The most widely used somatotype method was introduced by Heath & Carter; it is expressed in three components (endomorphy, mesomorphy, and ectomorphy) that empirically define different aspects of the body composition: degree of fatness, musculoskeletal development, and the linearity of the body. (1) 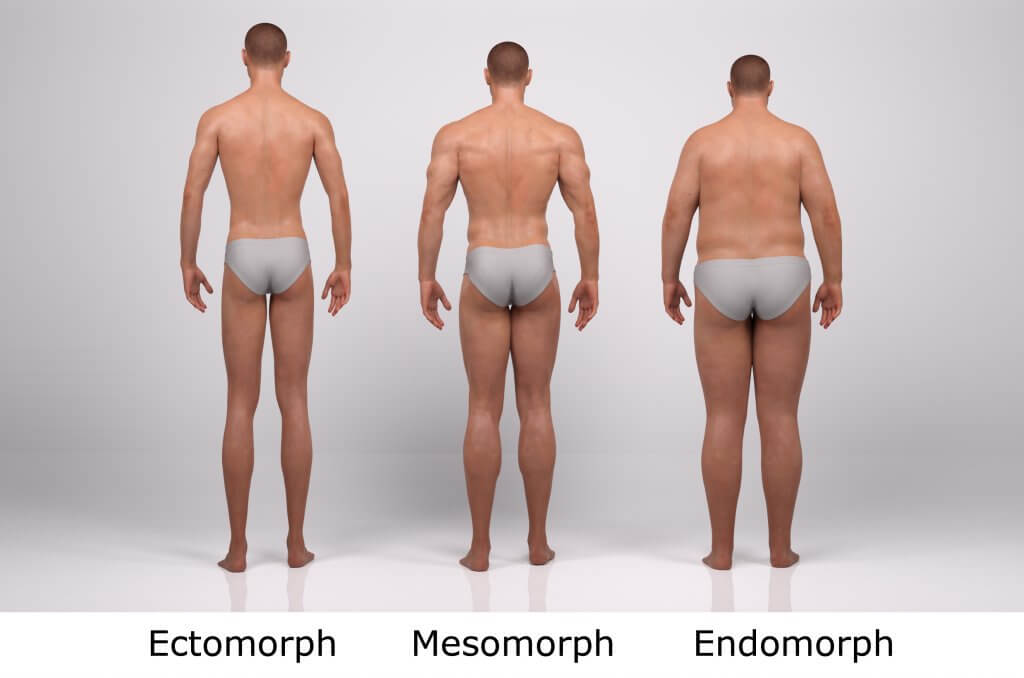 Each individual is a unique combination of all the above three components in different proportions. Endomorphy, mesomorphy, and ectomorphy correspond with the three primary germ cell layers that give rise to the specific sets of tissues that define body composition. (1)

MESOMORPHY-relative display of muscle, bone & connective tissue. Heavy muscled & have large prominent bones. The distal arms & legs are prominent & massive. The shoulders project laterally from the torso. The thoracic segment of the trunk is larger than the abdominal segment. The waist is low. (10)

ENDOMORPHY-relative predominance of roundness & softness of the body. Tendency to be fat, heavy torso with protruding abdomen & slightly smaller thorax. Smooth contours caused by fat accumulation under the skin hide muscle definition. The neck is short, the head is large & spherical, limbs are short with tapering & rounding of the thighs & upper arms. Some breast development in males (fat deposits). Buttocks are full & found (no lateral dimpling). (10)

While studying the relationship between body structure and obesity, another study pointed out that individuals with a dominating mesomorphic component have a genetically determined low metabolism and, therefore, more often become obese. (2)

The stated excess of energy in men, as well as in women, is due to fat consumption (Table 3). The recommended average daily quantity of energy obtained from fats is no more than 30%, whereas, among the men we studied, it varied from 34.8% to 37.7%. Fat-excess nutrition was even more pronounced among females—from 39.8% to 41.5%. Results of this study prove that males and females from the three most common somatotypes—mesomorphic endomorphs, mesomorph-endomorphs, and endomorphic mesomorphs—have a imbalanced and irrational diet are the most susceptible to obesity. (2)

The mean somatotype of diabetic females aged 40-60 years is mesomorph-endomorph. Endomorphy and mesomorphy dominate clearly, and ectomorphy significantly lags behind. (4)

In another study, both age groups of male diabetics presented with endomorphic mesomorph somatotype. Mesomorphy was the highest, followed by endomorphy. Ectomorphy lagged substantially behind, leading to a shift in the somatotype upward to mesomorphy and leftward to endomorphy. Unlike the findings of studies in foreign countries presenting markedly dominating endomorphy, in our study Bulgarian diabetic males presented with dominating mesomorphy. (5)

One study involving 635 practically healthy male subjects aged 20-60 years investigated the relationship between the somatotypes and some risk factors for ischemic heart disease (IHD). The subjects lying outside a typical somatotype showed the greatest predisposition for developing IHD followed by the endomorphic and mesomorphic groups. The risk for IHD in the ectomorphic group was negligible. Arterial hypertension was found in 48% of the subjects having the type lying outside the typological diagram, 31% in the endomorphic and mesomorphic groups. None of the ectomorphic subjects had elevated arterial pressure. Increased risk due to high cholesterol levels was established in the subjects outside the diagram-56.6%, while in the remaining groups it was 46%. The mean levels of triglycerides and low-density lipoproteins had critical values in the subjects outside the typological diagram while the high-density lipoprotein levels were the most elevated in the subjects of ectomorphic. (6)

In one study, mice with low microbiota developed the microbiota and somatotype of their human donors. Obese mice resulted in the acquisition of the microbiota of lean animals, but there was no corresponding acquisition of the obese microbiome or somatotype by lean mice. Obese mice fed a low saturated fat, high fruit and vegetable diet demonstrated greater invasion of the Lean microbiota. In addition, all mice on this diet with the lean microbiome gained less fat mass, compared to mice fed a high saturated fat, low fruit, and vegetable diet. (7)

Therefore Somatotype can potentially be altered by adjusting the gut microbiome.

Serum lipid (Blood fat) profiles of 76 men of young age (17-21 years) were investigated and determination of somatotypes was realized. The investigation was conducted on an empty stomach and after one hour after food loads (test meal with energy value of 419 kcal, content of proteins – 17,9 g, fats – 11,9 g, carbohydrates – 60,1 g). Regularities inherent to certain somatotypes were revealed. (8)

In young men with the abdominal Endomorph somatotype (with the most pronounced fat component), changes evidencing membrane rigidity growth were revealed: cholesterol esterification processes inhibition. In young men with muscular Mesomorph somatotype, the highest level of phosphatidylcholine and the lowest level of easily-oxidized phospholipid fractions in comparison to other somatotypes [thoracic (p = 0.044), abdominal (p = 0.037) and undetermined (p = 0.021)] were registered. General rule is lowering of the free fatty acids levels after meal in comparison with the indices on the empty stomach for all somatotypes: thoracic (p = 0.0001), muscular (p = 0.012), abdominal (p = 0.041) and undetermined (p = 000018). (8) 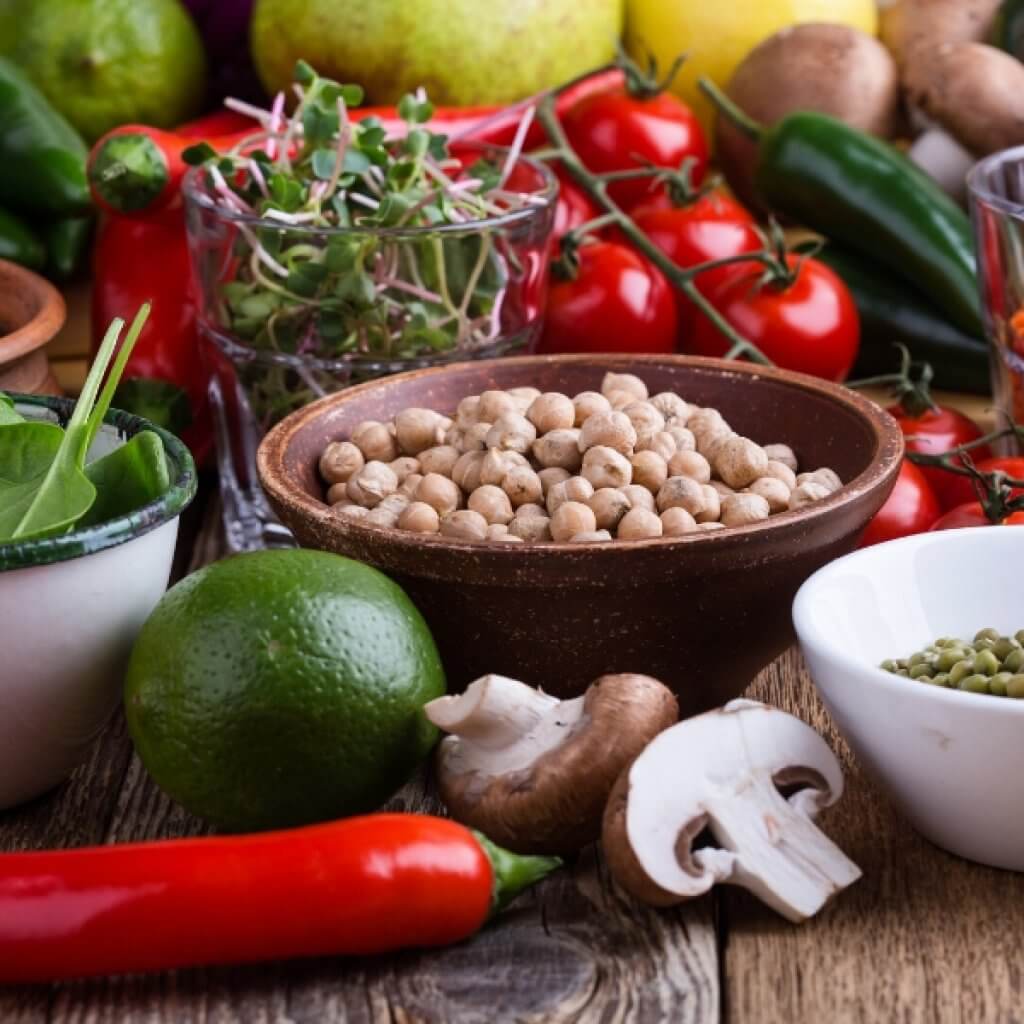 Eating for your Somatotype

Ectomorph
They tend to be thyroid and SNS dominant with either a higher output or higher sensitivity to catecholamines like epinephrine and norepinephrine. This profile is linked to a fast metabolic rate and a high carbohydrate tolerance.

This group generally does best with more carbohydrates in the diet, along with a moderate protein and lower fat intake. A nutrient distribution for this body type might be around 55% carbs, 25% protein, and 20% fat. (10)

Mesomorphs tend to be testosterone and growth hormone dominant. This profile leads to a predisposition for muscle gain and the maintenance of lower body fat.

Mesomorphs typically do best on a mixed diet, consisting of balanced carbohydrates, proteins, and fats. A macronutrient split of 40% carbohydrate, 30% protein, and 30% fat can work well. (10)

They tend to be naturally less active. Where the ectomorphs tend to burn off excess calories with near-constant movement, excess calories in endomorphs do not seem to cause that same increase in expenditure. This means that excess calories are more likely to be stored as fat. This profile leads to a greater propensity for energy storage, including both lean mass and fat mass. This can also mean a lower carbohydrate tolerance.

A nutrient distribution for this body type might be around 25% carbs, 35% protein, and 40% fat. Again, no math gymnastics. Just think higher fats and protein, lower carbs. (10)

In saying all of the above, there is no hard and fast rule. As you will have noticed these are 3 strong types, but there are in fact a thousand variations and crossovers between these types.

It has also been shown that types can change depending on diet and gut microbiome, so you can push yourself in one direction or another depending on diet. The one thing you really can’t change is your frame or skeleton.

As for diet, I would suggest going unprocessed with your food and aim for a plant-based approach where you can.

(6) Relationship between somatotype and some risk factors for ischemic heart disease. PUBMED https://www.ncbi.nlm.nih.gov/pubmed/8979451