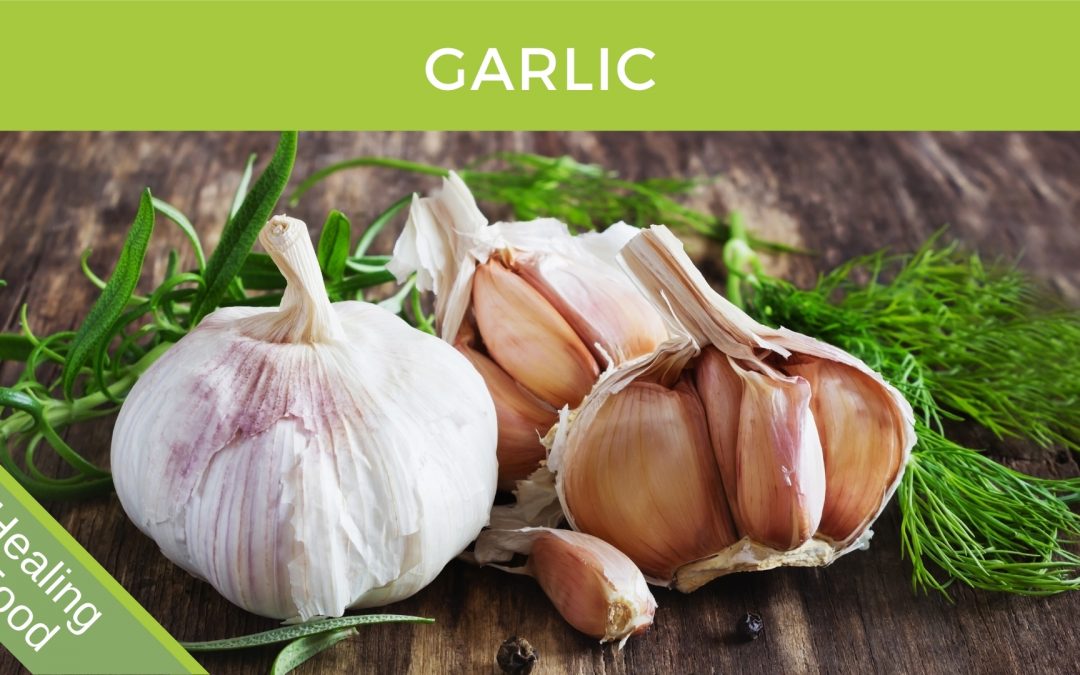 Yes everybody knows about Garlic as a flavouring in food. It’s one of the commonly used culinary herbs on the planet.

Garlic is also very popular in health products for its immune and cardiovascular benefits, but you can get many of those benefits at home by simply increasing the quantity used.

Garlic (Allium sativum L.) has acquired a reputation in different traditions as a prophylactic as well as a therapeutic medicinal plant. Garlic has played important dietary and medicinal roles throughout the history. Some of the earliest references to this medicinal plant were found in Avesta, a collection of Zoroastrian holy writings that was probably compiled during the sixth century BC (2)

Approximately 100 organosulfur compounds have been identified in garlic EO from Allium sativum, with diallyl sulfide, diallyl disulfide, allyl methyl sulfide, and diallyl trisulfide as the principal compounds. Novel sulfides called garlicnins have also been isolated from Allium sativum L. and were shown to modulate macrophage activity. (8)

Garlic and its preparations have been widely recognized as agents for prevention and treatment of cardiovascular diseases. The wealth of scientific literature supports the proposal that Garlic consumption has significant effects on lowering blood pressure, prevention of atherosclerosis, reduction of serum cholesterol and triglyceride, inhibition of platelet aggregation, and increasing fibrinolytic activity. Both experimental and clinical studies on different Garlic preparations demonstrate these favorable cardiovascular effects. (2)

Long-term application of Garlic and its preparations on experimental atherosclerosis induced by a high cholesterol diet, showed 50% reduction in atheromatous lesions, particularly in the aorta. Most of the human studies on lipid-lowering effects of Garlic and Garlic preparations described a significant decrease in serum cholesterol and triglyceride. (2)

The medicinal effects of garlic have been well documented, and natural garlic products have been shown to have antimycobacterial activity which is effective against tuberculosis. (5).

Experimental results indicate that Garlic appears to enhance the functioning of the immune system by stimulating certain cell types, such as macrophages, lymphocytes, natural killer cells, dendritic cells, and eosinophils by mechanisms including modulation of cytokine secretion, immunoglobulin production, phagocytosis, and macrophage activation. Garlic has also been shown to modulate/regulate immune activity (1)

Data from one study where participants were taking only 5g of raw crushed garlic daily indicated that the bioactivity of garlic is multifaceted and includes activation of 7 genes related to immunity and metabolism in humans. (7)

Immune system cells called Neutrophils are a type of phagocyte and are normally found in the bloodstream. During the beginning (acute) phase of inflammation, particularly as a result of bacterial infection, environmental exposure, and some cancers, neutrophils are one of the first-responders of inflammatory cells to migrate towards the site of inflammation. Results of one study demonstrate that certain organosulfur compounds can activate neutrophil functional activity and may serve as biological response modifiers by augmenting phagocyte functions. (8)

A vaginal cream containing garlic and thyme was tested and was as effective as much as Clotrimazole vaginal cream (Canesten) for the treatment of candida vaginitis. (3)

Numerous publications have introduced allicin as an effective molecule against infectious agents and this fact has been repeatedly confirmed. Based on reports, bactericidal activity of allicin has been verified against important pathogens, including Enterococcus spp, Bacillus spp, Helicobacter pylori, Escherichia coli, Staphylococcus aureus, Salmonella typhimurium, and Vibrio cholera, as well as methicillin-resistant Staphylococcus aureus strains. (6)

Findings demonstrate the effect of allicin (from Garlic) on adult helminth worms and indicate that most of the changes occur at high concentrations. (4)

Several studies suggest that garlic because of containing the sulfur compounds like allicin can delay and prevent the growth of parasites such as Leishmania major, Crithidia fasciculata, Leptomonas colosoma, Giardia lamblia, Tetratrichomonas gallinarum, Cryptosporidium baileyi, Plasmodium berghei, Histomonas meleagridis, and Trypanosoma spp (6)
I recommend swallowing up to six whole cloves daily for 14 days.

Several studies have been conducted to determine the chemopreventive and anticarcinogenic role of garlic’s main component since the in vitro and in vivo studies of Weisberger and Pensky, which showed garlic thiosulfinate inhibit the tumor cell growth. (6)

Garlic components have been found to block covalent binding of carcinogens to DNA, enhance degradation of carcinogens, have anti-oxidative and free radical scavenging properties, and regulate cell proliferation, apoptosis, and immune responses. Ajoene, a garlic stable oil soluble sulfur-rich compound and garlic-derived natural compound, have been shown to induce apoptosis in leukemic cells. (2) 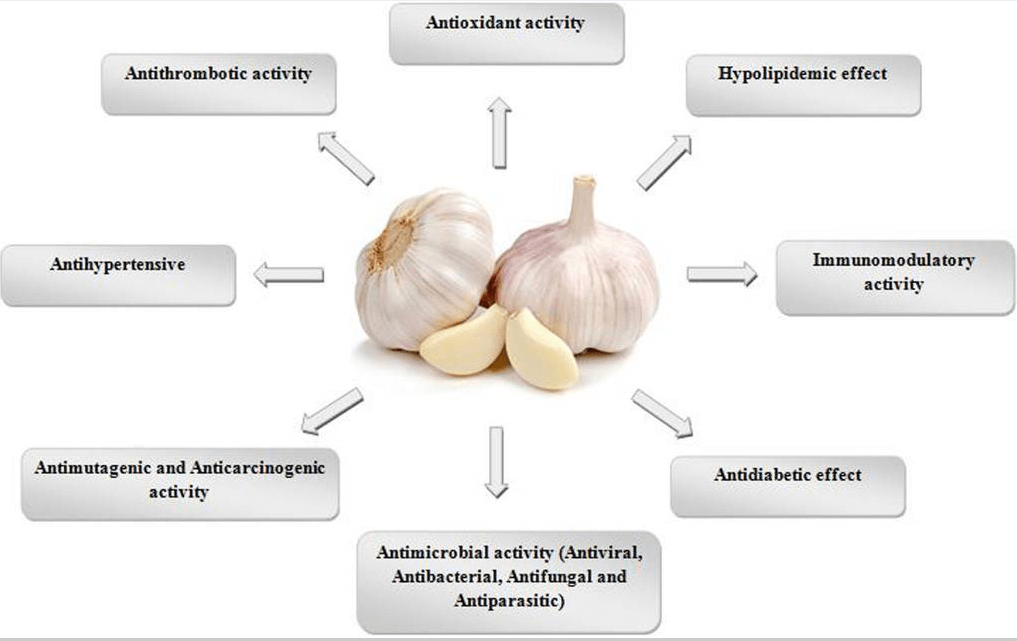 The Health Beneifts of Garlic explained

Incorporating Garlic into your detox diet as often as possible will add yet another therapeutic food to your program. I recommend using upwards of six cloves in each meal per person. I often use an entire bulb roughly chopped and not overcooked. If you leave a little crunch in your Garlic you will retain the sulfur compounds which are important for immune activity.

Garlic can be used in many ways to enhance your health. Long-term use in food and cooking can contribute to cardiovascular health, whereas short-term use of raw garlic is great for the common cough and cold. One of my favourite remedies is the 6 clove swallow. At the very first appearance of a sore throat, cough or cold, get six medium sized cloves of garlic, peel them and swallow them whole with a glass of juice or milk. Repeat this process morning and night for 24-48 hours and often the cold will never get established and simply disappear without a trace. 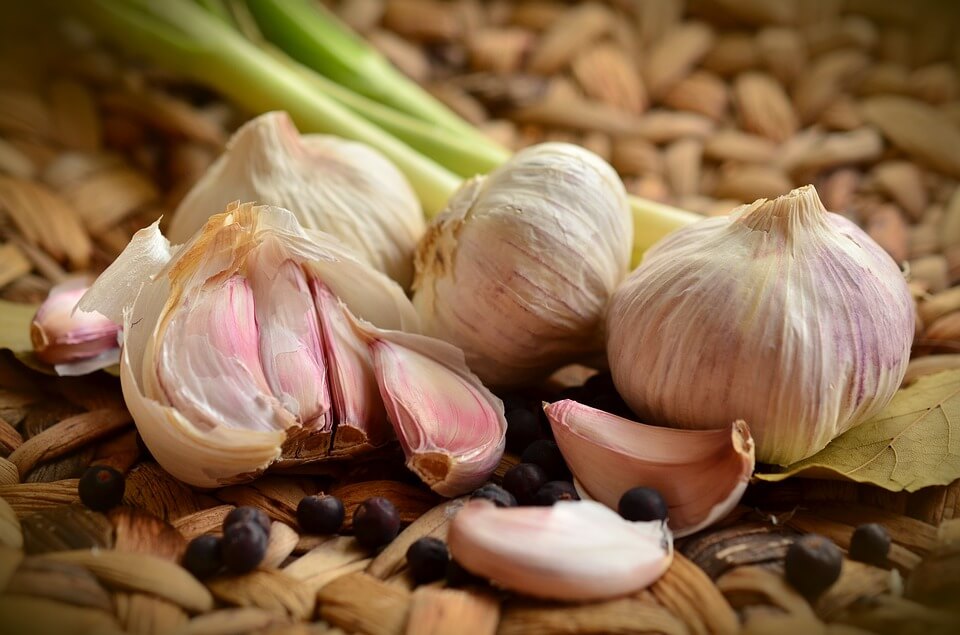 The health benefits of garlic

(3) Investigating the therapeutic effect of a vaginal cream containing garlic and thyme compared to clotrimazole cream for the treatment of mycotic vaginitis. PUBMED https://www.ncbi.nlm.nih.gov/pmc/articles/PMC3208935/

(4) Ultrastructural study on the morphological changes to male worms of Schistosoma mansoni after in vitro exposure to allicin. PUBMED https://www.ncbi.nlm.nih.gov/pubmed/21537796