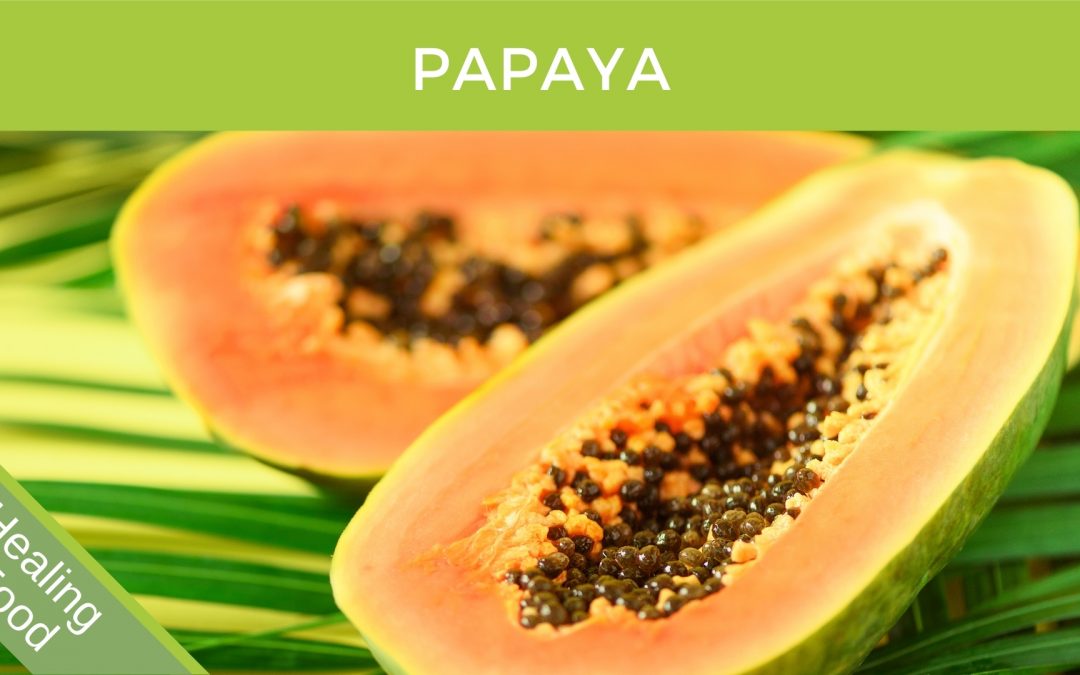 The papaya, papaw, or pawpaw is the plant Carica papaya, one of the 22 accepted species in the genus Carica of the family Caricaceae. It is native to the tropics of the Americas, perhaps from southern Mexico and neighboring Central America. (2)

Papain from Papaya belongs to a family of related proteins with a wide variety of activities, including endopeptidases, aminopeptidases, dipeptidyl peptidases and enzymes with both exo- and endopeptidase activity. (1)

A meat tenderizing proteolytic enzyme Papain is obtained from papaya (Carica papaya) and is commonly used in the meat processing industry. (9) 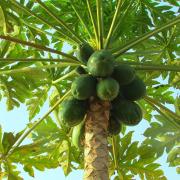 In the 19th Century professor Finkler, who occupied the chair of physiology at the University of Bonn, and who for a few years had been experimenting with the digestive ferments found Papain of considerable use. (3)

The properties of Papain as determined by Professor Finkler include:

1. It digests equally in acid, alkaline, or neutral fluids, best of all in water.
2. It will dissolve 1,000 times its own weight of fresh blood-fibrin.
3. It’s action is increased by the presence of pepsin and pancreatin.
4. It acts at the temperature of the body.
5. Meat infused with a solution of papain keeps while undergoing a softening process, much longer than it does without it. From this, it can be inferred that it has an antiseptic as well as a peptonizing action.
6. The product of its action is a pepton, which, from its properties, may be taken to be Meissner’s c pepton.
7. Papain adheres to albumen to such a degree as to prevent its being removed by protracted washing with water.
8. Papain, in contrast to pepsin, acts when the resulting pepton-solution is highly concentrated.
9. The addition of antiseptics, such as salicylic or carbolic acids, does not interfere with its action. (3)

One study indicated that the purified proteinases were more efficacious than the proteinases, including papain. The efficacy and mode of action make plant cysteine proteinases potential candidates for a novel class of anthelmintics urgently required for the treatment of humans and domestic livestock. (5)

Papain solutions decreased the weight of burn crust in vitro and accelerated experimental burn healing in vivo. Under clinical conditions, papain produced a therapeutic effect in patients with inflammatory disorders in genitals, intestine, liver, and eye. (7)

The pulp of the papaya fruit is mashed and applied daily to full thickness and infected burns. It appears to be effective in desloughing necrotic tissue, preventing burn wound infection, and providing a granulating wound suitable for the application of a split thickness skin graft. Possible mechanisms of action include the activity of proteolytic enzymes chymopapain and papain, as well as an antimicrobial activity. (8)

The dry leaves were prepared to a fine texture form using a grinder. 50 g of the powder was placed into 1000 mL flask. Water was added on a hotplate for 3 h. After being left to cool mixture was filtered with filter paper, the filtrate was rotor evaporated to remove the water. The Aqueous extract was then freeze-dried to produce a powder. (14)

Diabetic wound healing: Unripe fruits of Carica papaya were cleaned with distilled water and the outer green thin layers were peeled and discarded. The underlying epicarp (200 g) was blended with 50 mL of distilled water to a fine texture form using a blender. The mixture was then filtered using a fine muslin cloth followed by rotor evaporation to remove water. Then the filtrate was oven-dried at 40oC and the obtained extract was used in the study. (16)

The leaves were air dried and reduced to powder form using pestle and mortar. 400 g of the prepared powder was extracted with 2L ethanol using cold maceration method. The mixture was then filtered and evaporated at 50°C in a water bath to obtain 27. 2 g of semi solid extract. The extract was stored at 4°C and prepared later for oral administration. (15)

Gastric Ulcer
The latex of the unripened fruit of papaya was effective in protecting the exogenous ulcer. The conclusion is that papain is the active principle in papaya that exerts the ulcer-protective effect. (13)

It’s value in supporting the health of the digestive system and healing while easing the process of digestion gives cause to use Papain in a digestive context.

It plays an important role as a enzyme supplement.

You can find Papain in the following products:

(5) Assessment of the anthelmintic effect of natural plant cysteine proteinases against the gastrointestinal nematode, Heligmosomoides polygyrus, in vitro. PUBMED https://www.ncbi.nlm.nih.gov/pubmed/15727070

(7) [Pharmacological study of papain from the papaya plant cultivated in Uzbekistan]. PUBMED https://www.ncbi.nlm.nih.gov/pubmed/10934598

(9) Determination of papain in raw meat by immunoassay. PUBMED https://www.ncbi.nlm.nih.gov/pubmed/22060266

(11) Characterization of papaya peptidase A as an enzyme of extreme basicity. PUBMED https://www.ncbi.nlm.nih.gov/pubmed/6362305

(12) Isolation of highly active papaya peptidases A and B from commercial chymopapain. PUBMED https://www.ncbi.nlm.nih.gov/pubmed/7018581