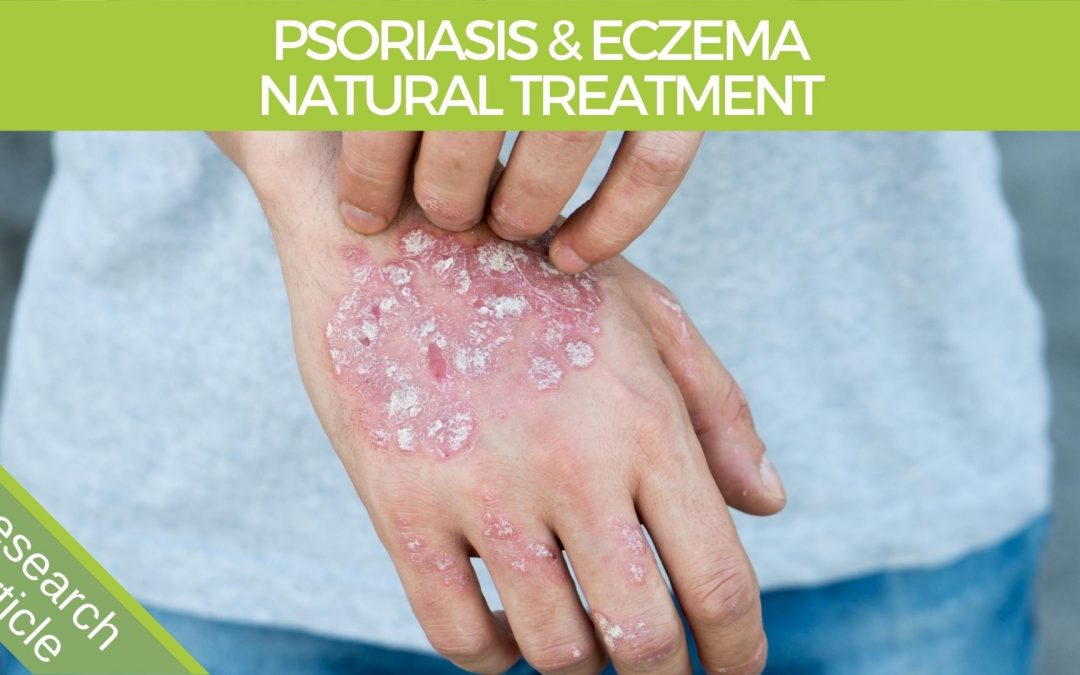 Psoriasis is one of the most upsetting and difficult skin conditions experienced and there is no known cure according to modern medicine.

Herbal medicine, however, takes a different view. Given the right conditions, the body has the ability to heal.

In this article, we will take a look at the symptoms, causes, and natural treatments including the Herbal Detox program or BodiClenz program.

Psoriasis occurs when skin cells quickly rise from their origin below the surface of the skin and pile up on the surface before they have a chance to mature. Usually, this movement (also called turnover) takes about a month but in psoriasis, it may occur in only a few days. (2)

In its typical form, psoriasis results in patches of thick, red (inflamed) skin covered with silvery scales. These patches, which are sometimes referred to as plaques, usually itch or feel sore. They most often occur on the elbows, knees, other parts of the legs, scalp, lower back, face, palms, and soles of the feet but they can occur on skin anywhere on the body.

Psoriasis is a skin disorder driven by the immune system, especially involving a type of white blood cell called a T cell. Normally, T cells help protect the body against infection and disease. In the case of psoriasis, T cells are put into action by mistake and become so active that they trigger other immune responses, which lead to inflammation and to a rapid turnover of skin cells. (2)

There have been genetic links found, as with almost all health conditions, but the question really still is, why does it happen? 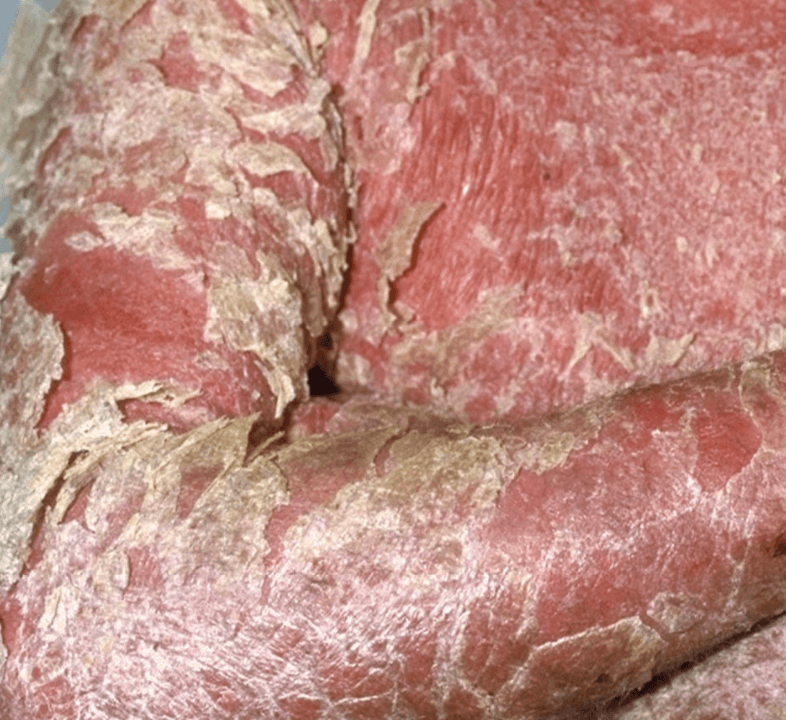 The Liver connection to Psoriasis

The hepato-biliary (Liver) system is one of the main target organs in the systemic psoriatic process. Non-alcoholic fatty liver disease and chronic cholecystitis are predictors of psoriatic disease progression. (1)

Some indicators predictors of psoriasis which have been identified include:

These all point to liver function as a major contributing factor in the appearance and progression on psoriasis.

Pharmaceutical drugs are toxic to the liver. In one study among 393 patients, 24% and 0.8% developed liver enzyme abnormalities and cirrhosis, respectively. The most common factors associated with pathological liver enzymes were drugs (57%) and non-alcoholic fatty liver disease (22%). (11)

It is known that obesity can compromise the effectiveness of systemic treatments for psoriasis. Dermatologists are also expected to promote a healthy lifestyle and weight loss for obese patients because they could improve metabolic parameters and responsiveness to psoriasis therapies. (3)

Research has suggested that psoriasis patients may be at greater risk of cardiovascular problems, especially if the psoriasis is severe, as well as obesity, high blood pressure, and diabetes. (2)

Psoriasis patients have been shown to have a higher prevalence of other autoimmune diseases including celiac disease, a condition marked by sensitivity to dietary gluten. A number of studies suggest that psoriasis and celiac disease share common genetic and inflammatory pathways. (5)

Epidemiological and clinical studies suggest there is an association between psoriasis, celiac disease, and celiac disease markers. There is early evidence to suggest that a gluten-free diet may benefit some psoriasis patients. (5)

These may be combined for an improved outcome but as yet no cure has been discovered.

It is known that diet can affect weight, liver function and cardiovascular health, being the potential causes mentioned above, therefore it could be stated that diet is an important factor in the pathogenesis of psoriasis.

The prevalence and severity of psoriasis decrease during fasting. Low-calorie diets lead to relief of symptoms and might be important adjuvant factors in prevention and treatment of moderate non-pustular psoriasis. (6) 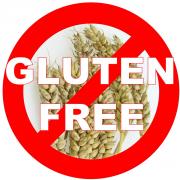 Regarding a gluten-free diet, it is known that it may improve the skin lesions even in Celiac disease patients. (6)

Despite inconsistent results, intake of fish rich in omega-3 is recommended. In patients with acute psoriasis, parenteral infusions of omega-3 might be beneficial. (6)

Psoriatic arthritis can be associated with both psoriasis and Inflammatory Bowel Disease, suggesting an etiologic overlap between the joint inflammation and both gut and skin pathology in which the microbiota may be the common mediator. (13) A good course of broad-spectrum probiotics will be helpful with Psoriasis.

Eat more of these foods

Herbal medicines are very effective in reducing Fatty Liver and related inflammation. These herbs include:

By the end of one study, the Aloe Vera extract cream had cured 25/30 patients (83.3%) compared to the placebo cure rate of 2/30 (6.6%) resulting in significant clearing of the psoriatic plaques. Therefore, Aloe Vera can be considered a safe and alternative treatment to cure patients suffering from psoriasis. (14)

Different pharmacological experiments in a number of in vitro and in vivo models have convincingly demonstrated the abilities of rhein found in Turkish Rhubarb to exhibit hepatoprotective, nephroprotective, anti-inflammatory, antioxidant, anticancer, and antimicrobial activities, lending support to the rationale behind several of its potential medicinal uses. (8)

The major active constituent in Goldenseal berberine inhibits oxidative stress and inflammation in a variety of tissues including liver, adipose tissue, kidney, and pancreas. (9)

Results of one study indicate that silymarin seems to be effective in reducing the biochemical and ultrasonographic changes induced by fatty liver disease. A pilot study performed in patients with fatty liver disease confirmed an improvement in liver enzymes and insulin resistance. (10)

One study of five psoriasis cases, ranging from mild to severe at the study onset, improved on all measured outcomes over a six-month period when measured by the Psoriasis Area and Severity Index. Saffron tea and slippery elm bark water were consumed daily. (12)

The Ultimate Herbal DETOX program and BodiClenz program use all of the herbs mentioned above, an effective liver detox plus fasting on a vegetarian, gluten-free diet along with a thorough colon cleansing program.

It has been shown to reduce and sometimes eliminate psoriasis, especially when used regularly over 2-3 years. I would suggest completing the program every 3-6 months until you have eliminated the psoriasis completely.

The Herbal Detox program or BodiClenz program will encourage incremental changes in diet while improving liver health and reducing inflammation. The diet is gluten-free, involves fasting on fruits and vegetables and uses high doses of the herbs in capsules.

You may see reductions within the first two weeks but persistence will be required.

If you have success then please share your story on this page below.

I hope this article has been helpful

(2) Questions and Answers about Psoriasis. http://www.niams.nih.gov/Health_Info/Psoriasis/

(9) Antioxidant and anti-inflammatory activities of berberine in the treatment of diabetes mellitus. PubMed http://www.ncbi.nlm.nih.gov/pubmed/24669227