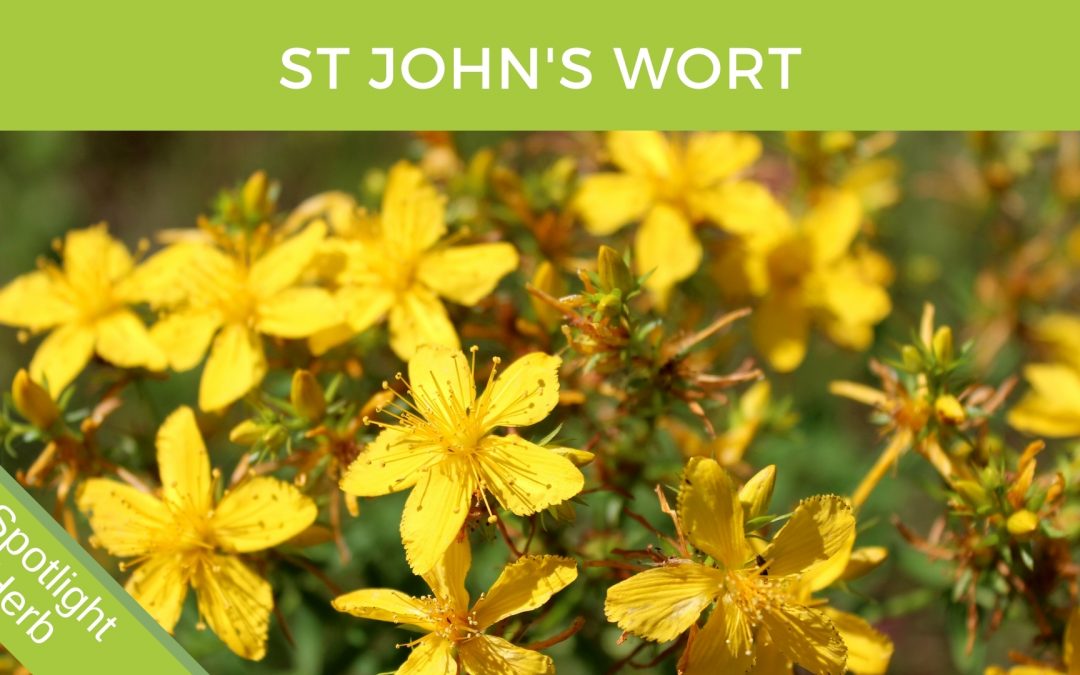 Perforate St John’s wort is a herbaceous perennial plant with extensive, creeping rhizomes. Its reddish stems are erect and branched in the upper section, and can grow up to 1 m (3 ft 3 in) high. The flowers appear in broad helicoid cymes at the ends of the upper branches, between late spring and early to mid summer. The cymes are leafy and bear many flowers. The pointed sepals have black glandular dots. The many stamens are united at the base into three bundles. (3)

Its leaves are characterized by the presence of oil glands which may be seen upon holding the leaf to light, giving the impression of a perforated look, to which is attributed the name of the plant. The flowers, are bright yellow-orange, while the calyx and corolla are marked with numerous black glandular dots. When the black dots are rubbed between the fingers, the fingers become red. (4)

Traditional Use of St John’s wort

Hypericum perforatum, also known as St. John’s wort, hypericum or millepertuis is a member of the family Hypericaceae and a herbaceous perennial plant native Europe, western Asia, and northern Africa. Nowadays it has a worldwide distribution. The crude drug, called herba hyperici, consists of the upper aerial parts of the plant collected just before or during the flowering period (2)

Hypericum perforatum has been used as a medicinal plant for centuries, for the treatment of external and internal disorders. Externally, oily preparations of the plant may be applied to treat minor burns, wounds, skin inflammation, and nerve pain. Internally, it is indicated for the treatment of anxiety and mild to moderately severe depression competing for status as a standard antidepressant therapy and being the only herbal alternative to synthetic antidepressants. (2)

The SJW has been considered a medicinally valuable plant for over 2000 years. The Greek physicians of the first century, Galen, Dioscorides, Pliny, and Hippocrates, recommended SJW as a diuretic, wound-healing herb, treatment for menstrual disorders, and cure for intestinal worms and snakebites. Dried flowering tops placed in olive oil caused the oil to turn red after 3 weeks. The ancients believed the plant had mystical qualities, and plants were collected for protection from demons and to drive away evil spirits. In fact, the generic name Hypericum originated from the Greek name for the plant, hyperikon. Literally translated, the name is an amalgamation of the root words “hyper” (meaning over) and “eikon” (meaning image or apparition), referring to the plant’s supposed ability to ward off evil spirits. Early Christians also believed the plant had mystical properties. According to one legend, the greatest effect was obtained when the plant was harvested on Saint John’s Day (June 24), which is often the time of peak blooming. Another legend holds that the plant released its blood-red oil on August 29, the day of St. John’s beheading. (5)

The plant enjoyed continued use as an herbal remedy in the Middle Ages. Sixteenth-century herbalists including Paracelsus, Gerard, and Culpeper all recommended SJW preparations to treat wounds and alleviate pain. In 1525, Paracelsus recommended it for treating depression, melancholy, and over-excitation. The SJW’s use as a medicinal herb continued in Europe, spreading to other continents, between the eighteenth and nineteenth centuries. It was commonly made into teas and tinctures for treatment of anxiety, depression, insomnia, water retention, and gastritis. Over the years, vegetable oil preparations have been used for treatment of hemorrhoids and inflammation. Others have used SJW extracts to treat sores, cuts, minor burns, and abrasions, especially those involving nerve damage. (5) 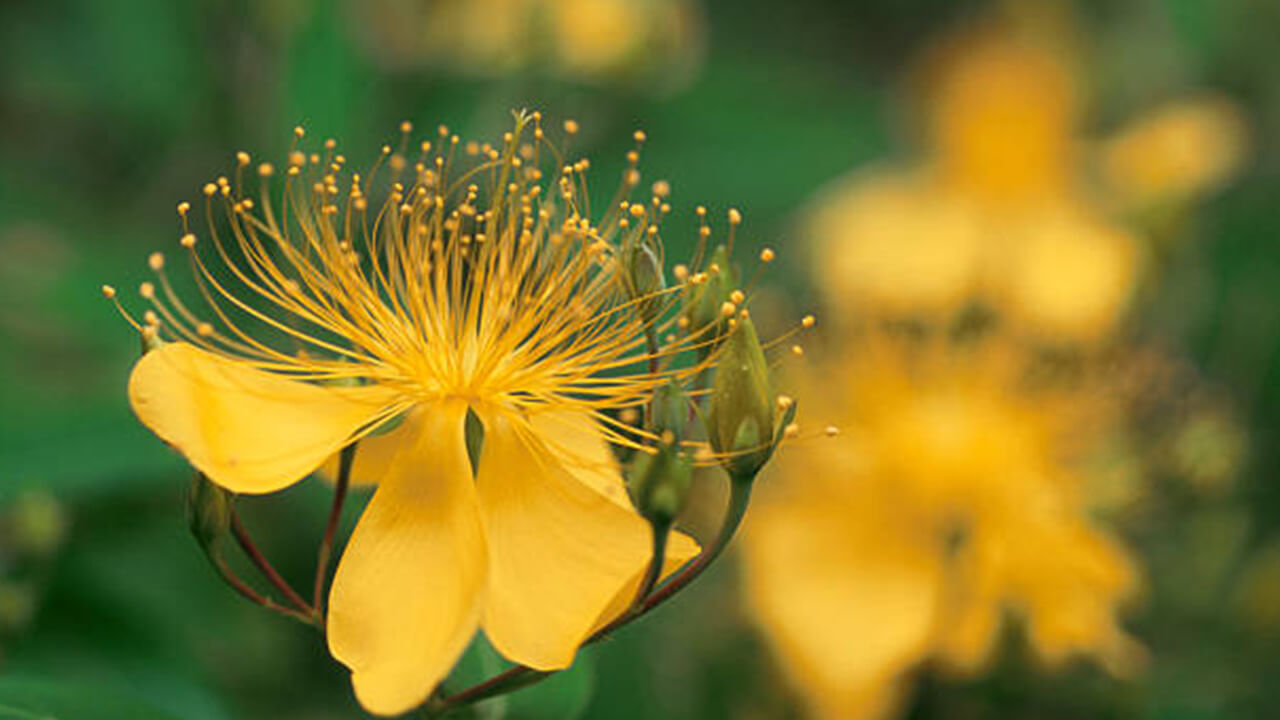 Hypericin and pseudohypericin were first isolated from Hypericum perforatum L., which is the most important and commercially recognized representative of the genus. (4)

Hypericum perforatum contains several classes of biologically active compounds. These constituents often vary in its concentration, due to genetic variation within the species and/or adulteration, ecological factors, time of harvesting, preparation and processing of sample material and storage conditions, such as exposure to light, time of harvesting. Important bioactive components are concentrated in buds, blossoms, and tips of twigs. Despite this variation, it is known that around 20% of the plant extract is comprised of bioactive compounds. (2)

Chemical investigations into the constituents of H. perforatum have detected seven groups of medicinally active compounds. The most common classes include naphthodianthrones, phloroglucinols, and flavonoids (such as phenylpropanes, flavonol glycosides, and biflavones), as well as essential oils. Two major active constituents have been identified: hypericin and hyperforin. (5)

Other compounds of various classes have been identified in H. perforatum. These include tannins (ranging from 3% to 16%), xanthones (1.28 mg/100 g), phenolic compounds (caffeic acid, chlorogenic acid, and p-coumaric acid), and hyperfolin. Additional compounds include, to a lesser extent, acids (nicotinic, myristic, palmitic, and stearic), carotenoids, choline, pectin, hydrocarbons, and long-chain alcohols. Several amino acids that have been isolated from the herb include cysteine, glutamine, leucine, lysine, and GABA (γ-aminobutyric acid). (5)

Oxidative stress, which the brain is particularly susceptible to, plays an important role in the development of neurodegenerative diseases, such as Alzheimer’s and Parkinson’s disease and stroke.

H. perforatum standardized extract has also been described to have the ability to protect against oxidation in rat brain, cerebral cortex mitochondria. The authors concluded that the extract protected hippocampal HT22 nerve cells from glutamate-induced cytotoxicity by reducing or attenuating glutathione loss, calcium fluxes, energy status, and oxidation-mediated cell death, up to 8 h after glutamate exposure. (2)

Amyloid-β-induced toxicity on neuronal cells is proposed as a main route to neuronal loss in Alzheimer’s disease. One study concluded that H. perforatum alcoholic extract and studied fractions have neuroprotective activity, which can be of relevance on preventing amyloid-β peptide neuronal degeneration. It was also concluded that treatment with H. perforatum ethanolic extract may restore or improve microglial viability, reducing amyloid-β mediated toxicity in Alzheimer’s disease. (2)

Thirty-five studies examining 6993 patients were reviewed. The review concluded that the available evidence suggested that hypericum extracts tested in the included trials are superior to placebo on patients with major depression and are similarly effective as standard antidepressants, and have fewer side effects than standard antidepressants. (1)

Hyperforin is a potent reuptake inhibitor of serotonin, dopamine, noradrenaline, GABA, and L-glutamate from the synaptic cleft. Blocking the reuptake of serotonin (5-HT) from the synaptic cleft alleviates symptoms of depression by allowing the serotonin to bind to 5-HT receptors and elicit a greater response. The mechanism by which hyperforin has been shown to act is therefore different from that used by conventional antidepressants, perhaps pointing the way to a new class of antidepressants. Hyperforin also increases the number of 5-HT receptors, as demonstrated by studies on rat brains, suggesting a possible long-term therapeutic benefit of SJW treatment. (5)

Antidepressive activity was also reported in several flavonoids. Taking all these results in consideration and the fact that the mechanisms underlying depression are still not well understood, it is more likely that H. perforatum’s antidepressant activity is due to a multiplicity of bioactive compounds and not to a single constituent and/or mechanism of action. (2)

Hypericum perforatum also presents antimicrobial properties. Regarding the antibacterial activity, crude plant extracts of the aerial parts of the plant, fractions and isolated compounds have been tested, demonstrating positive results. Concerning specific compounds, hyperforin is reported to present antibacterial activity against Staphylococcus aureus and Gram-positive bacteria, such as Streptococcus pyogenes and Corynebacterium diphtheriae being considered the antibacterial agent of H. perforatum. As for antifungal properties the flavonoids quercitrin, hyperoside, avicularin, rutin, quercetin, and kaempferol were reported to present antifungal activity against Helminthosporium sativum. Another compound extendedly studied, in what concerns its antimicrobial, more specifically, antiviral activity, is hypericin. This naphtodianthrone has demonstrated in vitro antiviral activity against a variety of viruses. (2)

Besides its antiviral properties, hypericin has aroused interest in the scientific community for its antitumoral activity. Since hypericin is probably the most powerful photosensitizer found in nature and for its specific properties, such as a strong absorption at longer wavelength, minimal dark toxicity, certain tumor selectivity and much higher clearance rate from the host body than hematoporphyrins, its potential for antitumoral photodynamic therapy has been explored in several studies. (2)

As an anticancer agent, hypericin reportedly inhibited the growth of cells derived from a variety of neoplastic tissues, including glioma, neuroblastoma, adenoma, mesothelioma, melanoma, carcinoma, sarcoma, and leukemia. The activity of hypericin is attributed to its photodynamic properties. In the presence of light and oxygen, hypericin acts as a powerful natural photosensitizer, generating superoxide radicals that form peroxide or hydroxyl radicals, or singlet oxygen molecules that kill tumor cells. (5)

As is very commonly found in herbal medicines, there are a plethora of active components, wide ranging benefits and very little, if any, negative side effects or toxicity. This often makes herbal medicines a far better option for chronic conditions, and where long-term treatment may be required.

St John’s wort certainly deserves a place among the great nervous system tonics and could be used in place of anti-depressant drugs as a first option.

The long-term use of St John’s wort may offer a protective and preventative treatment option for those worried about developing degenerative brain diseases such as dementia, Parkinsons’s and Alzheimer’s disease.

A great brain tonic, especially when combined with other synergistic herbs such as Panax GInseng, Bacopa and Ginkgo Biloba.