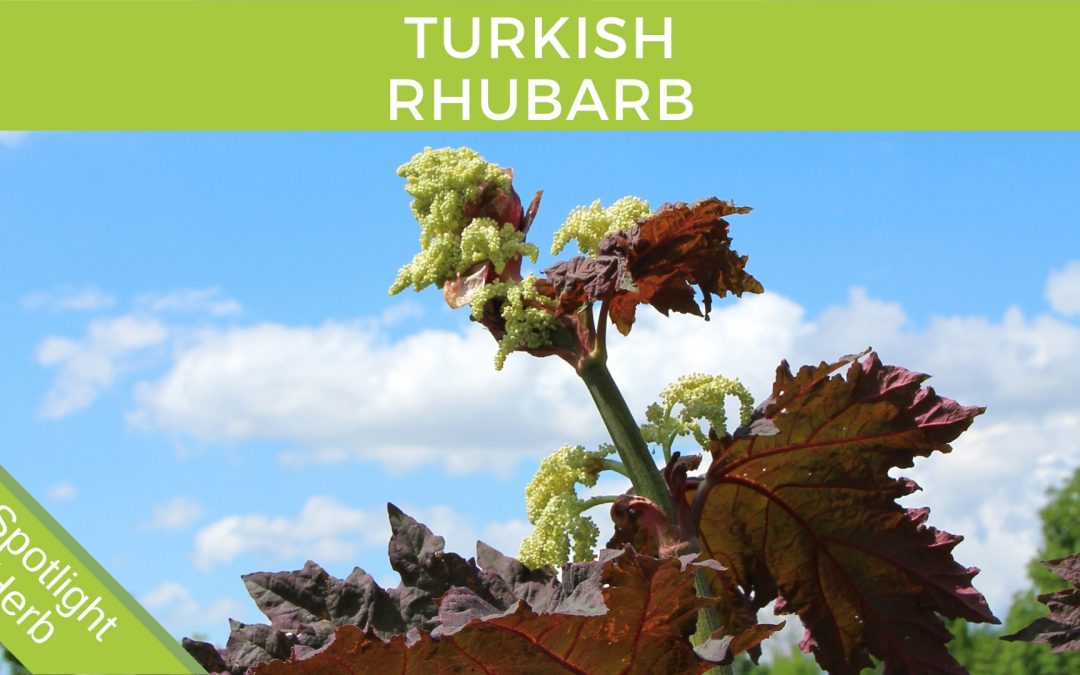 Turkish Rhubarb (Rheum palmatum) is no ordinary rhubarb like your Mum used to cook for dessert but is actually an effective herbal medicine.

Rheum palmatum (RP) is commonly misinterpreted to be one and the same with the familiar Rheum rhabarbarum garden rhubarb which we eat, there are several facets falsifying this assumption.

Size is the most evident of the facets used to differentiate these two closely related species. While most garden species only grow to a mere few feet in height, Chinese rhubarb can produce as high as a six to ten foot jointed stalk with loosely branched clusters of flowers along with the tips that mature red in color from their often yellow or white blooms. (2)

Traditional Uses
Of the numerous herbs renowned for their medicinal benefits in early civilizations, Turkish rhubarb remains one of few still used today in both “conventional and herbal medicine. (4)  The very first accounts are found in ancient Chinese writings, dating back to 2700 B.C. (5)

A study of Chinese history shows that it was known, even back then, for its purging effects, as well as its ability to suppress feverish conditions it was taken by an emperor in the Liang dynasty (557-579) for fever, used as gift-bearing means to an emperor of the Tang dynasty (618-907), used to combat the plague in the years which the Song dynasty ruled (960-1127), and used as a suicidal measure by a general of the Ming dynasty (1368–1644). (2)

Generally, the five anthraquinones, rhein, emodin, aloe-emodin, physcion, and chrysophanol are used as chemical markers for the quality control of rhubarb products (12)

Emodin, aloe-emodin, and rhein are major compounds in rhubarb (Rheum palmatum L.), used in Chinese herbal medicine, and found to have antitumor properties including cell cycle arrest and apoptosis in many human cancer cells. (11)

We will talk mainly about Emodin and Rhein in this text.

Emodin
Emodin is traditionally used as a laxative and is found to increase or decrease the contractility of intestinal smooth muscle in low doses and high doses, respectively. (21)

At present, its role in combination chemotherapy with standard drugs to reduce toxicity and to enhance efficacy is pursued vigorously. Its additional inhibitory effects on angiogenic and metastasis regulatory processes make emodin a sensible candidate as a specific blocker of tumor-associated events. (22)

Different pharmacological experiments in a number of in vitro and in vivo models have convincingly demonstrated the abilities of rhein found in Turkish Rhubarb to exhibit hepatoprotective, nephroprotective, anti-inflammatory, antioxidant, anticancer, and antimicrobial activities, lending support to the rationale behind several of its potential medicinal uses. (6)

Pharmacology
Emodin, Aloe-Emodin, and Rhein are widely accepted as anthraquinone-laxatives (23)

Anthraquinones constitute an important class of natural and synthetic compounds with a wide range of applications. Besides their utilization as colorants, anthraquinone derivatives have been used for centuries for medical applications, for example, laxatives and antimicrobial and anti-inflammatory agents. Current therapeutic indications include constipation, arthritis, multiple sclerosis, and cancer. (24)

Rhubarb consists of the dried rhizome of Rheum palmatum Rhubarb contains sennosides A–F with laxative properties, a considerable quantity of tannin. A laxative action without abdominal pain is caused by a dose of 0.5–2 g. The most used preparations are dried powder, tinctures, infusions, and fluid extract. (25)

Liver Health
There is some evidence of the protective potential of this herb against liver injury due to multiple causes (26)  In another study Turkish Rhubarb targeted liver metabolic and immune pathways and may be beneficial for complex metabolic diseases such as fatty liver disease. (27)

Antiviral
Study results provide a molecular basis for the development of emodin as a novel and safe antiviral agent for human enterovirus and respiratory virus infection in clinical therapy. (10)

Cholesterol-lowering
Data has also suggested that emodin from RP had the potential value for the treatment of hypercholesterolemia. (high cholesterol) The underlying mechanism is probably associated with the binding capability to Bile acids and subsequent increased expression of Cholesterol-lowering enzymes. (14)

Anti-Cancer
One study suggests that several bioactive anthraquinones of rhubarb possess promising anti-cancer properties and could have a broad therapeutic potential. (7)

Colon Cancer
Another study suggests that RP extract may be used as a novel anti-metastasis agent for the treatment of human colon cancer cells. (9)

Liver Cancer
Further findings indicate that emodin from RP may be a potentially effective and safe drug to induce apoptosis of Liver cancer cells. (13)

Tongue Cancer
Other findings suggest that molecular targeting of MMP-9 mRNA expression by emodin, aloe-emodin, and rhein might be a useful strategy for chemoprevention and/or chemo-therapeutics of tongue cancers. (11)

Pancreatic Cancer
One study for the first time suggests that emodin from RP inhibits pancreatic cancer cell growth, which may be related to the demethylation of tumor-suppressor genes. The related mechanism may be through the inhibition of methyltransferase expression. (15) Another study provides important insights into emodin as an anti-invasive agent for the therapy of human pancreatic cancer. Oral administration of emodin significantly decreased tumor weight and metastasis compared to control. (18)

Cervical Cancer
The anti-tumor effect of emodin on cervical cancer in vivo and the possible underlying molecular mechanism require further study, while emodin has the potential to be developed as a chemotherapeutic or adjuvant agent for human cervical cancers. (16)

Breast Cancer
Results of another study not only provide insight into the mechanism of synergy between curcumin and emodin in breast cancer cells but also suggest a new and potentially useful approach for breast cancer therapy. (17)

Lung Cancer
Results have also demonstrated that the activation of enzymes is an important determinant of apoptotic death induced by aloe-emodin from RP. These results suggest that aloe-emodin induces cancer cell death. (20)

Conclusion
Considering the vast array of studies available and the broad range of benefits Rhubarb appears to be an invaluable addition to any herbal program.

The combination of effects will bring a sense of improved health and wellbeing to the average person not just those who are convalescent.

I have added Turkish Rhubarb to my Ultimate Herbal Health program in the following products for this reason.

I hope you have found this article helpful

(8) A Comprehensive and System Review for the Pharmacological Mechanism of Action of Rhein, an Active Anthraquinone Ingredient. PUBMED https://www.ncbi.nlm.nih.gov/pmc/articles/PMC4987408/

(10) Antiviral effect of emodin from Rheum palmatum against coxsackievirus B5 and human respiratory syncytial virus in vitro. PUBMED https://www.ncbi.nlm.nih.gov/pubmed/26670446

(12) Developmental changes in the composition of five anthraquinones from Rheum palmatum as quantified by (1) H-NMR. PUBMED https://www.ncbi.nlm.nih.gov/pubmed/23364921

(14) Hypocholesterolemic effect of emodin by simultaneous determination of in vitro and in vivo bile salts binding. PUBMED https://www.ncbi.nlm.nih.gov/pubmed/26964768

(15) Effects of emodin on the demethylation of tumor-suppressor genes in pancreatic cancer PANC-1 cells. PUBMED https://www.ncbi.nlm.nih.gov/pubmed/25891176

(17) Synergistic effects of curcumin with emodin against the proliferation and invasion of breast cancer cells through upregulation of miR-34a. PUBMED https://www.ncbi.nlm.nih.gov/pubmed/23771315

(21) Characteristics of emodin on modulating the contractility of jejunal smooth muscle. PUBMED https://www.ncbi.nlm.nih.gov/pubmed/22452333

(22) Molecular mechanism of emodin action: the transition from laxative ingredient to an antitumor agent. PUBMED https://www.ncbi.nlm.nih.gov/pubmed/17019678