Wild Yam is a little different from your conventional eating yam. The Wild Yam has powerful medicinal properties and was used to make the first birth control pills. Today it is used widely in the natural products industry to help balance sex hormones.

In this article, we will discuss what the active compounds are, how it works, and the supporting scientific evidence.

Also known as colic root, wild yam is a twining, tuberous vine. One species is native to North America; another is native to China. Both contain diosgenin and have similar medicinal properties. There are an estimated 600 species of yam in the genus Dioscorea. Many of them are wild species that flourish in damp woodlands and thickets, and not all of them contain the medicinally active part, diosgenin. (1)

Some species are grown specifically as a source of diosgenin for laboratories to use in making steroids. These species are generally not eaten due to a bitter flavor. Only about 12 of the 600 species are considered edible. (21) 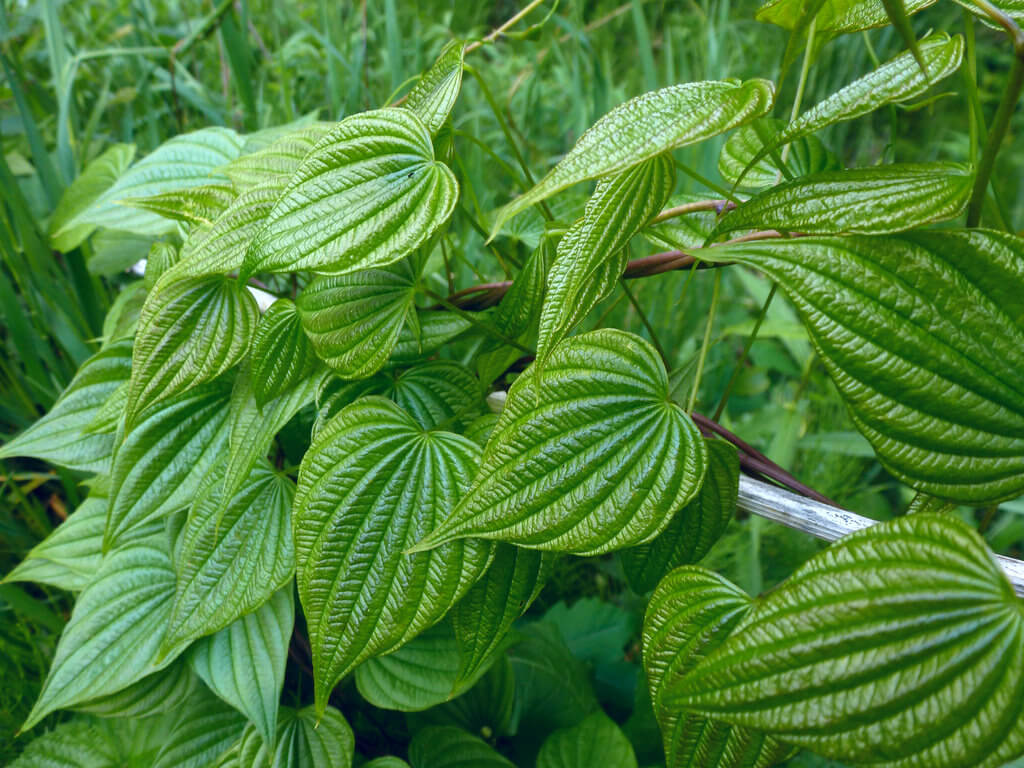 In the 18th and 19th centuries, herbalists used wild yam (Dioscorea villosa) to treat menstrual cramps and problems related to childbirth, as well as for upset stomach and coughs. In the 1950s, scientists discovered that the roots of wild yam (not to be confused with the sweet potato yam) contain diosgenin. Diosgenin is a phytoestrogen or plant-based estrogen, that can be chemically converted into a hormone called progesterone. Diosgenin was used to make the first birth control pills in the 1960s. (1)

Dioscorea villosa (DV) has been used in Brazil as an alternative medicine to attenuate menopause symptoms, as well as for the treatment of joint pain and rheumatoid arthritis. (14)

Some women apply wild yam creams to the skin to reduce menopausal symptoms such as hot flashes. (21)

Two groups of lipidated steroid saponins including seven new compounds were isolated from the widely used botanical, wild yam (Dioscorea villosa), employing a fractionation protocol of metabolomic mining. This methodology has very recently led to the isolation of 14 diarylheptanoids from the same plant. (15)

The rhizomes and roots of Dioscorea villosa is an important source of diosgenin, a phytoestrogen that has been investigated thoroughly from both chemical and biological perspectives. (15)

This steroid is of high industrial importance and has been the subject of interest to many researchers worldwide over the years. In fact, most of the therapeutically useful steroidal drugs, including sex hormones and corticosteroids, are produced in a semi-synthetic fashion from natural precursors and predominantly from diosgenin. (15)

Diosgenin itself has several important biological activities also with a great interest for the pharmaceutical industry. In fact, diosgenin has been described in the literature for its pharmacological potential, including the interesting underlying mechanisms of action, thereby confirming and extending the knowledge from its usage in traditional medicine. (15)

In this context, mainly over the past two decades, a series of preclinical and mechanistic studies have been performed to understand the real importance and benefits of diosgenin against a variety of pathologies including metabolic diseases (diabetes, obesity, and dyslipidemia, including hypercholesterolemia), inflammatory diseases, and cancer. (15)

Plain DHEA is not found in the Wild Yam plant, but the breakdown product 7-keto DHEA is produced from Wild Yam extract, diosgenin. Due to the similar nature of DHEA, Diosgenin and Wild Yam extract and their actions, I thought we should take a moment to investigate and understand this area better.

Dehydroepiandrosterone (DHEA) and its sulphate DHEAS are the most abundant circulating sex steroid hormones in women, providing a large precursor reservoir for the intracellular production of androgens and oestrogens in non-reproductive tissues. Levels of DHEA and DHEAS decline with age. It has been proposed that restoring the circulating levels of these steroids to those found in young people may have anti-aging effects and improve well-being and sexual function. (3)

Dehydroepiandrosterone (DHEA) is an abundant circulating androgen precursor preferentially produced by the adrenal glands. DHEA has been shown to exert its effects via downstream conversion to sex steroid hormones, neuromodulation, improvement in endothelial cell function, and possibly by acting on a cell membrane-bound receptor. Low levels of circulating DHEA have been demonstrated in women with diminished libido and other symptoms of sexual dysfunction. (6)

Dehydroepiandrosterone (DHEA) and its ester dehydroepiandrosterone sulfate (DHEAS) are produced by the adrenal glands. These hormones are inactive precursors that are transformed into active sex steroids in peripheral target tissues. After a peak in early adulthood, there is a marked decrease in plasma concentrations throughout adult life. These hormones are thought to affect mood and well-being, have neurosteroid effects, and may influence the immune system. (7)

With the evidence currently available, however, one can reasonably suggest that dehydroepiandrosterone offers the promise of safe and efficient replacement therapy for specific symptoms common to postmenopausal women. (2)

Beneficial effects seem plausible in women with several conditions according to the results of double-blind placebo-controlled trials: the dose of 30 to 50 mg seems beneficial to the mood, sense of well-being, and sexual desire and activity of women with adrenal insufficiency. The only long-term trial of supplementation devoted to women over 60 reported significant increases in bone mineral density and, in the 70-79-year-old subgroup, in sexual desire, arousal, activity, and satisfaction. (8)

The dose of 200 mg also proved to decrease disease activity in systemic lupus erythematosus. Lastly, high DHEA doses have improved mood in various groups of patients of any age and gender with depressive symptoms. The use of DHEA therapy may also be discussed in women of any age when a trial of androgen supplementation seems justified because of the existence of an inhibited sexual desire or a sexual arousal disorder associated with documented androgen deficiency. (8)

So what about 7-Keto DHEA, what’s the difference?

7-keto DEHA and DHEA – The difference between them

The major difference between DHEA and 7-Keto DHEA is that DHEA converts to testosterone and estrogen while 7-Keto DHEA does not convert into these two sex-related hormones. (11)

7-keto DHEA would also have a distinct advantage over DHEA as a treatment for alcohol abuse and dependence in that it does not act as a precursor for the sex hormones. (10)

7-keto DHEA has been shown to be well tolerated in humans at doses as high as 200 mg/kg and is available over the counter as well as in some nutritional supplements. These characteristics of 7-keto DHEA suggest that it may have therapeutic advantages over DHEA (10)

Because the treatment of menopause with synthetic hormones might lead to increases in cholesterol, our findings suggest that Wild Yam dry extract could be regarded as a safer phytomedicine to control climacteric symptoms without causing side effects on serum fat levels. (14)

Because there are so many constituents in Wild Yam we will discuss only the two major therapeutic components here.

Diosgenin, a steroid saponin that is found in a number of plant species, is reported to be a promising bioactive biomolecule with diverse important medicinal properties, including hypolipidemic, hypoglycemic, antioxidant, anti-inflammatory, and antiproliferative activities. (16)

Anti-cancer
Several preclinical studies investigated the effects of the diosgenin as a chemopreventive/therapeutic agent against cancers of several organs, and this has demonstrated the high interest of this molecule as a potential antitumor agent. (16)

Diosgenin also has antimetastatic effects; for example, it was demonstrated that it can inhibit the migration of human breast cancer. (16)

Immune function
The anti-inflammatory activity of diosgenin is a known relevant effect of this steroid and has a relevant interest in a variety of pathologies. (16)

Anti-inflammatory
As osteoarthritis is characterized by progressive destruction of articular cartilage and synovial inflammation, diosgenin can also be of interest in this disease due to its anti-inflammatory and immunomodulating properties. (16)

Obesity
Diosgenin can be useful in the treatment of diabetes by promoting adipocyte differentiation and by inhibiting inflammation in adipose tissues. Therefore, diosgenin may be useful to improve the patient’s condition in the glucose metabolic disorder associated with obesity. In this context, in other experimental models, it was observed that diosgenin led to a reduction of plasma and hepatic triglycerides in obese diabetic mice and may be useful for the management of diabetes-related hepatic dyslipidemias. (16)

Post Traumatic Stress
Recently, five cases of “remarkable benefits” have been reported after extremely treatment-resistant patients with PTSD were administered 7-keto DHEA (25–150 mg per day) in an open-label manner. All five of these patients had baseline serum DHEAS concentrations in the lowest quartile of the normal range.

The responses in the patients were rapid, occurring within days, and were both subjectively and objectively discernible. 7-keto DHEA was chosen instead of the parent compound DHEA because the 7-keto moiety is not aromatized to testosterone or estrogen and because it may have superior anti-glucocorticoid properties. (17)

Addiction
7-Keto DHEA has been shown to decrease the drive to consume alcohol. Common adverse effects in women taking 200 mg of DHEA per day include acne and hirsutism. These effects may be averted, however, by administering 7-keto DHEA, which is not converted to sex hormones and reduces alcohol intake similarly to DHEA.

7-Keto DHEA is relatively non-toxic to the body. It may eliminate or significantly reduce the possible side effects of plain DHEA. It is also more thermogenic and supports peripheral blood circulation. As an ergogenic (thermogenic) steroid, 7-oxo-DHEA, which is available without prescription as the trademarked 7-keto DHEA, may be very helpful in the prevention of primary Raynaud’s attacks by increasing the basal metabolic rate and inhibiting vasospasm. (13)

The obtained data from another study demonstrated that 7-oxo-DHEA is a more potent metabolic modulator than plain DHEA. (20)

It was concluded that Dioscorea Villosa (Wild Yam) Root Extract is safe as used in cosmetic formulations. This conclusion regarding safety, however, is valid only for extracts prepared in a manner that produces a similar chemical profile as that described in this report, particularly as regards diosgenin. (12)

No adverse effects were reported in postmenopausal women using DHEA for 52 weeks at the dosage of 50mg daily. (4)

Findings indicate that oral Wild Yam promotes no morphological changes in the vital organs of animals and suggest that this substance produces no toxicological effects. (14)

There is a long history of Wild Yam being used to support hormonal health and an emerging body of evidence to support this tradition.

Wild Yam extracts contain hormonally active compounds such as Diosgenin and 7-Keto DHEA which have proven to support the immune system, balance addictive behaviour, reduce stress and support metabolism and circulation. All of these functions lean towards helping control a negative eating pattern and losing weight by way of supporting the body in a holistic fashion.

Wild Yam Extract in the form of 7-keto DHEA (50gm per capsule/sachet) can be found in the following products:

(2) The clinical use of dehydroepiandrosterone in postmenopausal women. PUBMED https://www.ncbi.nlm.nih.gov/pubmed/23965649

(3) DHEA therapy for women: effect on sexual function and wellbeing.

(4) The safety of 52 weeks of oral DHEA therapy for postmenopausal women. PUBMED https://www.ncbi.nlm.nih.gov/pubmed/19410392

(18) HUM5007, a novel combination of thermogenic compounds, and 3-acetyl-7-oxo-dehydroepiandrosterone: each increases the resting metabolic rate of overweight adults. PUBMED https://www.ncbi.nlm.nih.gov/pubmed/17418559/