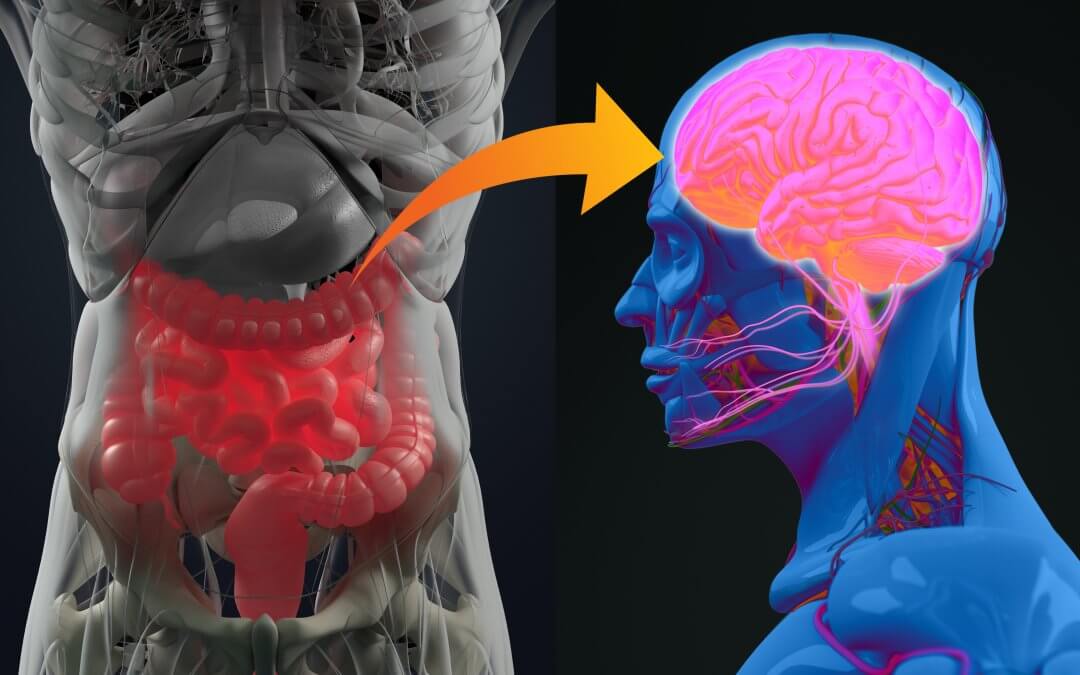 There has been a lot of talk about the gut-brain axis in recent years, like it’s a new thing, but when you think about it we have always known about this connection.

For example, we have adopted these common turns of phrase.

The past decade however, has seen a paradigm shift in our understanding of the brain-gut axis. The exponential growth of evidence detailing the bidirectional interactions between the gut microbiome and the brain supports a comprehensive model that integrates the central nervous, gastrointestinal, and immune systems with this ‘newly discovered’ gut-brain axis (GBA). (2)

Data from preclinical and clinical studies have shown remarkable potential for novel treatment targets not only in functional gastrointestinal disorders but in a wide range of psychiatric and neurologic disorders, including Parkinson’s disease, autism spectrum disorders, anxiety, and depression, among many others. (2)

In this article we are going to explore some of the mechanisms employed within this gut-brain interface and how it affects our mental and physical health.

Hopefully, this can help you understand what practical things you can do to improve both gut and brain health, and overall happiness.

Please feel free to comment or ask questions at the foot of this page.

Because the majority of the information highway (90%) between the gut and the brain is upwards from the gut, disturbances to gut health can affect our moods and mental health. Here are some common gut problems we can address to potentially improve mental health.

You can follow the links to read more on each condition, but right now, let’s talk about how our gut health actually has its effect on our brain and mental state.

Mental health problems are increasing at disturbing rates across the world.

Findings pooled across 174 surveys indicate that on average one in five adults (17.6%) experienced a common mental disorder within the past 12 months compared with one in three adults (29.2%) across their lifetime. (1)

Standard pharmaceutical medicines target brain chemistry often with serious side effects, one of which is suicidal tendencies, which is also a rising concern.

If the persons mental health problem is being driven by emotions and the gut, then it’s no wonder that masking the problem with pharmaceuticals ultimately fails, and the gut feelings and emotions eventually could become overwhelming.

It makes sense that these people would also likely experience related digestive issues, and emotional or addictive eating habits, making the Gut-Brain link a priority when it comes to understanding both our physical and mental health.

It’s the combination of gut health and how this affects brain chemistry thats of the most interest, and it’s multifactorial as you will see below. 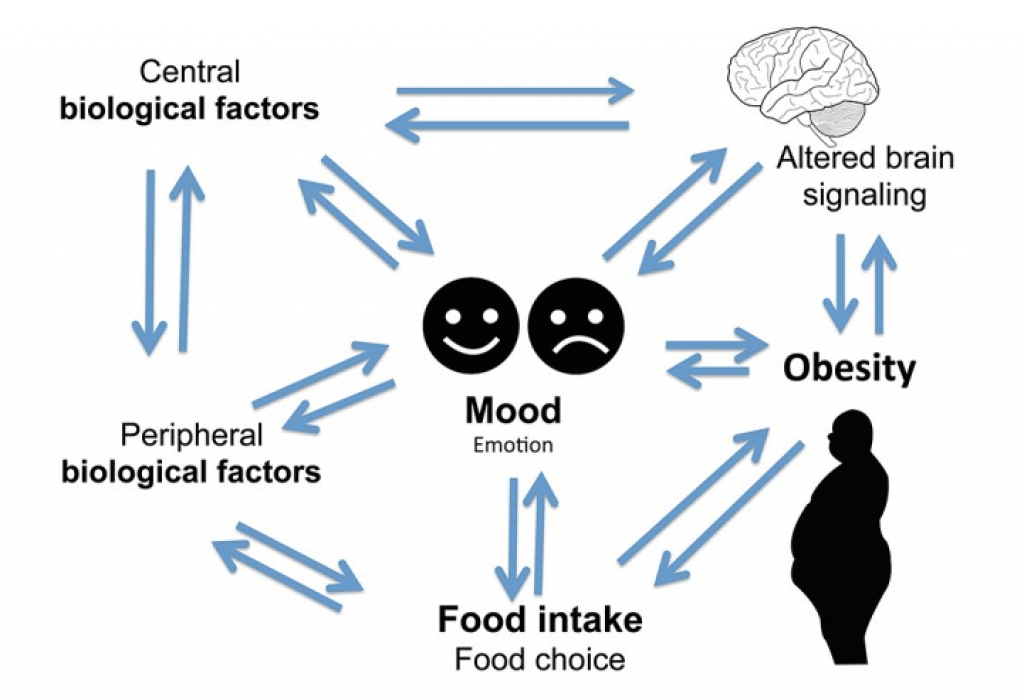 Altered mood can also lead to altered food choice, and intake, leading to overeating and obesity. This is often called ’emotional eating’. Research findings from human and animal studies support a two-way link between three concepts, mood, food, and obesity. (3)

Why do we reach for the wrong thing when we are going through a tough time emotionally? It’s probably because we want a quick fix, and that’s what most of the high calorie, sugar, chemical additive and fat-rich foods can do. They give us a quick rush of energy to the brain which temporarily lifts our mood. Drugs and alcohol are commonly used for this very same reason.

The downside is, that the hormonal rush created by these stimulants does not last long, and in-fact the negative rebound effect is even more profound. We end up feeling worse for longer than we felt better, so we instinctively reach for the next hit. This is how emotional substance addiction begins.

We all know that stress and emotions affect our Gut, but just how profound are these effects?

These are just some examples, so let’s look deeper into how this gut-brain axis (GBA) actually works? 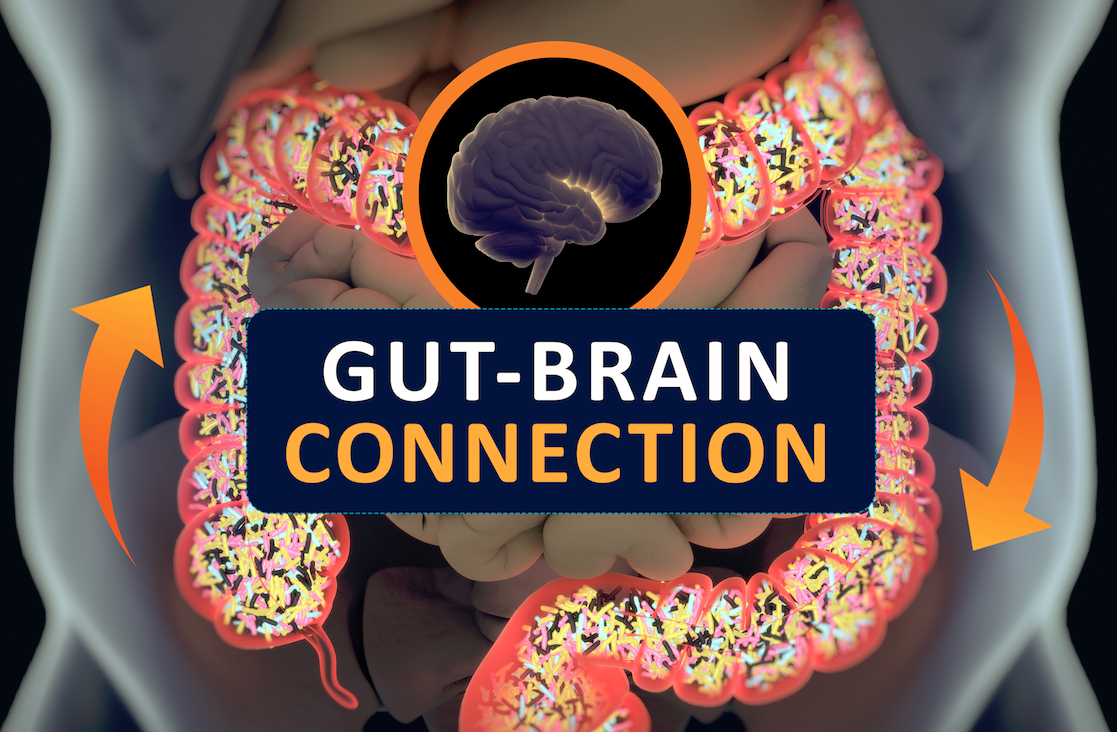 The vagus nerve represents the main component of the parasympathetic nervous system, which oversees a vast array of crucial bodily functions, including control of mood, immune response, digestion, and heart rate. It establishes one of the connections between the brain and the gastrointestinal tract and sends information about the state of the inner organs to the brain via afferent fibers. (4)

There clearly is “communication” between the vagal nerve and gut neurons, and the main transmitter is cholinergic activation through nicotinic receptors. Interaction of gut neurons and the vagal nerve as a part of the Central Nervous System (CNS) leads to a bidirectional flow of information. Evidence to date relies on vagal receptors that sense regulatory gut peptides, inflammatory molecules, dietary components, and bacterial metabolites to relay signals to the CNS (brain). (2) 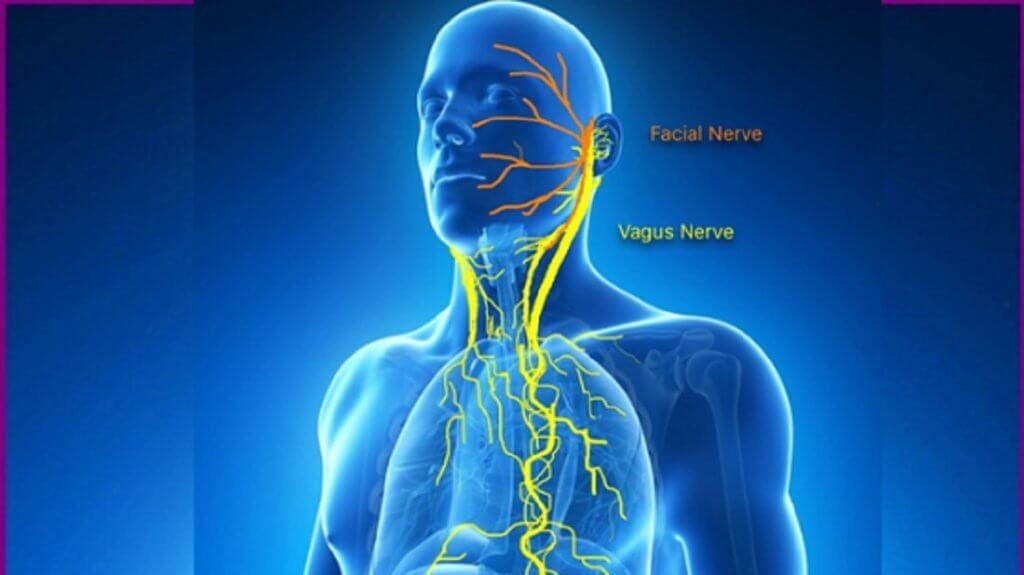 There is preliminary evidence that vagus nerve modulation is a promising add-on treatment for depression, post-traumatic stress disorder, and inflammatory bowel disease. Treatments that target the vagus nerve increase the vagal tone and inhibit inflammation. Both are important mechanism of mental resiliency. (4)

The modulation of vagal nerve fibers in the gut influences brain systems in the brain stem that play crucial roles in major psychiatric conditions, such as mood and anxiety disorders. (4)

There is preliminary evidence for gut bacteria to have beneficial effect on mood and anxiety, partly by affecting the activity of the vagus nerve. Since, the vagal tone is correlated with capacity to regulate stress responses and can be influenced by breathing, its increase through meditation and yoga likely contribute to resilience and the mitigation of mood and anxiety symptoms. (4)

This diagram shows how the vagus nerve is connected to the digestive organs including the stomach, liver and intestines. 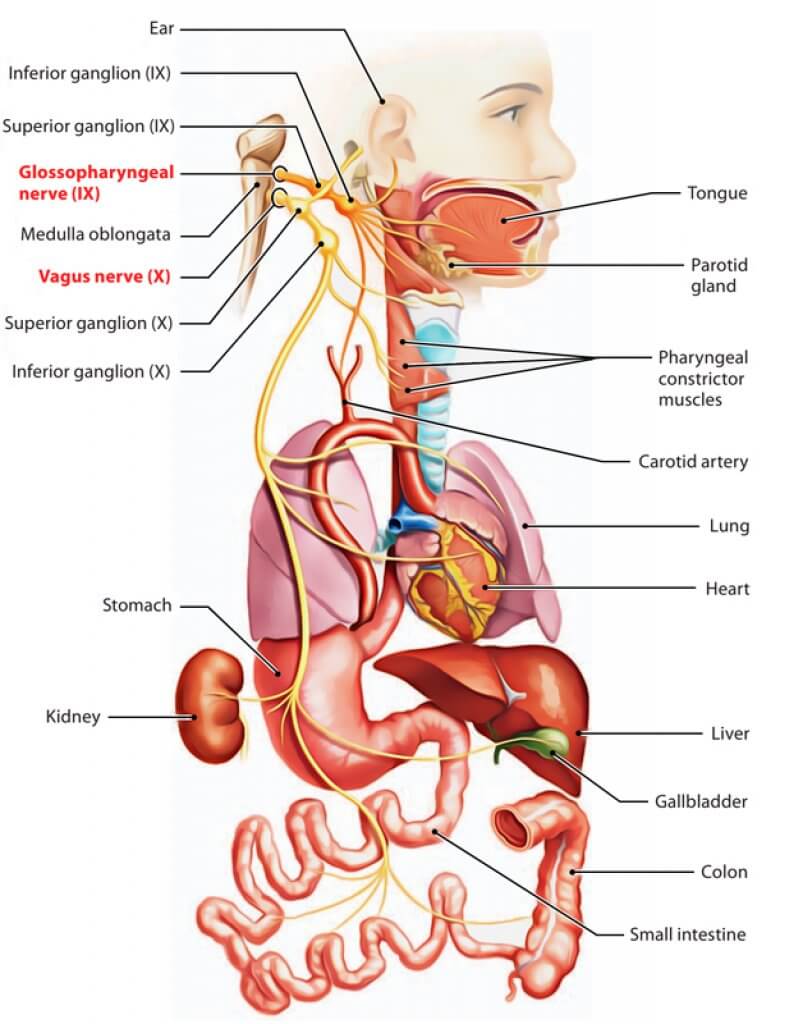 An important pathway by which gut microbes communicate with the Central Nervous System (CNS) involves the cells making up the endocrine (hormonal) system of the gut, called the enteric endocrine system (EES). (2)

These EES cells live between normal ‘gut wall’ cells throughout the length of the gut and contain more than 20 different types of signalling molecules. They are released in response to chemical and or mechanical stimuli, and these molecules can enter the blood circulation and reach centers in the CNS involved in ingestive behavior or act locally and activate in the gut or liver to generate brain signals. A series of receptors involved in the regulation of satiety and hunger have been identified on these cells. (2)

Serotonin (5-HT) Regulation
One of the best characterized examples of these microbial interactions is the bidirectional interaction between microbes, EES’s, and the central nervous system. Serotonin is produced by the EES’s with 95% of the body’s serotonin stored in gut neurons, and only 5% stored in the CNS and brain. (2)

The essential amino acid tryptophan (Trp) is a key molecule in the Gut-Brain-Axis (GBA) because it is the precursor to the neurotransmitter serotonin, and a number of other metabolites that contribute to the neuroendocrine signalling within the GBA. Because humans are unable to produce tryptophan, dietary intake of proteins that contain it serve as the primary regulator of its availability. (2) Milk and bananas are high in tryptophan and interestingly, they are known to help us relax and sleep.

Gut microbiota contribute to the peripheral availability of Trp, which is imperative to the CNS synthesis of serotonin. Although the exact mechanisms of peripheral Trp regulation are unknown, one study suggests that the microbiota modulate the degradation of Trp. In a separate study, this pathway interaction was observed and linked to behavior. (2) 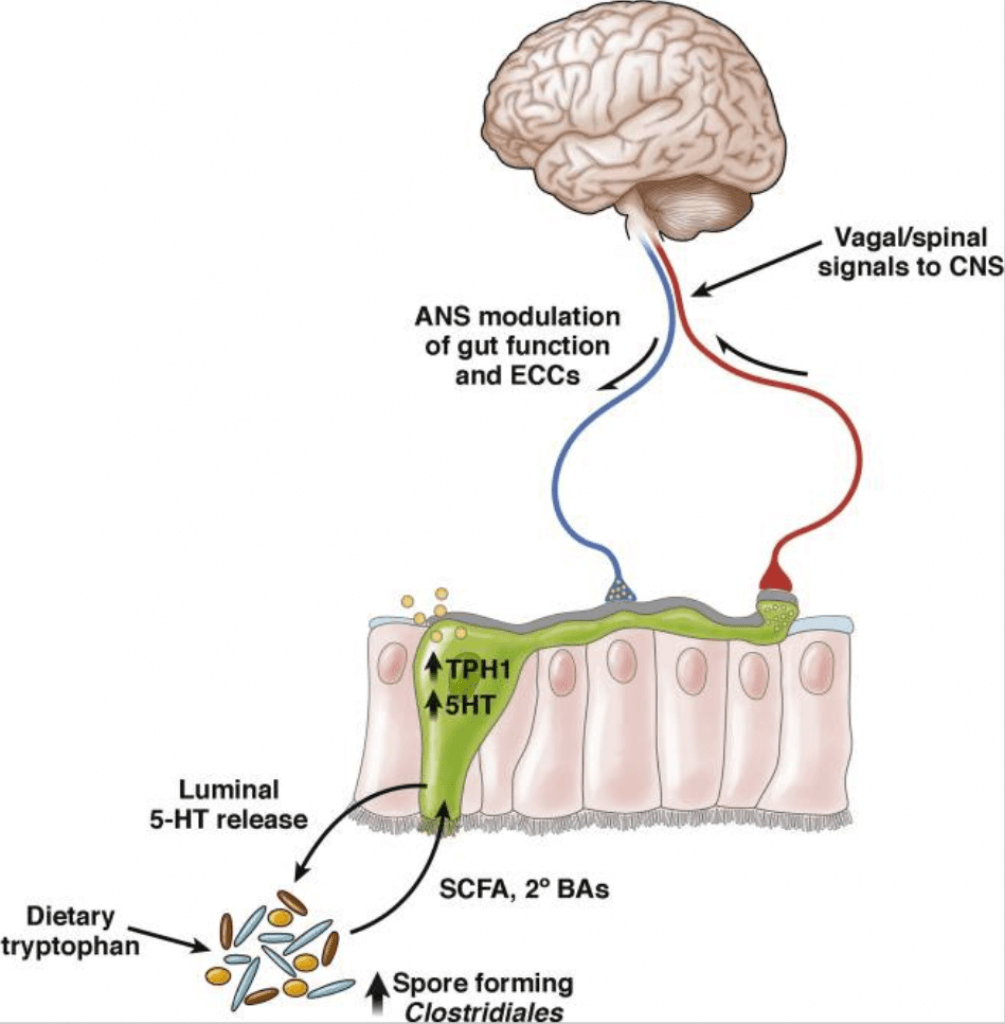 There is more than 40 years worth of literature showing the effect of stress on the community structure of the gut microbiome. Exposure to social stressors for as little as 2 hours can change microbial community profiles and relative proportions. (2)

The key thing to note is that 95% of the body’s serotonin is stored in the intestinal neurons and this hormone is largely responsible for our feelings of emotional happiness and bliss. Because the signals “downward” from brain to gut through vagus nerve fibers account for only 10–20% of all fibers and the “upward” from the intestinal wall to the brain accounting for 80–90% of all fibers, the gut is sending the majority of neural information upwards to the brain. (2)

Carbohydrate consumption increases serotonin release; while protein intake lacks this effect. This ability of neurons to couple neuronal signaling properties to food consumption is a link in the feedback mechanism that normally keeps carbohydrate and protein intakes more or less constant. However, serotonin release is also involved in such functions as sleep onset, pain sensitivity, blood pressure regulation, and control of the mood. Hence many patients learn to overeat carbohydrates (particularly snack foods, like potato chips or pastries, which are rich in carbohydrates and fats) to make themselves feel better. This tendency to use certain foods as though they were drugs is a frequent cause of weight gain, and can also be seen in patients who become fat when exposed to stress, or in women with premenstrual syndrome, or in patients with “winter depression,” or in people who are attempting to give up smoking.

It’s no wonder that this serotonin, feel good, combination effect leaves us becoming addicted to foods, especially those junk/snack foods that trigger the release of serotonin sending pleasure signals to the brain and giving the consumer that quick-fix or high. (6) 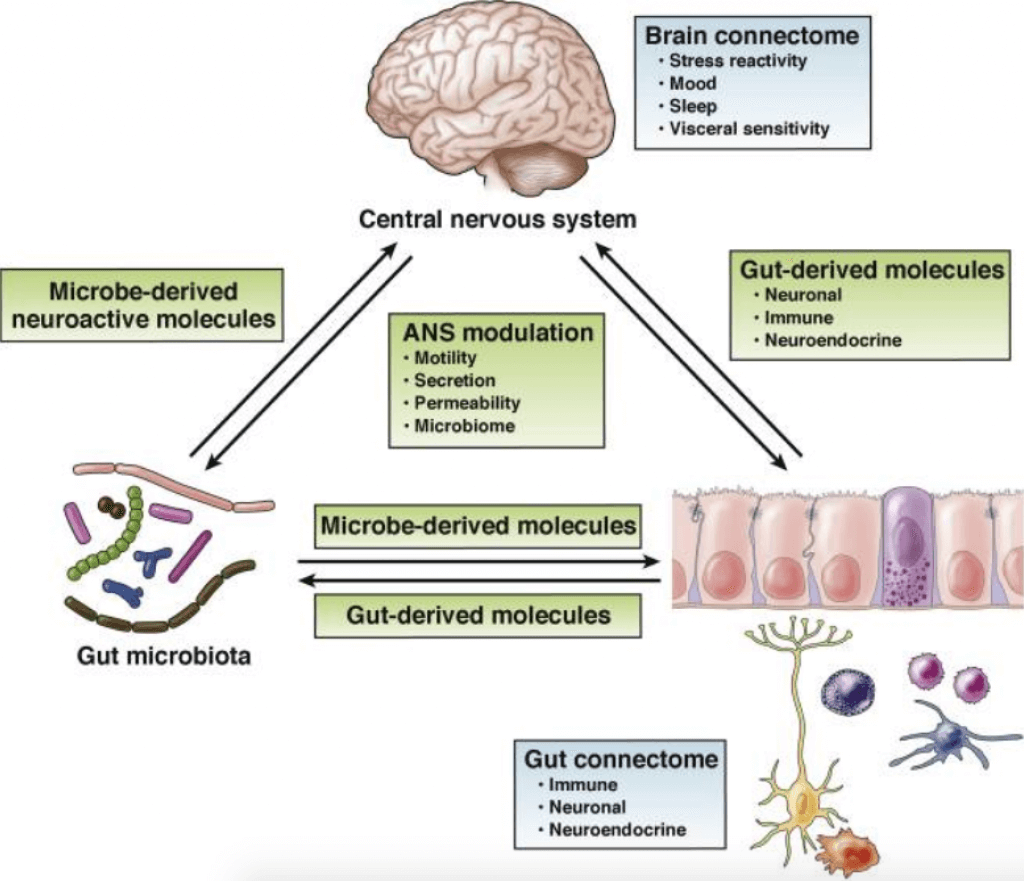 Animal models of intestinal inflammation have both confirmed the data from human studies and expanded our knowledge of the potential mechanisms underlying the role of mucosal serotonin in enteric inflammation and/or infection. (5)

This is a vast subject and we could have written much more, but in this instance we have focused on the GBA it’s mental health implications, especially around food and gut health.

Because I have a vast experience with people completing a Herbal Detox Porgram, which involves a diet of pure fuirts and vegetables, I have seen thousands of my clients recover gut health. The surprising thing for many people is the sense of mental wellbeing, happiness and peace they also experience after the detox.

The gut brain axis gives a clear explanation of why people feel so good on this program.

According to the research above, the over cosumption of processed foods high in sugar, additives and fats causes a huge increase in serotonin release from the gut and brain. This is similar in effect to many addictive drugs, like alcohol and cigarretes, giving rise to food addiction.

These foods also inerfere with healthy gut microbiome and inflammatory bowel diseases, and the spin off, like any drug addiction can be depression, anxiety and other forms of mental distress.

The Solution
To stabalize serotonin levels in the body and restore both gut and mental health a healthy diet needs to be followed. This will include high fibre prebiotic foods, anti-inflammatory antioxidant rich foods, and foods that supply a low processed sugar and fat content, such as a variety of fresh fruits and vegetables.

This is exactly what my 14-day herbal detox program contains and explains why so many gut health and mental health issues appear to be addressed simultaneously.

I hope you have found this article helpful and it has explained the gut-brain-axis in a clear fashion.

(4) Vagus Nerve as Modulator of the Brain–Gut Axis in Psychiatric and Inflammatory Disorders. PUBMED https://www.ncbi.nlm.nih.gov/pmc/articles/PMC5859128/